Baker, Florida
Back to Testimonials

“We decided to go with the T-L pivots primarily for the safety issue offered by the hydraulic drive rather than electric drive.”

There probably isn’t a farmer in America who wouldn’t like to either increase yields or reduce the input costs related to crop production. Yet, Nick Marshall, who grows around 2,500 acres of cotton and peanuts near Baker, Florida, has been able to do both.

As a third-generation farmer, who shares the operation with his father, James, Marshall has always been on the leading edge of innovation. As an example, the Marshalls have been strip-tilling their fields for more than 15 years now. They’ve also been planting cotton on 36-inch rows, with peanuts planted in double rows on 36-inch centers.

Marshall explains that even though two-thirds of their acres are planted to cotton and one-third to peanuts, they try to rotate several fields annually between the two crops to avoid any disease problems. To reduce the chance of wind erosion on the farm’s sandy soils, they also plant a cover crop of wheat behind both peanuts and cotton after harvest. Then, about a month before planting time, they spray the crop with Roundup® and strip-till the field for planting.

To conserve fertilizer in their sandy soil conditions, Marshall explains that they split applications over several stages. It starts with diammonium phosphate (DAP) on both peanut and cotton acres, which is variable-rate applied ahead of the planter based on grid samples.

“We then put the cotton sidedress fertilizer on in two shots, because if we apply too much at a time in our sandy soils, it just leaches out and we lose it,” he explains. “In the meantime, we start applying a growth regulator at first square and then follow with applications about every 10 days to control vegetation height and encourage boll fill.”

The family’s agronomic practices are only half the equation, though. While conserving input costs, Marshall has also increased yields on several fields by adding T-L center pivot irrigation.
“This is our third year with irrigation,” he relates. “I put in two pivots three years ago and then added a third one last year. We tend to get plenty of early spring rains,” he adds, noting that he typically plants cotton in mid to late April. “But it’s not unusual to see several days of dry weather right about the time the cotton bolls are forming.

Being totally new to irrigation, though, Marshall says they didn’t know what to look for when buying a pivot system.

“As a result, we’ve purchased all our pivots through Jacky Helton with Helton Irrigation,” he adds. “We really haven’t had any problems with the pivots, yet any time we’ve had a question, Jacky answers the phone or comes right over. So the service has been excellent.”

Marshall notes that of the three T-L pivots they currently own, two of them make a full circle, while the third does a half circle for a total of around 300 acres. All three, however, are equipped with T-L’s Precision Link web-based monitoring and control system. “I like being able to just roll over in bed and look at the cell phone to check on the pivots,” he says, while admitting that he also enjoys the ability to monitor the pivots when he has the chance to go fishing in the Gulf of Mexico. “I can stop a pivot from my phone, see which direction it is traveling and tell exactly where it is in the field without ever having to get up. It also calls me if it stops for any reason; so it’s been a big help.”

Marshall says pivot control is especially important with their sandy soils. In fact, he insists that 1/2 to 6/10ths of an inch of water is all they can put on at a time. Otherwise, it seeps through the soil profile too quickly and is lost, which makes it even harder for their 1,200-gallon-per-minute well to keep up.

Having grown two crops of cotton under the pivots since the T-L purchase, Marshall now has peanuts under all three units for 2017.

“I don’t expect to see the same kind of response to irrigation with peanuts as we did with cotton,” he concludes. “But I certainly think there will be a noticeable difference between peanuts that are irrigated and those that aren’t irrigated, especially if the rains suddenly stop mid-season. It was for that type of insurance that we put them up in the first place.” 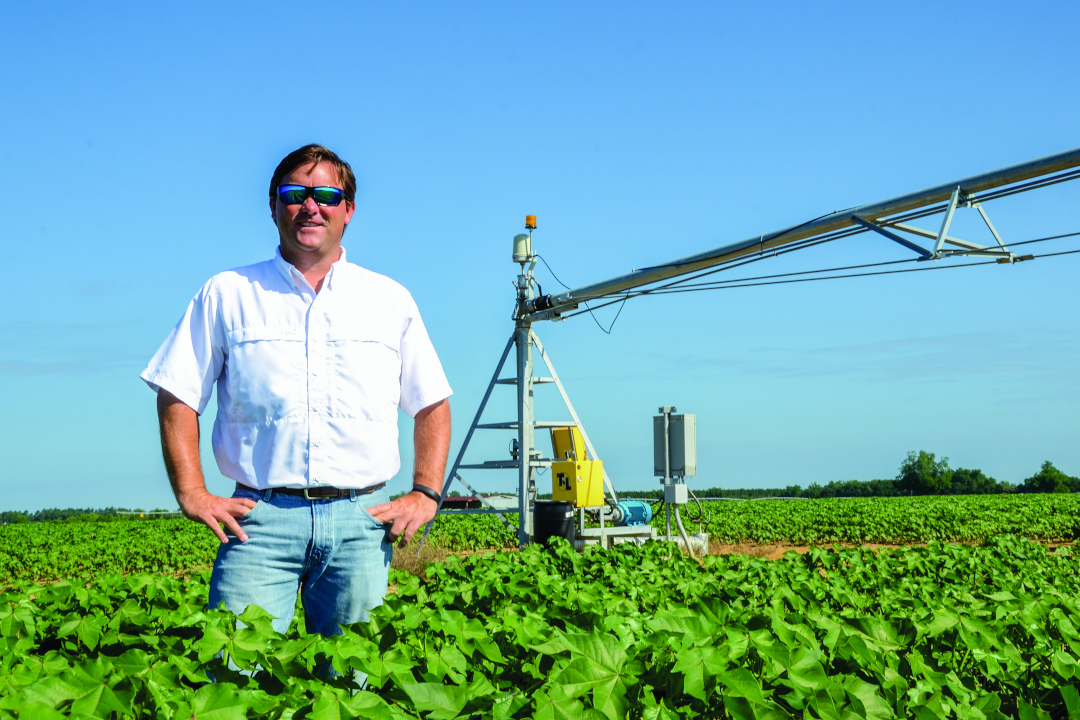