Fulton, Arkansas
Back to Testimonials

"In a way I guess you could say it's paid with the first crop of turf I sell, because I couldn't produce it without irrigation."

“Back in 1997, I checked out every single brand of center pivot sprinkler. Then I talked to three or four farmers who had used each brand,” Henry Struckman recollects. “I checked how well built the machines were and their reliability, and also looked at maintenance records.”

It was the hydraulic design of the T-L’s that really convinced him, plus how strongly they were built. Also, the farmers who’d used T-L’s for four or five years had yet to experience any problems with them. That’s why he bought four T-L’s, with a fifth soon to be added to his current 800 acre turf farm operation, Fulton Grass Company, of Fulton, Arkansas.

Although he prefers center pivots, due to field dimensions, he also has had to rely on some wheel rolls and flood irrigation. Struckman realizes that he couldn’t be in the sod business without relying on irrigation.

He says those who have tried sod farming without supplemental watering are simply not in the business any more. Annual rainfall averages 47 inches in his area, yet growing quality sod requires him to add greater amounts of water at just the right time.

As he remarks, “Turf grass just takes a lot more irrigation fine tuning than other crops.” In fact, during this past summer, he never turned off his T-L center pivots. Depending on soil type, he varies speeds during rotations and applies anywhere from one to two inches each round. Labor savings are a big, big plus for his T-L’s, according to Struckman.

He points out, “I handle approximately 600 acres of sod under the center pivots by myself. However, on the remaining 200 acres of sod, it takes two people moving wheel roll sprinklers six days a week to get the turf covered.”

Then there’s the wind problem with wheel rolls. Twice a day, they must be shut down and drained dry before being moved. Otherwise, the thin aluminum pipe that functions as the axle would be torn up. When dry, they’re extremely vulnerable to a strong wind.

“Oh, my! You park the wheel rolls at, say, 4 p.m. and drain them so you can run them that night. That’s just about the time a big, black thunderstorm comes rolling in to pick them up and totally destroy them,” he exclaims.

Back in his row-crop days, Struckman had a large electric center pivot system. He says, “I just never felt comfortable with it. It doesn’t take smarts to know that water and electricity don’t mix! A T-L is just so much easier to run. I also like the steady movement it makes. And, if a T-L gets stuck, which can happen in some of my heavy clay gumbo soils, it’s so easy to get it started again.”

During the nearly two decades since he installed his first T-L system, Struckman reports that his total maintenance has involved draining gearbox water and topping off the oil tank. He also changes the filter at the center pivot a couple of times a year. He has never had to replace a seal or a gearbox.

“How long does it take to pay off a T-L system?” Struckman repeats a question other farmers have asked him. “In a way I guess you could say it’s paid with the first crop of turf I sell, because I couldn’t produce it without irrigation. Sure, I could use all wheelrolls, but, I would never have this much acreage in grass production due to the tremendous amount of labor they require.

In common with most farms in the area, the Struckman farm was basically all rowcrop until 1985–and he was continually looking for a crop that would consistently make money. First, he looked at growing Christmas trees, then tried the “alternate crop” of fish farming.

Finally, after a careful check of the potential, came turf farming. “Four years ago, I had 400 acres of turf,” Struckman recalls. “When I reached 600 acres, I said I wasn’t going to grow any more. Now I have 800 acres, and am now putting in another 300 acres!”

He sells wholesale off the farm, although 50 to 60 percent of his grass goes directly to two retail stores in Bossier City and Shreveport, Louisiana, that he owns and his son manages. 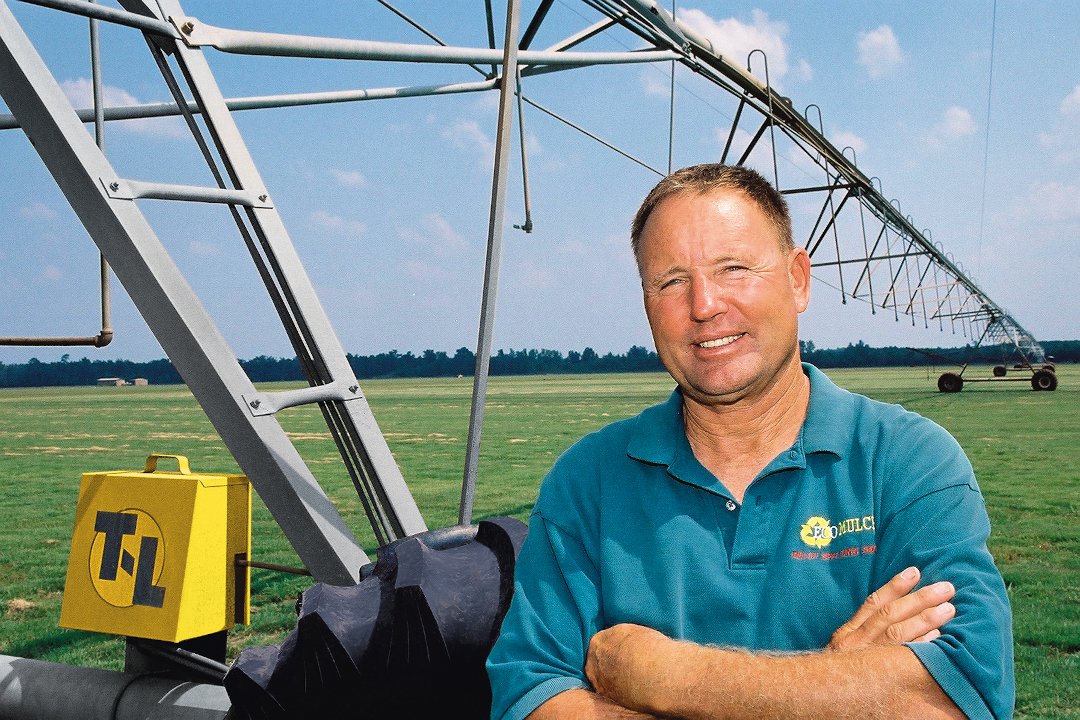