"It's just not about looks. T-L's are a solid piece of equipment. They're durable and ours don't show any signs of rust or breaking down after a considerable amount of use."

Even though he farms half-way around the planet and “down under”, Greg Lovett and many of his fellow south island New Zealand farmers share problems similar to those experienced by farmers in much of North America.

A decade or two ago, most farmers didn’t feel that water usage could be restricted. Now, however, it’s realized that water is a precious commodity and that serious steps must be taken to conserve what’s left.

On the Canterbury Plains where he farms, some years there’s enough rainfall that minimal supplemental water is needed. For most other years, being able to irrigate means making a crop or not, or at best crops with reduced yields.

His first experience with irrigating was using “guns”. They helped, but due to wind drift were quite inefficient and irrigated unevenly, especially as wind speed increased.

Lovett’s solution, 12 years ago, was to install his first of ten T-L linear pivots. He didn’t just walk into a T-L dealer’s store with an open checkbook, however.

“I first talked with an experienced independent irrigation system serviceman who works with all brands and had no particular affiliation,” he recalls. “I asked which system he would buy.

“He told me that if there was a problem with a T-L he could learn what was wrong and have it fixed within an hour. On the other hand, an electrical machine might take him up to 24 hours to locate the fault and solve the problem.

“Since my ability to fix anything electrical was never all that great, this was a selling point for T-L as far as I was concerned,” Lovett continues. “Also, electricity is always a concern with water present.”

About this same time, Lovett was considering an electrical brand and the “competition” gave him a special demonstration. The demonstrator turned a switch off and was about to pull a cable out, then exclaimed, “Oh, no, it’s the other switch!” That episode was game, set and match for Lovett.

“Here was a man who knew what he was doing, and you just know that if it’s possible for him to do something wrong, it’s going to happen to me some day. Our employees are skilled at running equipment and by themselves, but…”

So, combined with the system’s simplicity, the choice was T-L. In the rare instance of a needed repair, he figured his people would generally be able to make any fixes themselves.

In 12 years the only failure Lovett has experienced with a T-L is replacement of a single gearbox, and, he points out, that to be fair it was under extreme load. The system was still under warranty, and except for general maintenance that’s the extent of his T-L repair history.

“It’s just not about looks. T-L’s are a solid piece of equipment. They’re durable and ours don’t show any signs of rust or breaking down after a considerable amount of use,” he says.

He also comments that T-L’s company support has been tremendous whenever he’s had a question, even though they’re 12,000 miles away.

A T-L feature that Lovett finds most appealing is their continuous movement, especially on his intensely farmed acres.

As he notes, “We find that low pressure nozzle applications are uniform — and since water is getting more expensive every year it allows us to spread our allocation over a larger area. We benefit in greater yields, lower costs in producing a crop and more money.

Before making his most recent T-L purchases, just for the record, Lovett obtained prices from three electric system competitors. The T-L’s were “competitively priced and no more expensive than any other piece of equipment.”

Although Lovett anticipates a T-L will pay off in ten to 15 years he admits that it could happen much quicker than that. “Because,” as he says, “in some years without irrigation we wouldn’t get any crops at all. Dryland farming in our area isn’t possible any longer.”

Quite often other farmers considering a switch in pivot systems drop by to ask Lovett what he really thinks about his T-L linear pivots.

“I can only tell them how our T-L’s stack up for us today: Simple, durable, reliable.”

“A PLC is quite flexible in its ability to move from one crop to another either day or night without anyone being there,” he explains.

“For instance, in a 400-meter run we may have three or four different seedlings in that one run. The PLC will change speed depending on which crop is being watered. With broccoli, as an example, we might have some that’s just been transplanted and some that’s almost ready to harvest. So, different amounts of water are needed; typically one-half inch to one inch are applied.”

Lovett says that while they can do this with their other systems also, someone has to go out to the field at every change. But, with T-L’s PLC they can program all this into the machine and it will automatically adjust speeds and application rates, saving time and labor. 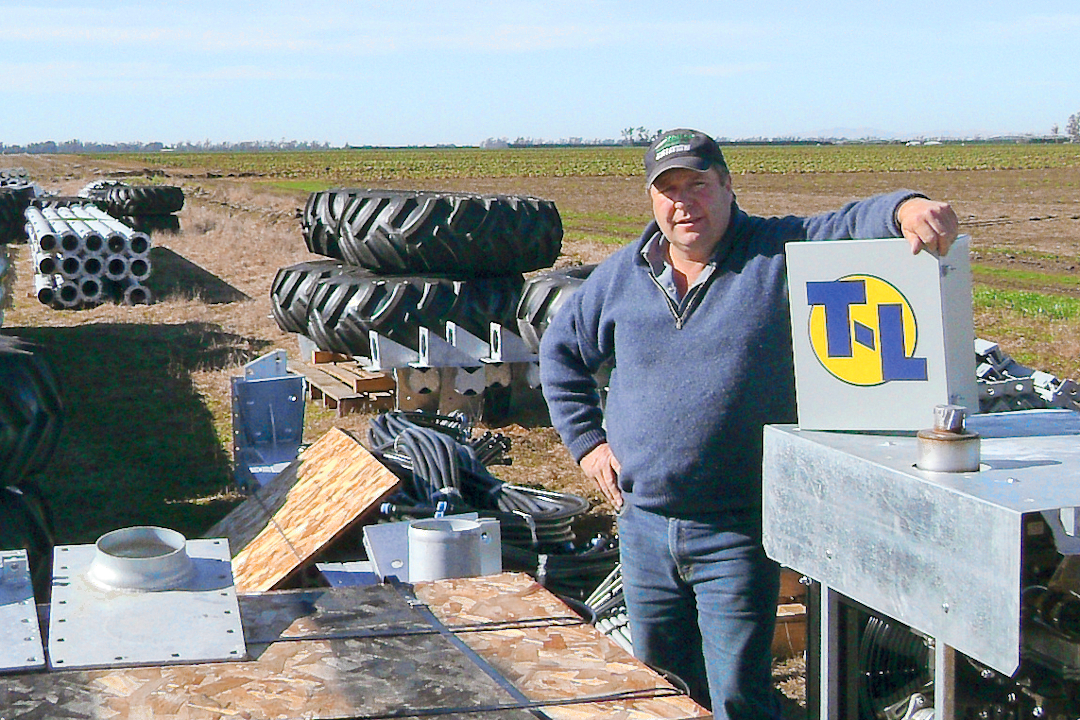