Republic, Kansas
Back to Testimonials

"My T-L's have been just so foolproof and consistent both in water patterns and my time and effort involved that I know they're the only way for me to go."

Flood irrigation demanded the work of up to four men on his farm. Now Dennis Erkenbrack has whittled that irrigation labor requirement down to himself. Alone.

“What center pivot systems have done for me is given me my life back,” he says with a smile. “Now I’m able to watch some of our grandkids play ball in the summer, we can do other things, and I can still get the irrigating done.”

He farms mostly in the sandy Republican River valley bottomland near Republic, Kansas. His main crops of corn and soybeans average 185 to 235 and 65 to 70 bushels an acre respectively. He operates five T-L’s of his own, one of them ten years old, and two electric units that came with rented land.

There are some basic differences between a T-L and an electric center pivot that tough conditions, really tough conditions, make readily apparent, Erkenbrack has learned. For example, he knows what happens when the clouds drop 14 inches of rain in eight hours. Obviously, the bottomland fields rapidly flood before center pivots and engines can be transported to high ground, and then the flood water can rise more than two feet above the wheels.

Clean up afterward requires removing driftwood and other debris. It also means that each sprinkler has to be checked over carefully and any necessary repairs made before irrigation can resume. The cost to get each T-L unit, including the one pictured, up and running again? A bit more than $200.

The expense to get the electric center pivot in the rented adjoining field, a brand new machine, working? $6,000, roughly 30 times as much.

“This was one of the things that convinced me about the value of hydraulics versus electrics if there’s any possibility of being subjected to flood water as mine are every few years,” Erkenbrack observes. “If you can keep hydraulic oil in the system, you ought to be able to keep water out,” says Erkenbrack.

“I’m sold on the fact that T-L’s can survive more than anything else I’ve been around. I don’t have to worry about whether or not a T-L is going to start up or run. I just expect it to, which it always does. That gives me a relaxed feeling,” says Erkenbrack.

Another fact that impressed him about T-L’s when deciding on his first center pivot buy was that, “hydraulics are something I can understand, so I knew that under most conditions I could fix a T-L myself.” Erkenbrack mentions that he’s never been fond of electricity or even liked to get close to an electric fence.

He admits, he’s not nearly as comfortable standing close to water and an electric center pivot as he is watching a hydraulic T-L on the go. “I also felt really comfortable with the consistent pressure and speed. None of my T-L’s have ever been stuck,” he adds.

Erkenbrack has experienced a little more trouble with corrosion and rust leading to more service calls each year on the two electrics. On the other hand, except for routine winter maintenance, he’s hard pressed to remember even one service call for a T-L other than a post flood check.

“My T-L’s have been just so foolproof and consistent both in water patterns and my time and effort involved that I know they’re the only way for me to go,” he explains. “The consistency and maintenance free operation I’ve had with my T-L’s is unbelievable.”

In early waterings, he tries to apply .80 of an inch with each application. Then, in hot August, he increases this to an inch or 1.2 inches.

“We couldn’t survive down here without pivot irrigation,” Erkenbrack is convinced. “When we were ‘gravity’, trying to get water into this sandy soil was like attempting to push a log chain. Water will run out of the sand quicker than the root system can catch up with it.”

“So, going with center pivot sprinklers has been a vital, vital part of being able to get both top and bottom ends of a field watered consistently,” he adds. “And, the real key has been getting the water where we want it when we want it, especially during those critical times with young plants.”

Another key advantage of center pivots he’s found is the ability to apply fertilizer through the system. It enables him to, “really, really baby that crop along.”

As for his overall philosophy of irrigation, Erkenbrack has some rather definite ideas.

“I think irrigation should make me money. It shouldn’t be costing me money,” he says. “While nothing in irrigation is cheap,” he continues, “if I had it all to go back and do over again I’d be more willing to spend a lot more money on irrigation than on other machinery. I believe the typical farmer can farm with a little less machinery and that the expense of irrigation isn’t nearly as significant as he thinks it is.”

Erkenbrack, in a sense, “retired” back to the farm. For 27 years, he was basketball coach and athletic director of Cloud County Community College in Concordia, Kansas. During those years, his teams always won at least 22 basketball games every season. He’s almost certainly the only Kansas farmer to be elected to the Kansas Basketball Hall of Fame. 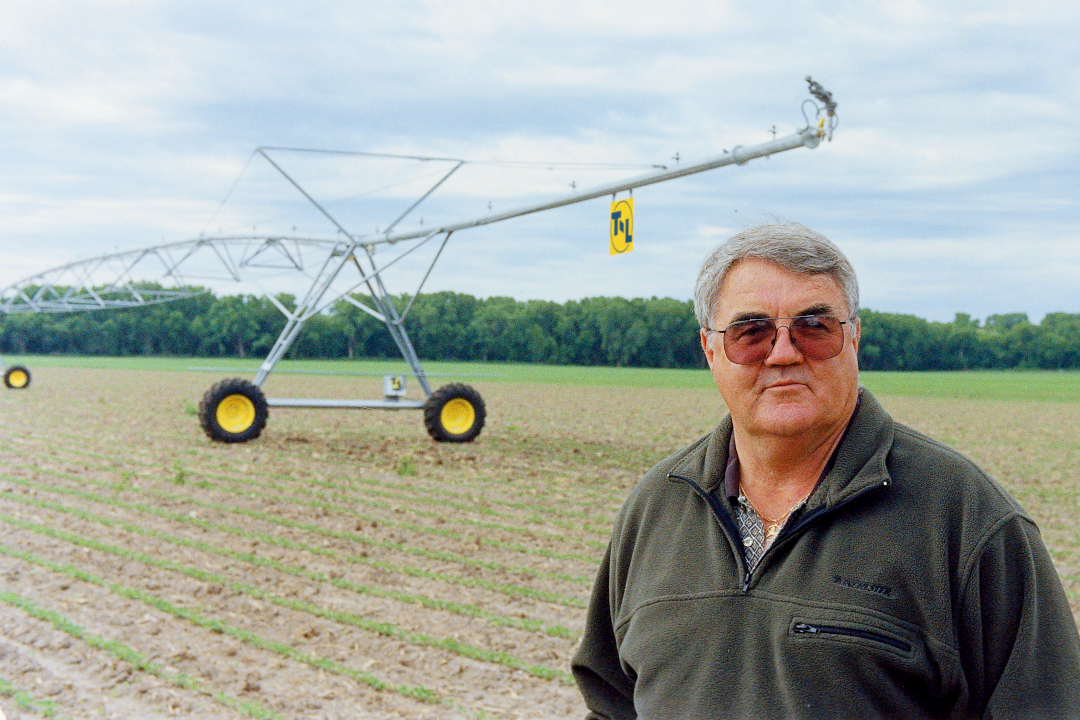