Oakdale, California
Back to Testimonials

“We looked at electric units, but we just felt like the continuous movement of the hydraulic drive would work a lot better in this situation.”

While it’s renowned nationwide for its bounty of fruits and vegetables, California is also recognized as the nation’s largest milk producer … having surpassed Wisconsin as the leading dairy state in 1993. However, California is also known as a rather rain-deprived state.

In fact, near Oakdale, California, where Bill, Jack and Kurt Hoekstra operate Hoekstra Dairy, the average annual rainfall is only 13.3 inches. Yet, that hasn’t deterred the Hoekstras from expanding the milking herd to around 1,350 cows. Instead of spending more money to buy feed, like most California dairymen are forced to do, they’ve invested in T-L center pivot irrigation systems and started growing some of their own rations in the foothills about five miles to the east. ”

We still have to buy a few commodities like canola, rolled corn and alfalfa,” says Joost Bulk, farm manager for Hoekstra Dairy. “But we do grow all our own corn silage and wheat silage, even though the farming side of the business is still somewhat new to us. I think the first pivot went up in 2005, followed by a second one in 2006,” he adds, noting that he joined the operation in 2009.

According to Bulk, three more pivots, which were added in 2009, brought the irrigated portion of the farm up to 410 acres — with 345 acres under center pivot units. The remaining acres are still watered with furrow irrigation.

“All total, we have five T-L pivots, with just two of them making a full circle,” Bulk relates. “All of them are on what I would call pretty rolling ground,” he adds, noting that the pivots have opened a whole new door for corn production. “In fact, one of them, which covers 105 acres, is on a very steep area that had never been used for anything but pasture.

“One of the guys from T-L back in Nebraska was out here and said it was some of the most aggressive ground he’d ever seen,” he adds. “You can stand in some parts of the field and not see the whole pivot because part of it’s over a hill or down in the bottom.

”While Bulk admits the continuous motion of T-L’s hydraulic drive helps tremendously when it comes to climbing slopes, he and his co-workers provide a little help of their own by filling the pivot tracks each spring with wood chips from neighboring orchards.

“We plant everything no-till, but we still usually have a rut where each wheel runs,” he says. “By putting wood chips in the ruts, we’re able to reduce erosion and provide the wheels with a mat to run on for more traction. Without the wood chips, I’ve actually seen the tires spin out on some of our slopes.”

Bulk notes that their program of double-cropping all of the fields under pivots also keeps a cover crop or stubble on the soil year around. Since all the corn is harvested as silage, they’re able to plant wheat in late October and get another crop before replanting the field to corn around June the following year.

Jack Hoekstra, who owns the operation with his dad and brother, admits, too, that the first pivot they installed was on their worst field. Hence, their concern about erosion control.

“That’s also part of the reason we went with T-L,” he admits. “We looked at electric units, but we just felt like the continuous movement of the hydraulic drive would work a lot better in this situation. We also liked the simplicity of the hydraulic drive and the fact that Joost or anybody else familiar with hydraulics can work on them. Plus, I’ve known the T-L dealer most of my life and knew I could trust what he had to say.

“Later on, we found other things we liked about the T-L units,” he adds. “We apply most of our fertilizer, as well as soluble gypsum, through the pivot. Since we spoon-feed nitrogen five or six times during the growing season, it’s important that we don’t get any spoking. Consequently, I think the fertilization with our T-L pivots is a lot more even and uniform.”

Hoekstra Dairy hasn’t stopped with just five pivots, though. The family has already bought a sixth T-L that will cover approximately 65 acres, once it’s installed. And Jack says they’ll be looking at more units as opportunities arise.

Now, the only question, Joost Bulk explains, is deciding whether to put more corn silage under the newest unit or to plant it to alfalfa to eliminate that cost. 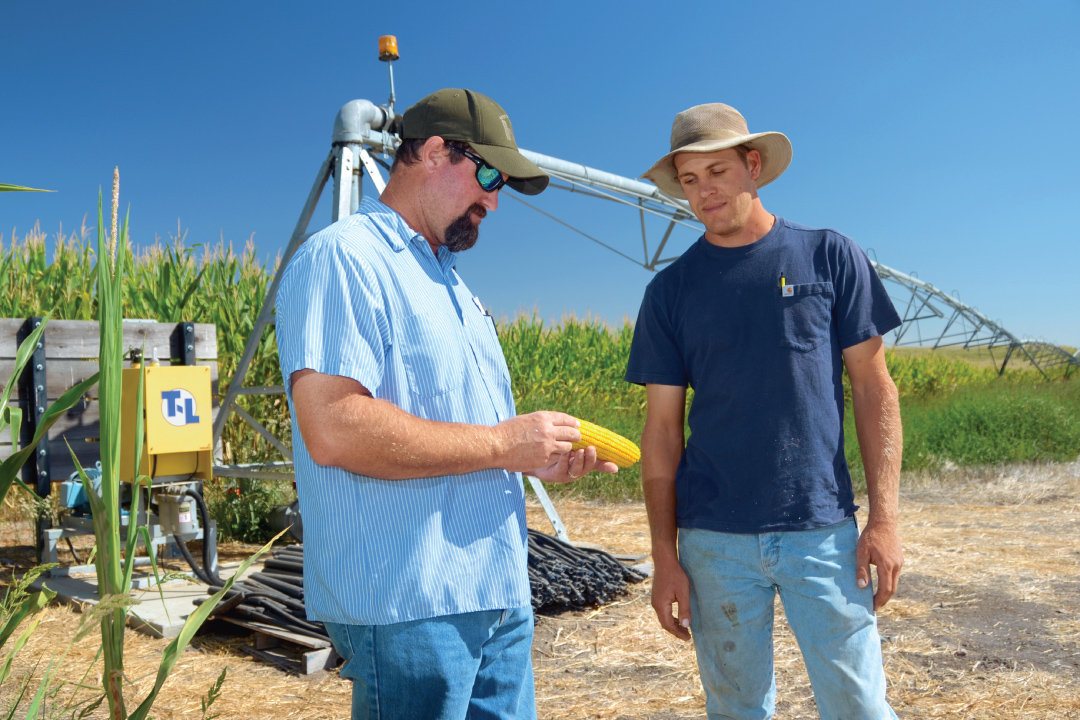