Tabernacle, New Jersey
Back to Testimonials

For nearly 70 years, shoppers have been stopping at Russo’s Fruit and Vegetable Farm in Tabernacle, New Jersey, to pick up some of the store’s famous apple cider donuts that are made fresh each day. However, hundreds of people also shop the market each day for bedding plants, garden supplies, hanging baskets and flowers … not to mention the fruits and vegetables. The latter include everything from pumpkins, apples and peaches to sweet corn, cabbage, tomatoes and string beans. Part of the appeal to local consumers is the fact that the majority of the produce sold through the store is grown on the Russo’s own farm.

According to Anthony Russo IV, the farm, which was founded in 1940 by his grandfather, Anthony Russo Jr., has grown from 86 acres to its present size of around 750 acres. During that time, the operation was passed to the next generation, which was Anthony “Tony” Russo III. Unfortunately, Tony unexpectedly passed away at the age of 74, leaving Anthony IV to manage the operation.

“Farming has not only been our livelihood for all these years, it has been our passion for three generations,” says Russo. “We basically grow everything from A to Z, including the majority of fruits and vegetables we market.”

The diverse operation has also grown to include two acres of greenhouses and two retail locations — the original market in Tabernacle and the Trenton Farmers Market in Trenton, New Jersey. Plus, the Russo family grows and markets both sweet corn and wheat straw through various wholesale buyers. In fact, sweet corn alone accounts for an average of 400 acres annually. Long-straw wheat, on the other hand, is planted as a cover crop to protect the soil during the off-season and harvested as straw bales. While part of the bales are sold through the stores as mulch and for use in Halloween displays, much of it is sold commercially.

“We probably put at least 10,000 straw bales each year,” Russo explains. “It’s kind of like a bonus crop before we plant it to vegetables or sweet corn.

Naturally, most vegetables, and sweet corn in particular, require adequate moisture to produce a dependable supply of produce to meet the demands of the market. That’s what led Anthony and his father to install the first T-L irrigation systems nearly three years ago. Today, they have 10 T-L units, including three more Anthony purchased last year, which cover approximately 450 acres … or more than half of the farm. Among them are four circle pivots and six linear units, including one that crosses a ditch via a bridge for each set of wheels.

“Virtually all of our sweet corn is irrigated in some manner,” Russo relates. “Most of it is under the pivots or linears; but we still use a few reel guns on corners and pieces that are too small for a T-L system. On the other hand, we do have one more T-L center pivot on order, which will put us up to eleven units next year.”

Russo notes that even though he doesn’t yet have remote control of the units from his cell phone or computer, he does have most of the pivots and linears equipped with GPS guidance, which provides Russo’s Farms with a unique advantage. In order to have fresh sweet corn available for their customers throughout the season, Russo and his staff plant a certain number of rows each week. As a result, a number of fields will have sweet corn at different stages of growth and maturity. That also means that different parts of the field have a greater or lesser need for water.

“Thanks to the GPS guidance feature, though, we can run a linear unit to a certain point in the field — often to where a new crop is just coming up — and reverse it to water corn that is in the growth stage,” he explains. “We can do the same thing with the pivots. We can irrigate one side of the field where we have sweet corn in which the ears are filling and then reverse it or speed it up on the other side where we have vegetables or sweet corn in a different stage of growth.”

Russo notes that while he appreciates the service from Lee Rain, his T-L dealer in Vineland, New Jersey, he hasn’t had many reasons to call them — other than to order another pivot — thanks to the reliability of the hydraulic drive. He also likes the consistent speed provided by the hydrostatic drive, as opposed to the stop-and-go movement of electric pivots.

“They’ve certainly reduced the amount of labor required to water our crops and vegetables, compared to reel guns and gravity systems,” Russo concludes. “Plus, they don’t waste near as much water and provide much more consistent water application.” 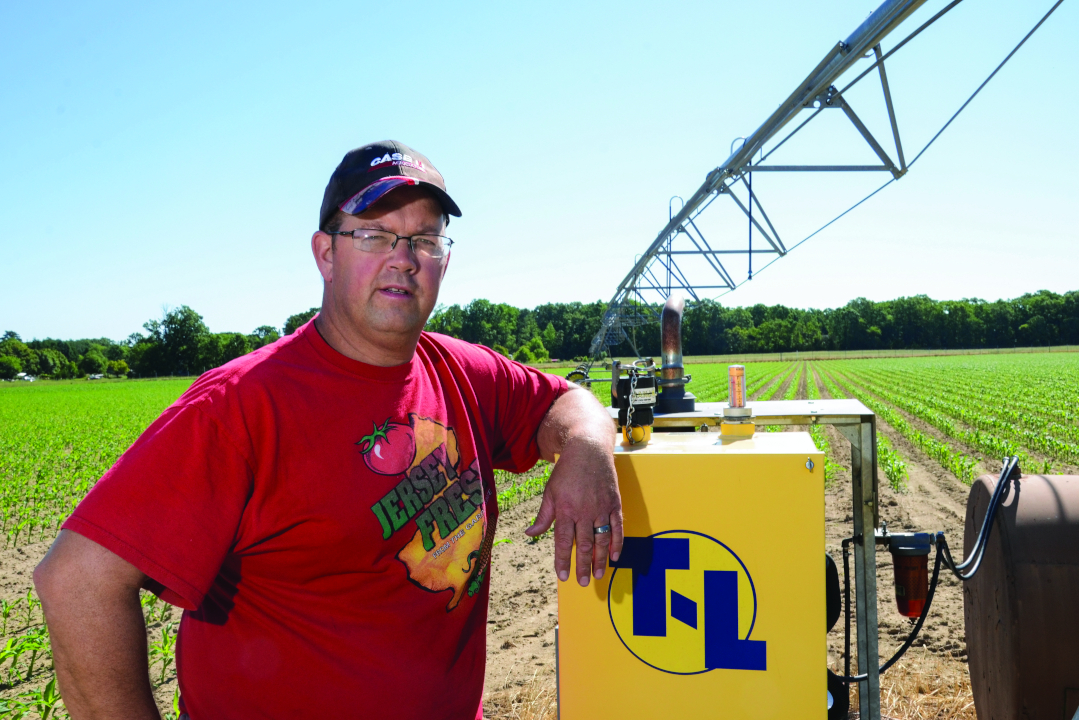