Will El Niño Make An Impact This Winter? 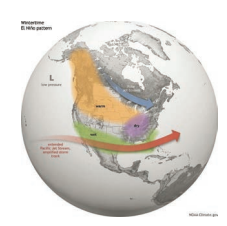 THE big weather story this summer and fall has been the development of an El Niño in the Pacific Ocean. In short, an El Niño refers to the large-scale ocean-atmosphere climate phenomenon linked to warm sea-surface temperatures in the central and eastern Pacific. El Niño is not only the warm sea-surface temperatures, but also the secondary, atmospheric impacts from the abnormally warm waters.

The warm ocean waters enhance convection over the equatorial Pacific, which alters the upper-atmospheric circulation pattern and can have global impacts. This global circulation pattern during an El Niño can be quite complex, but one analogy compares the impact of an El Niño to a construction project in your town. A construction zone can alter the fl ow of traffic, with people being re-routed and side roads getting more traffic. Not every neighborhood will be affected equally, and you may see more traffic at certain times of the day.

This is similar to an El Niño’s impact, where the warm ocean waters alter the upper air circulation pattern; however, the spatial and temporal changes of this pattern are difficult to predict. What impact might an El Niño have in the central U.S.? The Climate Prediction Center (CPC) provides monthly and seasonal outlooks, and forecasters often use typical El Niño patterns to aid in the forecast. The overarching pattern in the winter during an El Niño (see graphic) has above normal temperatures and below-normal precipitation in the Northern states, with below-normal temperatures and above normal precipitation in the Southern states. Nebraska lies in the transition zone between the Northern and Southern states; thus, the long-term predictability using these patterns is low in the middle part of the U.S. Read the full article here