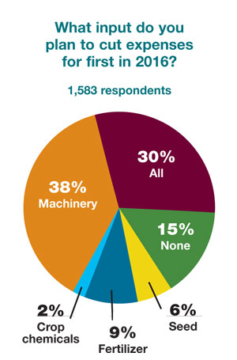 Tight margins for 2016 are pushing farmers to sharpen their pencils and punch their budgets into shape.

“Bankers are going to be looking very closely at [debt to asset] ratios,” says Matt Bennett of Bennett Consulting, based in central Illinois. “We’re going to have to be better businessmen than we’ve been.”
But where will they cut? More than 1,500 farmers told Farm Journal in a recent Pulse poll what input they plan to cut expenses for first in 2016. The No. 1 response with 38% is machinery costs. Another 30% say every input category will be considered for the chopping block.

Bennett encourages younger producers to seek wise council from older generations who survived tough times, such as the 1970s and 1980s.

“We need to understand what it’s going to take to be able to get through what will probably be the toughest time in a lot of our careers,” he says.

In another Pulse poll, farmers were asked about breakeven prices relative to 2015 corn production. The results show a fair amount of skepticism that input costs will see dramatic changes for the 2016 production season.

All told, that could leave farmers with some difficult budget decisions. But Chris Barron, Iowa farmer and Top Producer farm business columnist, says it’s possible to unearth savings by prioritizing the decision-making process.

“Typically, the two areas I see the most opportunity to save are land and equipment,” he says.

There’s no magic bullet for securing lower rent, Barron says. Instead, it takes time and constant transparency about challenges you face with finances and margins.

Determining your cost of production is the first step to pinpoint where to cut input costs. Try free corn and soybean margins calculators at www.agweb.com/tools/calculators.