Abernathy, Texas
Back to Testimonials

"My ten-year-old T-L has had just one gearbox go out. And that happened because a wrong wheel was put on after a flat tire."

A fourth-generation farmer in the area, his exclusive crop is cotton, with milo only as a backup crop. Cotton yields range from 300 pounds per acre dry land to 1,600 pounds per acre under the center pivot irrigation.

Wayne started installing center pivots in 1992. As he ruefully smiles now, “Those were electric drives, with high impact sprinklers and high water pressure. In a good wind I could walk underneath a sprinkler and not get wet. The wind would just blow all the water away.”

As the years passed, McGuire went to low pressure sprinklers, and kept moving the nozzles closer and closer to the soil. Now all of his sprinklers are equipped with hoses or bubble nozzles, which he thinks are the ultimate, “Because, in this country every drop counts.

“They call it semi-arid for a reason and there’s less water every year. Once the crop is knee-high I don’t want to see any water coming out of a sprinkler. There’s really little evaporation with bubblers a gallon of water on the ground will go further than a gallon sprayed into the air.”

Then, in 1998 his first T-L pivot system went in, and his next center pivot was another T-L bought this past spring.

As an indication of current water availability, he has two older systems that need five wells each to provide 350 gpm of flow. The newer T-L’s water comes from four wells and is nozzled for a 450-gallon a minute application.

Wayne considers the most important difference between his electric systems and his hydraulically powered T-Ls is the continuous movement provided by the T-L center pivots. He comments that, “Those T-Ls sure are smooth. I think this makes the water go further.”

“We’re always having gearbox problems with the electric systems since they jerk and stop so much,” McGuire reports.

“As for my T-Ls, they’re smooth, no jerking and shaking. My ten-year-old T-L has had just one gearbox go out. And that happened because a wrong wheel was put on after a flat tire.”

“Cotton under a continuously moving T-L seems to be more uniform,” he continues. “I also think a T-L is more efficient, since it puts out water with more uniformity. Fertilizer that I apply through the system also goes on more evenly.”

“There’s another efficiency the T-Ls have”, he states. His T-Ls neither break down nor do they ever stay in one spot while the fertilizer keeps running as his electric units have done. “Thus,” he says, My T-Ls save additional fertilizer expense and prevent some heavily over fertilized areas.”

McGuire, probably in common with the majority of farmers, says, “Electricity scares me to death. It’s not fun working with electricity when you’re standing in water.”

He has learned to safely fix simple electrical problems, but anything major is a call to an electrician.

As for fixing his T-Ls himself, he notes that, “I guess I could, but I haven’t had anything yet that needed repairs.”

“A T-L will get my money back faster, because it doesn’t break down as much as an electric system,” McGuire continues. “Just look at minimum of moving parts a T-L has.

“When a sprinkler stops in the heat of summer it costs me. So the center pivot that’s running is going to make me a lot more money than the one that’s broken down.”

He also believes his T-Ls are built a little better than the electrics. He’s heard truckers who haul the systems say that the T-Ls weigh more than the other brands they carry.

McGuire’s T-L dealer worked with him to customize the installation of his newest system. He positioned all the outlets so the hoses with bubbler nozzles would drop exactly in every in every other furrow planted.

Wayne also planted his rows in circles. This prevents towers from either skipping or running over rows and allows McGuire to fully utilize his precision farming equipment. For example, he can apply fertilizer in next to the plant, under it or sidedress precisely three or four inches away, his choice.

“Maintenance-free, efficient, easy to use, and built any way you want,” he sums up. “That’s why when anyone asks me about center pivots I tell them, ‘You’ll be happier with a T-L, especially in the long run’.

Using wheat as cover crop for cotton McGuire considers one of his best crop management strategies applied in recent years was planting wheat-strictly to aid his cotton and not to be harvested. The problem is the sandy soil that a strong wind can easily whip into small particles that shred the fragile cotton seedlings. Hail or even a hard rain can also seriously damage the young cotton. To prevent much of this damage, McGuire seeds wheat, then applies herbicide to kill the wheat in April. Three or four weeks later he plants his cotton into the cover crop.

The result: The wheat stalks protect the cotton plants, giving them a good, stress-free start toward good yields-200 to 400 pounds or more an acre! 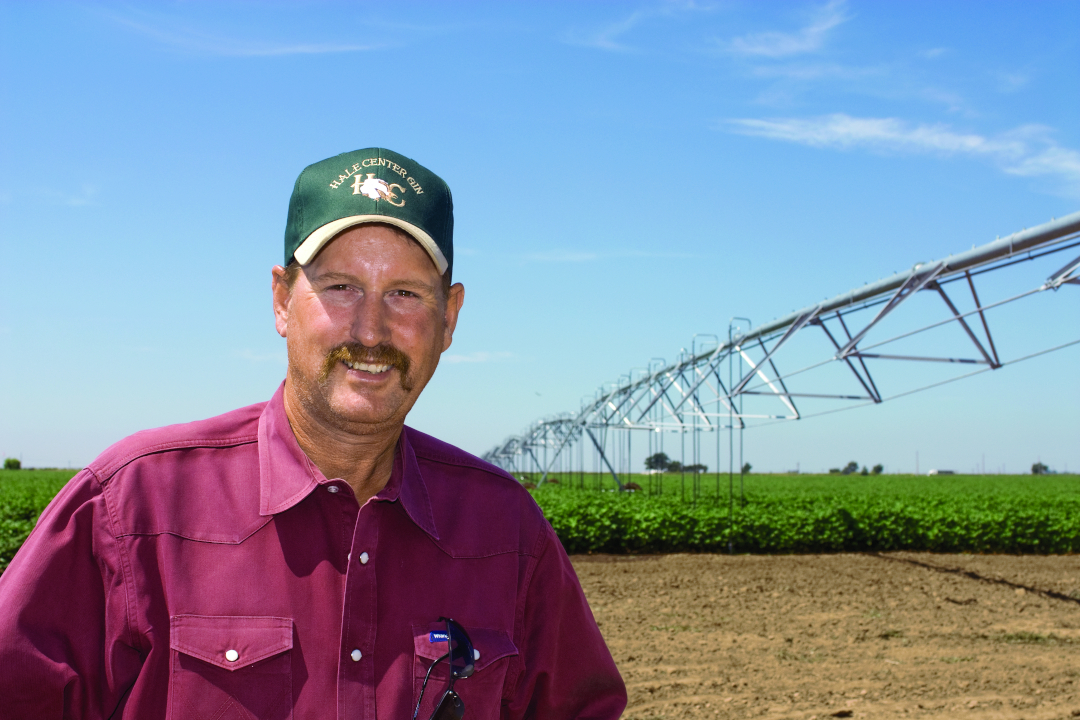