Dodge, Nebraska
Back to Testimonials

"This Nebraska farm family has been buying and using T-L units for three generations."

With nearly 1,100 acres of corn and soybeans under T-L Irrigation pivots, Wayne Beck and his son, Curtis, are surely among T-L Irrigation’s best customers. That’s especially true when you consider Wayne has a history with T-L that goes back to 1956, when his dad drilled his first well and started using hand-moved 40-foot T-L aluminum pipe with sprinkler heads.

The irony is that the quarter- mile-long T-L tow lines the family bought in the early 1960s to replace the hand lines were the last T-L products the Becks ever purchased new. Even though they now own 13 T-L center pivots, all those units were purchased used and refurbished by Wayne and his dad, Harold, or, later, by Wayne and Curtis.

“The pull lines were so much easier to move than the hand move lines we used when I was a kid,” says Wayne. “Of course, the first center pivot units were even easier than the pull lines,” he adds, noting that they purchased their first pivot in 1977. “The move from hand lines to tow lines and, finally, center pivots also let us go from 38- and 40-inch rows to 30-inch rows.”

“Our first T-L pivot was a used 13-tower, chain-drive unit that I saw advertised in the Omaha newspaper,” Wayne recalls. “It was a 1973 model that came from what used to be Traudt Irrigation in Sutton, Nebraska (now Sutton Irrigation), and it had been used on a 160-acre field near Giltner.”

“Ernie has been gone several years now, but I still owe a lot of credit to Ernie Traudt for getting us started,” he insists. “He asked us how we planned to use the pivot and we told him we wanted to make two 40- acre pivots out of it. His answer was, ‘Well, I’ve got a pivot point and hydraulic pump you can use for that second one.’ So that’s how Dad and I got started with T-L center pivots.”

With the experience they gained from that first one, Beck says he and his dad, who has since passed, began buying, moving and building even more T-L units. In fact, he says that it got to the point they could dismantle a 10-tower T-L unit to the point it could be transported in as little as three days.

“For a couple years there, Dad and I were bringing home two pivots each winter,” Wayne continues. “Most of those were still chain-drive units that farmers had traded in for the new planetary drive machines. Of course, we understood hydraulics and even chain-drive machines were an improvement on what we had.”

Today, Wayne and Curtis continue to buy and refurbish used T-L pivots. While a few newer planetary drive machines have been used to replace old chain-drive units, the majority have been installed on land they’ve added over the years. One year, they even went so far as to turn a 13-tower unit into an 18-tower model, using parts they had on hand from other used models.

“We still have three old T-L units that are chain driven,” says Curtis. “However, the rest have either been converted to planetary drive models or replaced altogether. To convert the chain-drive units, we have to cut off some of the old drive system, then weld on new brackets for the planetary drive pumps and add the tubing,” he adds. “But we’ve been able to convert several of them without too many problems.”

Beck says the most recent purchase was a T-L pivot that was installed on 200 acres that the family purchased in 2007. As a result, every acre that the family farms, except for the corners, is now under pivot irrigation, providing corn yields that have continually averaged over 200 bushels per acre.

“With the planetary drives and worm drives that T-L puts on the new units, about all you have to do is go out there and check the grease in the gearboxes and check the air in the tires,” Wayne says. “I have replaced the seals and rebuilt the planetary drives in a few units,” he adds. “But even that has been minor, compared to the amount of work electric units require. It’s not that I don’t know how to work with electricity, because we’re all electric on our wells. But I’d much prefer working with hydraulics and having an electric circuit that I can test with something as simple as a light bulb if necessary.”

Beck says he also prefers the continuous movement of T-L pivots and the lack of micro- switches that can go bad after a few years.

“You don’t have any of that ‘herky, jerky’ movement as it moves through the field,” he grins. “And I think you have to consider the torque it requires to re-start every time it stops on some of these hills.”

“I know there are guys who prefer electric pivots who will say, ‘Well, at least I don’t get my hands dirty working on the pivot’,” he concludes. “I guess my answer would be, ‘I don’t profess to wear a white shirt when I’m working on equipment’. The important thing is T-L pivots are just plain reliable. And even when they do need some work, they’re easier to repair and they’re simple to operate.” 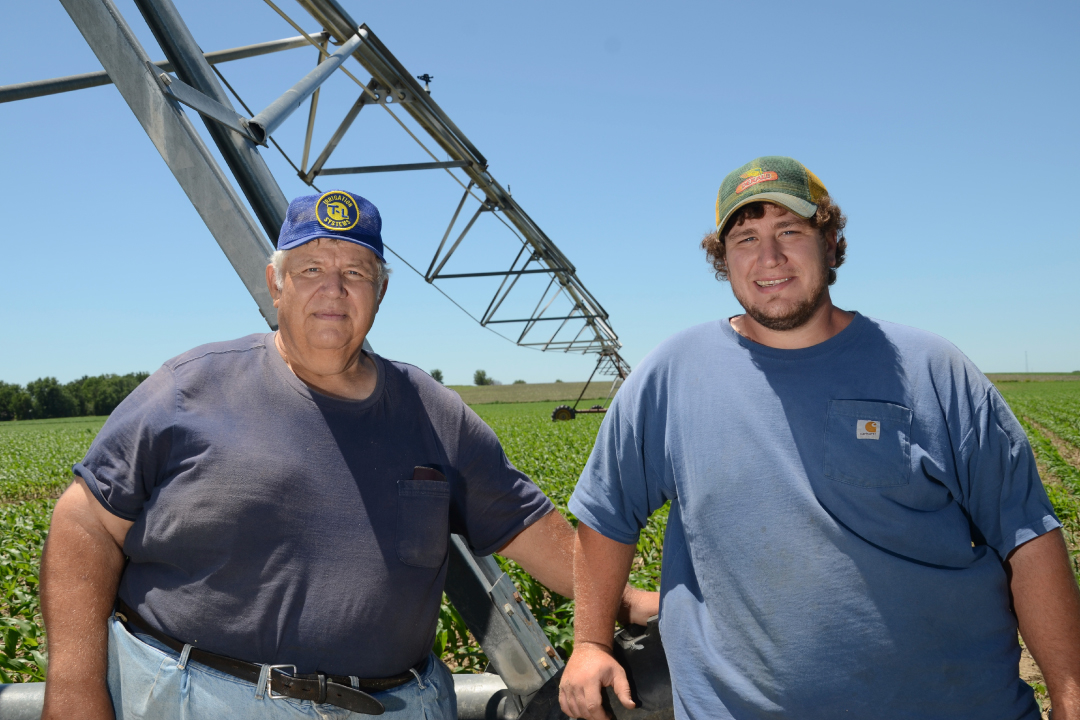