Pontotoc County, Mississippi
Back to Testimonials

"First of all, T-L pivots are simple to operate and user friendly. The control panel is so easy to understand that any of my employees can set it for the desired application and get it going."

Neither Tommy Harrison nor Micke Bowen, close friends since boyhood, had to think too long to figure out how they would earn their livings. Micke’s dad, a farmer and gin owner, passed away when his son was just a teenager, and the youngster had no choice but to fill his late father’s shoes and keep the family business going. Early on, he developed the skill of making sound business decisions, and as his friend Tommy says, “Micke has never looked back.”

In 1973, when Tommy was just a ninth grader, his dad, a third generation farmer in Pontotoc County, Mississippi, located in the northeast corner of the state, gave him a one and a half acre cotton patch and told him that he would be responsible for planting it, tending it during the growing season, harvesting it, and selling it.

The market was dismal that year, languishing in the 20 to 30 cent range, and when it reached 33 cents, his dad, certain there was little likelihood the price would go higher, booked his cotton crop. Tommy took a chance and held out for a higher price.

Indeed, the price did take a dramatic upswing. “I booked my cotton at 70 cents,” Tommy says, “and ended up with $1100 in the bank. I couldn’t believe how rich I was. Dad worried that I might do what most youngsters would do and spend the money unwisely, so he warned me that there would be no ‘furnish’ for next year’s crop out of his pocket. From the ninth grade on, he never gave me a cent. That was an extremely valuable lesson that has served me well ever since. Then, when I was 17 years old, I went to the bank, borrowed enough money to buy 86 acres and one tractor, and began my farming career. I’ve never wanted to do anything else.”

These two lifelong friends became partners 20 years ago and are now co- owners of BHF and Company headquartered about 10 miles south of Pontotoc, Mississippi. They are steadily expanding their company by using the ability they learned as boys and have constantly improved over the years — the ability to make sound business decisions.

Today, their combined farmland totals about 4,000 acres, planted annually to cotton, corn, and soybeans. BHF also owns and operates an agricultural flying service and an earth moving/excavating/land-forming operation. The latter serves residential, commercial and agricultural needs over a wide area of north Mississippi.

Tommy and Micke farm in an area that historically receives about 55 inches of rainfall per year, more than enough for the crops they grow to produce profitable yields. But, as is the case in most farming regions, the two men have learned that the years when rainfall is sufficient and comes at optimal times during the growing season are few and far between. And, in fact, much of the Southeast is now struggling with the worst rainfall deficit on record.

“The year 2006 was one of the worst dry years we’ve ever experienced in this area, so Micke and I began giving serious thought to irrigating what land we could, either with center pivots or by land forming” Tommy says. “There is virtually no irrigation in this area, mainly because the land is rolling, and fields, mostly in the bottoms where the soil is richer and better suited for farming, are generally small — averaging around 20 acres in size. Between us, we have about 175 fields, and adequate subterranean water for irrigating is about 1700 feet beneath the surface.”

Good businessmen turn problems into opportunities, and that is exactly what Harrison and Bowen did. Obviously, pumping water from 1700 feet below the surface was not feasible, even if they could get the required permits, so they looked elsewhere for water to supply irrigation.

After extensive study of topographical maps, they determined where creeks and prominent watersheds were, and used their own earth-moving equipment to build dams that would connect hills, thus enclosing lakes to serve as reservoirs.

By removing a few trees to combine several small fields, and building an 18-acre lake that averages 9 feet in depth, Harrison realized that he could use a center pivot to water about 130 acres.

“Even though center pivot irrigation is almost non-existent in this area, after the terrible drought of 2006 I was determined to do whatever I could, within reason, to insure that I could water my crops when Mother Nature wouldn’t,” Harrison said. “So, I decided to invest in my first center pivot.”

Harrison admits that he is not much of an electrician and, as he says, “I don’t want to do much more than put batteries in a flashlight.” Therefore, he had misgivings from the get-go about electrically operated pivot systems.

But, like most farmers, he is quite familiar with hydraulics. When someone mentioned that center pivots manufactured by the T-L Irrigation Company are hydraulically operated and not dependent on electricity, he decided to purchase a quarter-mile system to water the 130-acre field with a power unit pumping from the lake to the pivot via an eight-inch pipe underground about four feet.

In 2007, Harrison grew his best corn crop ever, harvesting an average 170 bushels per acre, including the acreage covered by the T-L center pivot.

“I knew right away that I’d made a sound business decision when I invested in the T-L System,” he says. “First of all, T-L pivots are simple to operate and user friendly. The control panel is so easy to understand that any of my employees can set it for the desired application and get it going. And, more importantly, because it is not powered by electricity, I don’t worry about the possibility of a serious accident. Also, I’ve noticed that the pivot is designed to remain aligned throughout a rotation and its continuous movement provides the same amount of water all the way around, no over- or under-watering some areas.”

In 2007, Harrison’s corn crop benefited from timely rains, and the pivot made only 4.5 circles, but, as he says, it ran virtually trouble free. T-L technicians resolved one minor problem quickly, resulting in only a few hours’ downtime.

“Micke and I have decided to steadily expand our irrigation capability,” Tommy says, “and hope to be able to water about 600 acres next year. Wherever possible, we will install T-L center pivots. These systems are durable, dependable, and efficient. I would definitely recommend the T-L center pivot irrigation system to other producers. For Micke and me, investing in T-L was a sound business decision.” 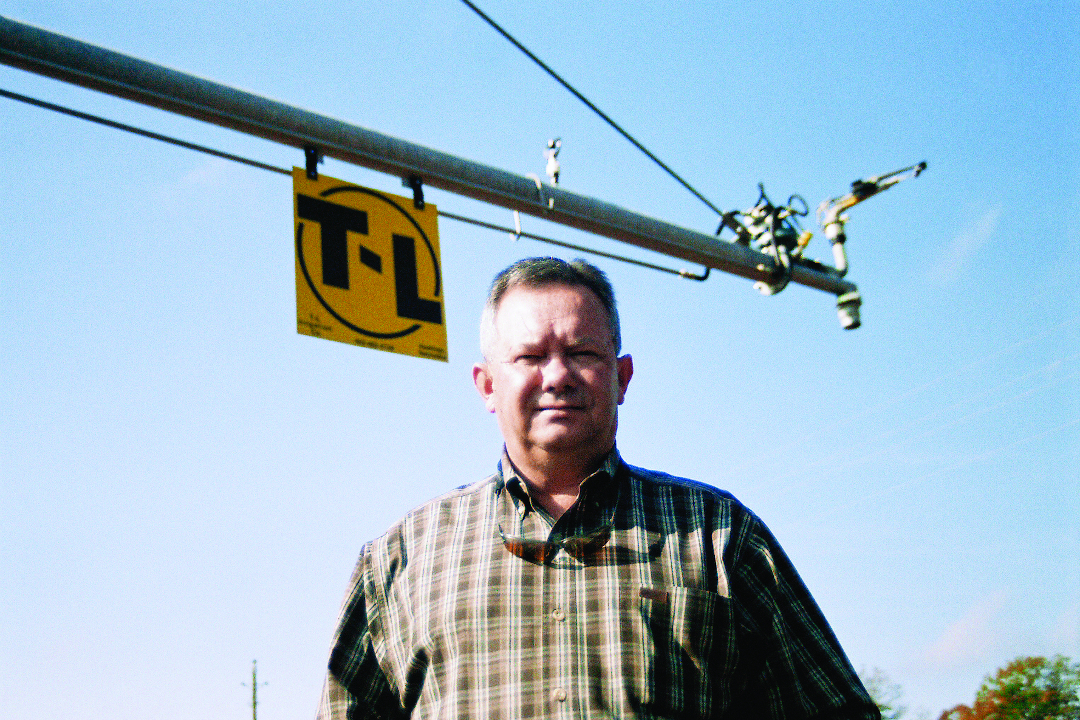