Pantego, North Carolina
Back to Testimonials

"T-Ls certainly run a lot smoother, which is the thing we like most about the T-L units. We feel like they should be a lot safer, too, since there's no high voltage out on the pivots."

Center pivot irrigation is still relatively new to Maurice and C.E., Jr. (Buster) Manning, who operate Manning Farms with their sons, Neal, Trey and Zack, near Pantego, North Carolina. In fact, the three T-L pivots the family installed this past spring are not only the first to be used on the farm, but they’re also the first to be installed in the area. However, the Mannings are already looking at corn yield increases of 60 to 100 bushels this fall on their irrigated fields.

“We’re only about 80 miles from the outer banks, so we get around 52 to 55 inches of moisture a year,” Maurice admits. “But it can get pretty dry at times between May and the end of July. Of course, that’s when moisture is most critical.”

Although the center pivots only cover 360 acres on the 3,900-acre farm that produces corn, soybeans and wheat, the new T-L units are located in fields with soils that don’t typically hold soil moisture very well. One of the pivots, Maurice explains, covers 110 acres; another covers a 180-acre circle, and the third covers a half circle of 70 acres.

“A hundred years ago, most of our farm was considered swamp land until it was cleared in the early to mid-1900s,” says Maurice, noting that his grandfather first started farming the area in 1955. “As a result, most of our soils are fairly high in organic matter content. The fields where we put the center pivots, though, are made up of fractured clay subsoil with only about five percent organic matter. So it tends to dry out rather quickly.”

Manning says they did have irrigation on one 110-acre field prior to installation of the T-L systems, but it was a subsoil system that consisted of ditches that were flooded, allowing water to seep into the surrounding areas.

“We’re certainly getting better water control with the center pivots,” C. E. adds. “Plus, we’re only using about half as much water.”

Selecting the right system for their operation wasn’t an easy decision, though, as Maurice relates. “We probably researched center pivot systems for three years before we made a purchase,” he explains. “The center pivots that are relatively close to us are predominantly electrics,” he adds, noting that even those are nearly 30 miles away. “But we just liked the idea of the hydraulic drive. We never cared for the way the electrics started and stopped all the time. It looked like there was a lot of potential there for wear that way.”

“T-Ls certainly run a lot smoother, which is the thing we like most about the T-L units,” C. E. adds. “We feel like they should be a lot safer, too, since there’s no high voltage out on the pivots.”

The Mannings believe the installation of the pivots was particularly timely, considering this year’s weather.

“Our better fields will average over 150 bushels of corn per acre,” says Maurice. “And the whole-farm-average is around 138 bushels, which is pretty typical for this area.”

“The way we had it figured, we could probably gain around 60 bushels per acre with the pivots,” C. E. adds. “But we had some pretty hot, dry weather in June this year. And from looking at the fields, we’re thinking that yield difference will be closer to 100 bushels when you compare what we’re seeing on the ears to what those fields would have made without irrigation.”

Consequently, the Mannings are already looking at adding a T-L linear system on a long, narrow field.

“We’re also planning to experiment with continuous corn-on-corn under two of the pivots,” Maurice concludes. “The other one will be a wheat-double-crop soybeans and corn rotation, like we use on most of our other fields.”

The difference is that there are now 360 acres that are no longer at the mercy of North Carolina’s coastal weather. 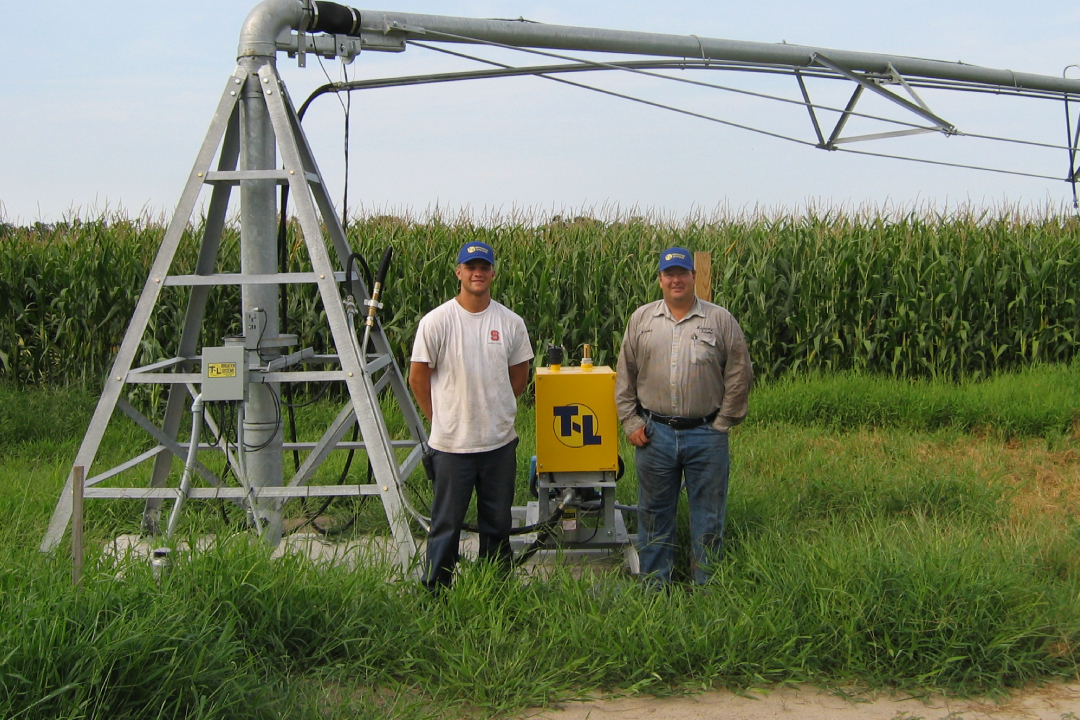