Glendale, Kentucky
Back to Testimonials

Given the differences between T-L hydraulic drive pivots and those built by the company’s three major competitors, most pivot irrigation customers can be divided into two groups — those who own electric drive units and those who own T-L models. However, Steve Rogers, who farms around 2,000 acres of corn, wheat and soybeans with his sons, Phillip and Adam, near Glendale, Kentucky, took things to a new level when he recently converted two older electric pivots to hydraulic-drive units.

Like a growing number of eastern cornbelt producers, Rogers has discovered the benefits of having irrigation available when the 40 to 50 inches of average annual rainfall fails to arrive at the appropriate time. In fact, he was the first producer in his area to install a center pivot unit and remained the only one with pivots for several years.

However, when two electric models were in dire need of replacement or repair, Rogers took the unusual step of rebuilding them with T-L hydraulic parts and components acquired from R & K Pivots, his local T-L dealer.

“I had already replaced an older electric pivot — which was the first pivot I installed — with a new T-L pivot in 2012.”

“The other two units were electric drives, which covered about 45 acres each,” he continues. “The pipes were in good shape, but I was just getting tired of dealing with all the electrical problems out on the pivots. Something would “Let’s Try Doing It The New Way.” happen and it would shut down; but before I could try and figure it out, it would somehow fix itself and start working again. Plus, the gearboxes were getting to the point that they really needed to be replaced. So I finally decided I’d just see if I could convert them to hydraulic drive.”

For Rogers, who is a natural mechanic in his own right, it meant installing a new center pivot base tower, new hydraulic tubing and valves and new T-L hydraulic-drive gearboxes on each tower. While the conversions cost him several thousand dollars each, Rogers says each conversion was still less than the cost of a new pivot.

“My main incentive was that I was wanting to get rid of all the electrical problems related to electric drive without having to replace everything out there,” he insists, noting that he did the conversions over this past winter. “I can still remember the time we had a gearbox on an electric pivot go out one afternoon when it was about 103 degrees outside. My two sons and I were out there replacing it and it was ‘none too cool’ in the middle of that corn. By the time we got out of there, we didn’t have a dry stitch of clothing on us.”

The only drawback is the fact that Rogers only has three pivots that cover 180 total. And each of those is located near a river, where there’s a year-around source of water.

“Irrigation certainly makes a difference, especially on corn,” he relates. “We see an average increase of about 15 bushels per acre on soybeans under irrigation, but there’s an even more significant difference on corn. Our long-term average on dryland corn is about 160 bushels, whereas corn under the pivots runs between 240 and 250 bushels … for an average difference of around 80 bushels per acre.”

In 2012, when much of the Midwest was experiencing a drought, the variance was even more dramatic. While irrigated corn maintained its average of 240 bushels per acre, Rogers’ dryland corn came in at just 25 to 40 bushels per acre.

“Although we’re in an area with 40 plus inches of rain a year, it seems like it’s either feast or famine,” Rogers says. “July is normally one of our wettest months, but I’ve seen it when it’s dry as a bone, too.”

“Even in the months when you do get the average, you may get all of it in one or two rainfalls, which means that most of it goes to the river. We’re just trying to put some of it back on the field. As a result, the pivots have made money for us every year but two, which were summers when we got plenty of rain. One year we broke even and the other, we probably lost a little money, due to the amount of time we did run the pumps.”

While he doesn’t have any more electric pivots to convert, Rogers says he does anticipate adding more hydraulic drive units in the next few years.

“I anticipate adding two or three more,” he says. “Of course, they’ll all be T-L units. I look for at least two of them to cover about 90 acres each, although one will be a full circle and the other a half circle.”

“I had looked at the T-L hydraulic drive system before we bought the electric systems,” he admits. “Looking back, though, I’m not sure we were ever happy with the route we took. I think we would have been better off if we would have had T-L pivots all along.” 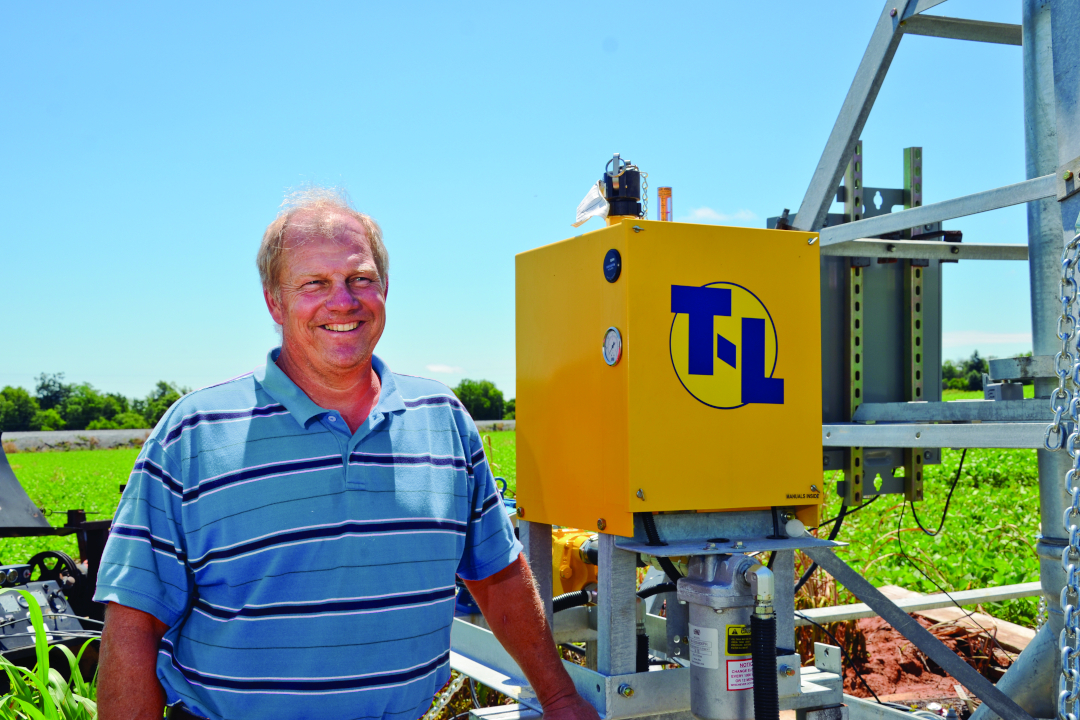