Beaver, Oklahoma
Back to Testimonials

"Best of all, the T-L pivots require a lot less labor than either the side-roll systems or the electric units, and at my age, I'm all for anything that takes less labor."

This Oklahoma rancher insists that one way or another, his only electric center pivot unit is leaving!

Steve Parker doesn’t have much use for the electric center pivot irrigation system he bought several years ago. And he means that both literally and figuratively.

“It’s been at least 15 years since I’ve even used it,” says Parker, who has since installed two T-L center pivot units on the cattle and wheat operation he owns south of Beaver, Oklahoma. “Yet, every month, until I told them to just come out and remove the meter, I was having to pay a meter service charge.

“I think I’ve finally got it sold,” he relates. “But I’ll cut it up and build cattle pens out of the pipe if I have to. One way or the other, it’s leaving. I’ve had nothing but trouble with that one since the day I bought it.”

Irrigation is nothing new to Parker, however. For as long as he can remember, Parker has been moving irrigation pipe and dealing with temperamental systems. In fact, he says his father and grandfather drilled the first well in 1962 and began furrow irrigating corn and sorghum for silage. Even today, Parker says he still does some furrow irrigation in combination with a few side-roll lateral systems.

“I liked the idea of no electricity, because I understand hydraulics a whole lot better than I do 480-volt electricity.”

“Fortunately, I’ve since got acquainted with my dealer for T-L,” he adds. “I liked the idea of no electricity, because I understand hydraulics a whole lot better than I do 480-volt electricity.”

Although a lot of things have changed since Parker put in the first of his two T-L units — without any electricity needed at the control box — he says he still holds a preference for T-L pivots. Originally, he says, they were installed to help irrigate wheat, alfalfa and forage grown for a family owned dairy that once numbered up to 140 cows. Today, the dairy is gone, and so is the alfalfa.

However, cattle are still the focus on Parker’s ranch. It’s just that the herd that averages around 175 in number now consists of beef cattle.

“Wheat is the only cash crop I grow,” Parker says, relating that around 350 acres total are under some type of irrigation. “Otherwise, it’s all cattle related.”

In addition to the cow/calf herd that he maintains year around, Parker says he and his son, who works at the sale barn in Beaver, often buy what they call “put together cows”.

“Those are the old cull cows that come through the ring one or two at a time,” he explains. “We try to buy them pregnant so we can get at least one more calf off of them while speculating on the cows themselves.”

Unfortunately, Parker is still responding to one of the worst droughts in history. Just this past summer, he was forced to sell off more than 40 head of cows, bringing his herd down to around 115 animals.

Still, he insists it would have been worse had he not had a crop of cool-season grass under one of his T-L pivots. In addition, Parker is not one to over-graze a pasture of any kind. That includes the winter wheat he used for pasture this past winter.

“I’d open the gate and leave them on the wheat for four or five hours at a time and drive them off,” he says, noting that he also has about 120 acres of dryland wheat. “I can still remember when I was in grade school and not being able to see more than a few hundred yards because of blowing dust; and I don’t intend to let it happen again. Besides, if you manage it right, you can graze the wheat during the winter and still get a decent wheat crop. Of course, that wasn’t the case this year, with the drought. We were lucky to get any wheat at all.”

Of course, that’s another reason he has dreams of adding at least one or two more T-L units as replacements for the side-roll machines.

“Those lateral-move units are so inefficient they can barely pull their own weight when they’re filled with water,” he says. “In comparison the T-Ls not only save water, but they do a better job of putting it on than our electric pivot ever did. Because of the hydraulic drive, the motion is always steady, whereas the electric units continuously stop and start.

“Best of all, the T-L pivots require a lot less labor than either the side-roll systems or the electric units,” he concludes. “And at my age, I’m all for anything that takes less labor.” 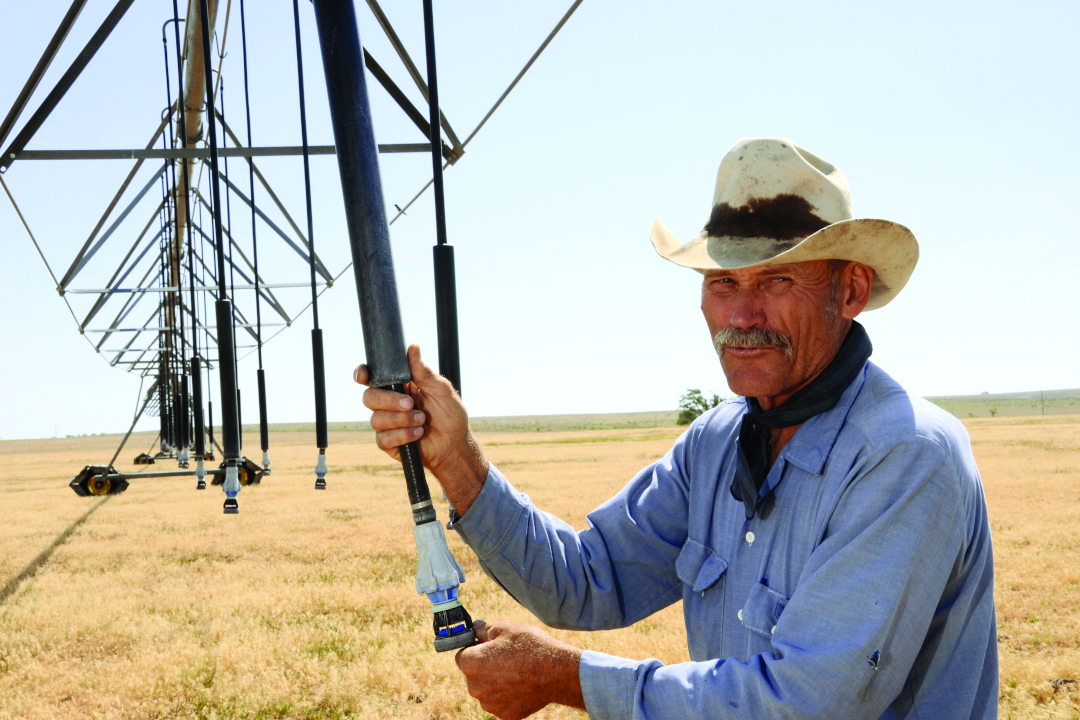