Peru, Indiana
Back to Testimonials

"My T-L system has been trouble free and worry free. That's worth an awful lot. It's difficult to put a price on not having all that additional stress."

“I wanted to do something different, get away from government programs, and have just a little more of a challenge,” Steve Hileman in Peru, Indiana, explains why he’s been raising specialty crops since 1988.

And, as he admits, he’s achieved all three goals, with sometimes almost a little too much of the last, though. Popcorn has been his main specialty crop over the years. A good average yield has been running 4,000 pounds an acre.

This past year he grew 1,100 acres of popcorn, plus some soybean rotation acres. The year before he experimented with 150 acres of miniature pumpkins, too.

Hileman’s reason for continuing to produce specialty crops is his bottom line: “I can usually net a little more money with specialty crops, not a big amount, but enough more to justify the effort.”

The summer of 2001 was an exceptionally dry season, which made his center pivot irrigation applications a critical factor in getting both the yields and quality that he needed. As he ruefully recalls, “I can’t remember ever running my irrigation systems so continuously.”

Some years ago he bought some land that came with two electric center pivot irrigation systems as part of the deal. Four years ago it became apparent that it wasn’t worth it for him to continue repairing one of the systems.

“I decided to replace it with a T-L Irrigation center pivot for a number of reasons,” Hileman explains.

“I liked the idea of hydraulic drive, that there were only two gear boxes rather than three per tower, and that weather would affect hydraulics a lot less than the electrical components of an electric system. Plus, the T-L’s constant motion meant to me that it wouldn’t suffer from continually starting and stopping and probably would apply water more evenly.”

Since then the T-L has applied an inch to an inch-and- a-quarter of water at a time in enough revolutions that he estimates 13 million gallons have been run through the system each summer for four years.

And, during those four years Hileman’s outlay for repairs for his T-L has been “zero”. As he says, “I haven’t had to spend a penny on repairs for my T-L system.” His T-L unit has been as maintenance free as it could possibly be, too, he reports, in contrast to its electric predecessor. Basically, there has been only five to ten minutes routinely winterizing each of its seven towers.

“Both of my electric center pivots have been nightmares,” Hileman shrugs. “Not only does the T-L save repair costs, but also time. I can use that time to be doing other things rather than working on an irrigation system.”

“My T-L system has been trouble free and worry free,” he smiles. “That’s worth an awful lot. It’s difficult to put a price on not having all that additional stress. That’s the number one thing to me.”

Hileman likes the continuous movement of his T-L. And, while he doesn’t have any comparison aerial photographs, he believes water coverage is better than with a start-stop center pivot system. This would be even more important, perhaps even critical, if he were applying chemicals through the irrigation water, he says.

He’s also appreciative of the T-L’s tall, narrow tires. Hileman says they put as much rubber to the ground as a wide tire. But, since they run in a narrower track the wheels do less damage to crops.

“Even if it gets a little wet and the tires sink in some, I can still cross the track with a combine and not feel it,” he adds. “A wider tire makes tracks that can cause a combine wheel to drop in.”

While he’s not taken the time to total up all his electric bills, Hileman believes that the checks he writes for electricity are a bit lower with the T-L.

“I paid a little more for my T-L sprinkler, although the cost between a T-L and an electric system is really quite competitive,” Hileman sums up. “However, the T-L’s quality goes so much longer that you forget its slightly higher initial cost.” 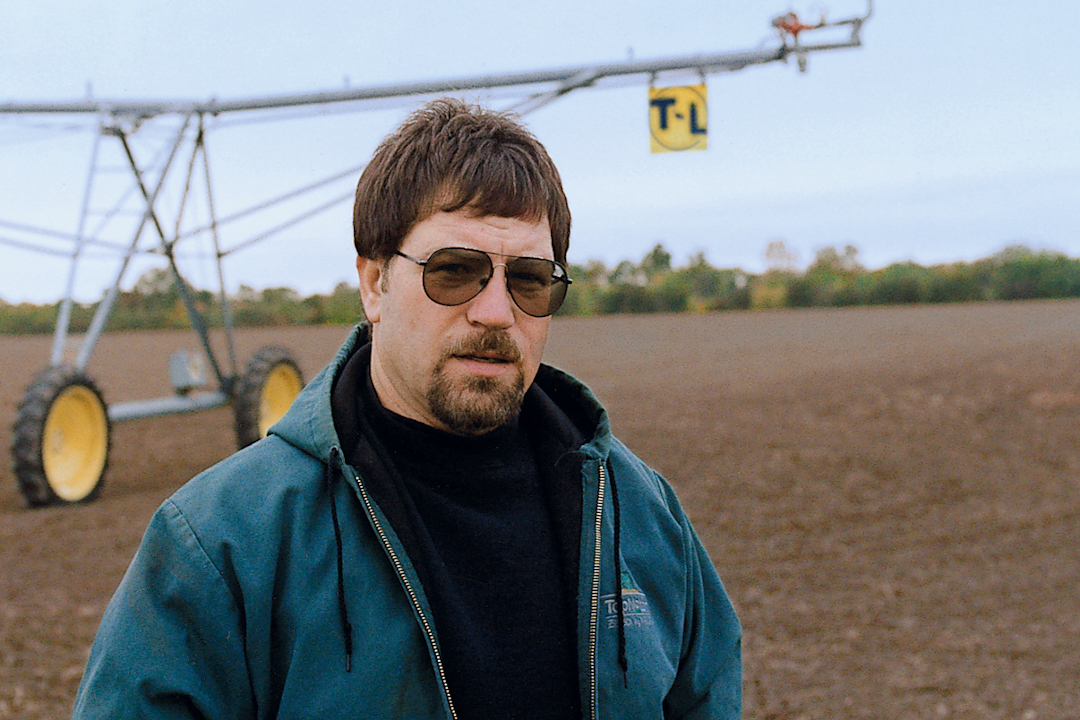