Costa Rica
Back to Testimonials

"With T-L's we don't lose too much water from the wind blowing and so get better application uniformity, also our T-L irrigated fields don't have the erosion that we get under other systems."

“You just throw the switch, and away it goes,” states Steve Hall, 12-year crop consultant to Azucaria El Vicjo, a Costa Rican sugar plantation, when pointing out why six T-L center pivots are at work, some up to 1,600 hours a year. “We have little trouble with them. Our T-Ls just go around and around.”

They’ve been a welcome change compared to the operation’s previous experience with an electric drive linear move system that seemed to be stopped as much as it applied water.

“We aren’t getting much service from the people we bought it from either,” Hall says. “The thing that we were really nervous about was water and electricity–they just don’t mix.”

He commented that just about anyone can solve a problem with hydraulics, which is something that can’t usually be done with an electric unit.

“You don’t have to be a qualified electrician to run T-Ls, Hall added. “All you need is some common sense.”

“With our furrow irrigation one man can handle only seven hectares. (17.5 acres). But, we have just one person taking care of six T-Ls on 420 hectares (1,050 acres). That’s efficiency!

At one point the plantation irrigated 400 hectares (1,000 acres) using underground drip irrigation. However, according to Hall, “It was costing us a small fortune and required extremely high management expertise to be successful.

Even though drip irrigation is frequently considered to be an optimum form of efficient irrigation, the plantation’s real-life results leaned heavily toward T-L center pivot systems.

For example, the drip irrigated land averaged only 58 tons of sugarcane per hectare (23.2 tons an acre). The first T-L installed has averaged 125 tons a hectare (50 tons an acre), for an increase of 116 percent. This resulted in 12.2 tons of sugar per hectare compared to a world average of seven to eight tons, or over 50 percent higher yields. With a world price of $US500 a ton, the T-L superior performance amounts to approximately $US 2,000 more sugar per hectare.

Depending on the field a T-L is in, 1.5 inches of water in six days to 1.75 inches in ten days is applied, as needed. At times the systems water continuously, based on their field observations and irrigation monitoring sensors’ data.

“When I learned on the Internet that T-L utilized hydraulics, I contacted the Company. Then another plantation representative and I visited T-L’s Nebraska manufacturing facility,” Hall says.

“All we’ve done with that first T-L installed five years ago has been to change hydraulic fluid filters, grease the gearboxes and repair one tire’s puncture and rubber valve,” he continues. “That’s the only problem we’ve had with it.”

Another reason supporting the decision to go with T-L’s was the continuous movement of the machine. According to Hall, “There wasn’t all that stopping and starting that could result in wet and dry patches.”

Considering the third sprinkler system used on the plantation, the hose reels, or “cannons”, there’s really little comparison. He observes that they have 300 hectares (750 acres) utilizing this method of irrigation.

“The wind here can be just horrific,” Hall notes. “So, with the hose reels we end up with big dry patches all over the place. With the T-Ls, their continual movement provides consistency.”

“Yes, with T-L’s we don’t lose too much water from the wind blowing and so get better application uniformity,” Jaziel Sanabria, Irrigation Manager, says. “Also our T-L irrigated fields don’t have the erosion that we get under other systems.”

“A T-L is a relatively simple system that lets us keep irrigating without interruption and when it’s needed the most to boost our yields,” he adds. “They also let us use our limited water resources more efficiently.”

Hall agrees that reduced erosion is another T-L advantage, saying, “Land leveling for a T-L installation is minimal. With a T-L center pivot we can just sort of go with the natural lie of the land.”

“You have to understand that cane uses a lot of water, and when it reaches one meter (about three feet) high it uses even more water,” Hall explains. “Cane will grow at the rate of eight tons a hectare (3.2 tons an acre) per month.”

“So you’ve got to put water on it. As soon as you stop, though, you can notice a difference straight away.”

The plantation utilizes four irrigation monitors. The maximum the soil can hold is 50mm (approximately two inches) of water. When that figure gets down 50 percent, irrigation water is applied to bring soil moisture back to 50mm. 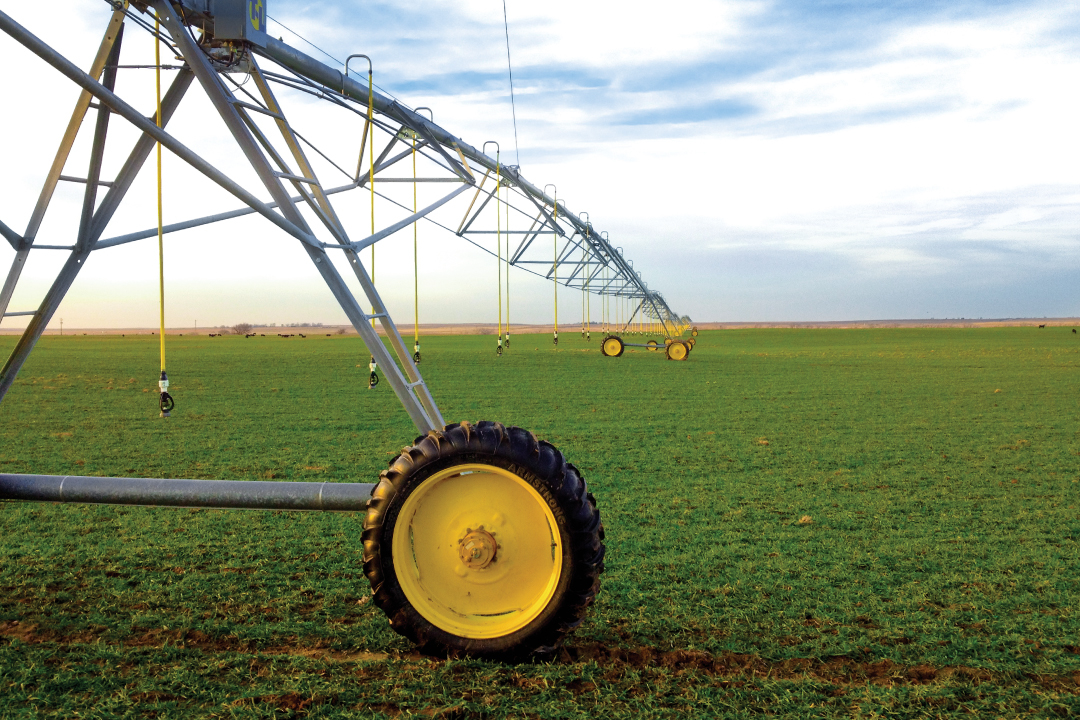