Escambia County, Florida
Back to Testimonials

"If you have a problem with a T-L, you can generally see it. I can’t see electricity."

It’s not often that a farmer can take a field that’s in the bottom 25 percent of the farm’s acreage in terms of productivity and move it to one of the top-performing fields. Certainly, improved fertility can help. But when the field lacks water-holding qualities, even the best fertilizer program can’t make that much difference.

Still, that’s the kind of improvement Sam Walker saw in two of his fields in Escambia County, Florida, after installing a T-L towable pivot. Today, having purchased the first T-L unit in 2008, Walker is up to five T-L pivots – four towable units and one fixed pivot that covers 85 acres.

“We started by putting the pivots on our lighter soils, which didn’t produce as well,” says Walker, who farms in partnership with his wife Vivian and his son, Scott. “We bought one that first year, one in 2009 and two more in 2011. Now, we’re in the process of putting in our first permanent pivot.”

Although Walker occasionally grows some corn on the farm, which has been in the family since 1915, his main crops are cotton and peanuts, which were his only crops this past season. And even though the Florida panhandle generally gets ample amounts of rain from the clouds that drift up from the Gulf, there are still times that a crop can go three to four weeks without it.

“Cotton needs the water worse than the peanuts do,” he relates. “But even the peanuts need moisture when they’re filling the nuts. If the quality’s not there and the peanuts are stressed at the wrong time, you can lose half your price. If the peanuts are damaged, they have to go for oil instead of nuts, so the price drops dramatically.”

As long as the quality is there, though, the Walkers’ peanuts go to markets that use them for peanut butter and candy. The larger peanuts that are generally sold in the shell, he explains, are grown farther north in states like Virginia.

“The quality on cotton, on the other hand, isn’t affected that much by drought, compared to the peanuts, but the quantity is certainly affected,” he continues. “The varieties we have available to us now have super potential to produce, but they need moisture. Consequently, our highest yields are in the fields where we have irrigation.”

Of the four towable units on Walker Farms, one is in a long, narrow field, while the other three are in fields that are adjacent to each other. Of those, one is moved between two fields and the other is a 600-foot unit that is moved between two fields on opposite sides of a road, plus part of another field, for a total of 120 acres. Last, but not least, is the permanent pivot, which was just installed this past spring to irrigate around 85 acres. Consequently, Walker is now able to irrigate around 400 acres, or about 20 percent of the farm.

“By using the T-L towables on two or three fields each, the cost per acre is a lot less than it would be with stationary pivots,” he relates. “Of course, they’re more work, too. Fortunately, T-L pivots are relatively easy to move. If it’s a straight pull, I can move the machine by myself in about 30 to 45 minutes. It’s just a matter of spinning the cart around and hooking it up to the tractor.”

Walker admits that there are some years, when rains are timely and plentiful, that he doesn’t see any benefit from having irrigation available. On the other hand, he has seen peanuts yield as much as 3,000 pounds more on irrigated versus non-irrigated fields in dry years. In order to give the crop the most yield potential, he plants peanuts in twin rows on 38-inch centers. Finally, to keep it simple, Walker says he generally tries to plant all the fields that are irrigated by the same towable in the same type of crop. Otherwise, different crops often require a different watering schedule, which can lead to one crop getting shorted when it needs water the worst.
Walker says his biggest challenge these days isn’t water, but rather protecting the peanuts from deer and wild hogs.

In an attempt to keep hogs and deer out of fields, Walker has sprayed repellents on the crop, hung reflective pie pans and/or applied perfume around the field edges and installed electric fences around the field. The worst damage, he explains, occurs when hogs get into the peanut fields. However, they can also damage cotton when they go down the rows searching for and digging up peanuts that remain from the previous crop.

“We’ve tried everything and spent a lot of money in the process,” he admits. “But with commodity prices the way they are, you can’t just let them eat up the profits. So you have to do something to control them.”

Fortunately, Walker has no such problems with his T-L pivots, which is one of the reasons he prefers T-L units.

“I like the hydraulics and the continuous movement; and I like the dealer,” he says. “I’ve known Jackie (Helton) for nearly 40 years and I know I can always count on Helton Irrigation (in Walnut Hill, FL) if we have a problem.

“I also like the safety issue of the hydraulic drive,” he continues. “If you have a problem with a T-L, you can generally see it. I can’t see electricity.”

As a result, Walker says he will continue to specify T-L units as he moves forward.

“As profits allow, we intend to add more T-L pivots, putting them on the poorest fields first, just as we have in the past,” he concludes.

“We still need some better commodity prices, but at least we have the benefit of consistent, if not higher, yields on our irrigated acres.” 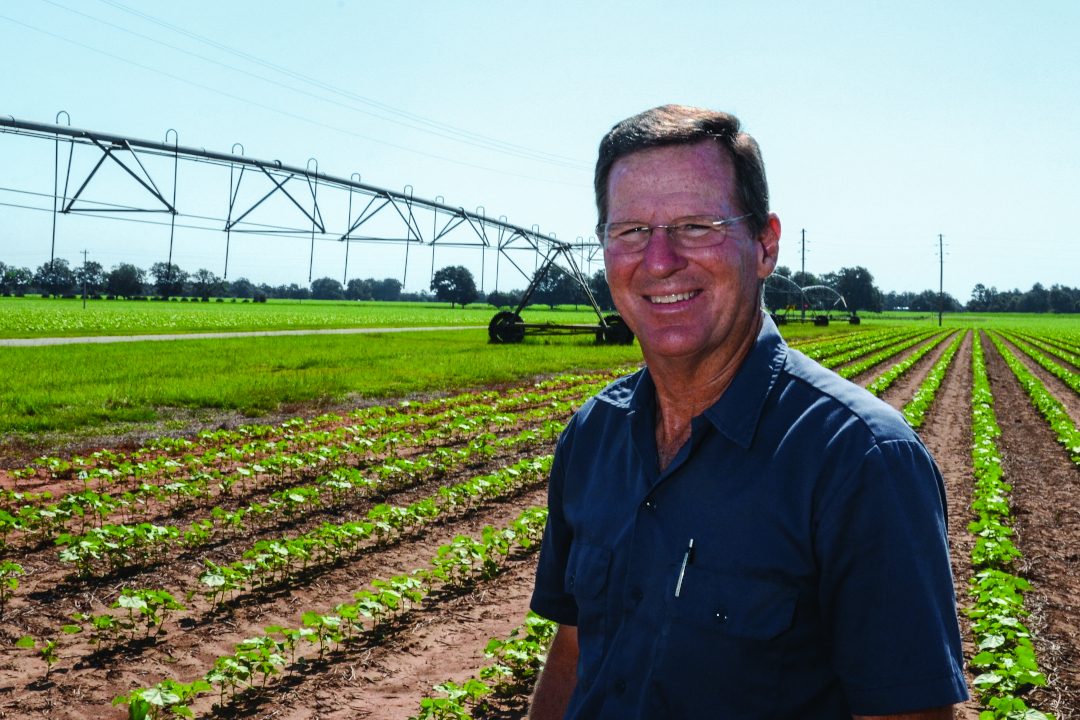