Juniata, Nebraska
Back to Testimonials

"One of the best things about a T-L unit is if I ever need to work on one, I could do it myself. Most farmers understand hydraulics, since almost every piece of equipment they use has hydraulics. I wouldn't have to call an electrician."

When he explains why he prefers a T-L center pivot, Ryan Weeks taps his fingers as he observes, “A T-L never quits moving.”

“In the first place,” he continues, “except for a silage guy running into one of the towers, all of our T-Ls have been pretty trouble-free. We’ve never replaced a gearbox or even had an oil leak. We’ve never had a problem yet with a T-L.”

“All we do is run them through the maintenance program every year. They’re great.”

This includes a T-L unit initially installed 30 years ago. Since then it’s run 650 to 1,200 hours every summer. Although it was designed as a high pressure system, Weeks says it’s now operated at a medium pressure.

Figuring an average of 800 hours a year, he estimates that this particular T-L has operated at least 24,000 hours; and it is still waiting for its first major repair.

Altogether, Ryan and his father, Mike, farm 2,400 acres near Juniata, Nebraska, which is divided among no-till dry land, ridge-till gravity irrigation fields, and a combination of ridge-till and no-till under the center pivots. The men operate six pivots, three T-Ls and three non-owned electric systems. Field-wide, their irrigated corn generally produces more than 200 bushels an acre.

“One of the best things about a T-L unit is if I ever need to work on one, I could do it myself,” Weeks continues. “If we’d need a part we’d have it within 24 to 36 hours, too. T-Ls are simple. Most farmers understand hydraulics, since almost every piece of equipment they use has hydraulics. I wouldn’t have to call an electrician.”

In contrast, he points to a breakdown on one of the electric sprinklers last spring. The first dealer the Weeks called said he could be on the farm in maybe five days. The second dealer in the area thought he could possibly be there in three days.

“This is the biggest problem we have with the electric units, that and I’m just nervous around electricity. With a T-L the worry factor is gone.”

He says that when they hear a whine coming from an electric center pivot, they know they’re soon going to have to be doing some mosquito-fraught replacement work.

Another way to look at, “It never quits moving,” according to Weeks, is that the corn grown under T-L irrigation this past summer looked “100 percent better” than corn under the electric center pivots.

“On one farm in particular, we could see the difference in sprinkler packages and the advantage of the T-L’s continuous movement,” he relates. “Some of this we could attribute partly to management changes, but a lot of it was due to a more uniform water application, because the T-L never stops.”

As for comparing a center pivot system to gravity irrigation, Weeks emphasizes that there’s really no comparison. The center pivots, he says, represent “a lot less work, more efficiency and less sweating.”

Meanwhile, Ryan and his father are convinced that today’s farmers must be stewards of their resources, especially in an area of declining water tables.

Their experience has been that a center pivot system uses half the water and half the fuel that is required to cover the same number of acres by gravity irrigation, thinking that might be a conservative estimate, too.

They believe the old “Time is money” saying applies to center pivot superiority quite well, Weeks also equates the effort saved to precious additional time with the family, getting more things done and the capability to take on more acres.

He’s also noted the many technological advances made in T-L systems as time has gone on, commenting that, “There’s been so much done with end guns, booster pumps and drops. Everything is just all-around better.”

“I like the fact that T-L’s owners were and are still farmers,” he smiles. “Anybody can invent something. But, until there’s a practical application you don’t know it’s going to work.”

GPS is just one of the modern “tools” used on the Weeks’ farm. As Ryan points out, “We’ve invested in technology.”

This consists of using variable rate seeding with their corn planter for the past three years; utilizing a yield monitor and its mapping ability on their combine, then writing “prescriptions” for their dealer to apply variable-rate fertilizer that contains many micronutrients.

Ryan is a member of the Nebraska Leadership Education/Action Program (LEAD), a select group of farmers dedicated to developing a network of highly motivated leaders for agriculture. 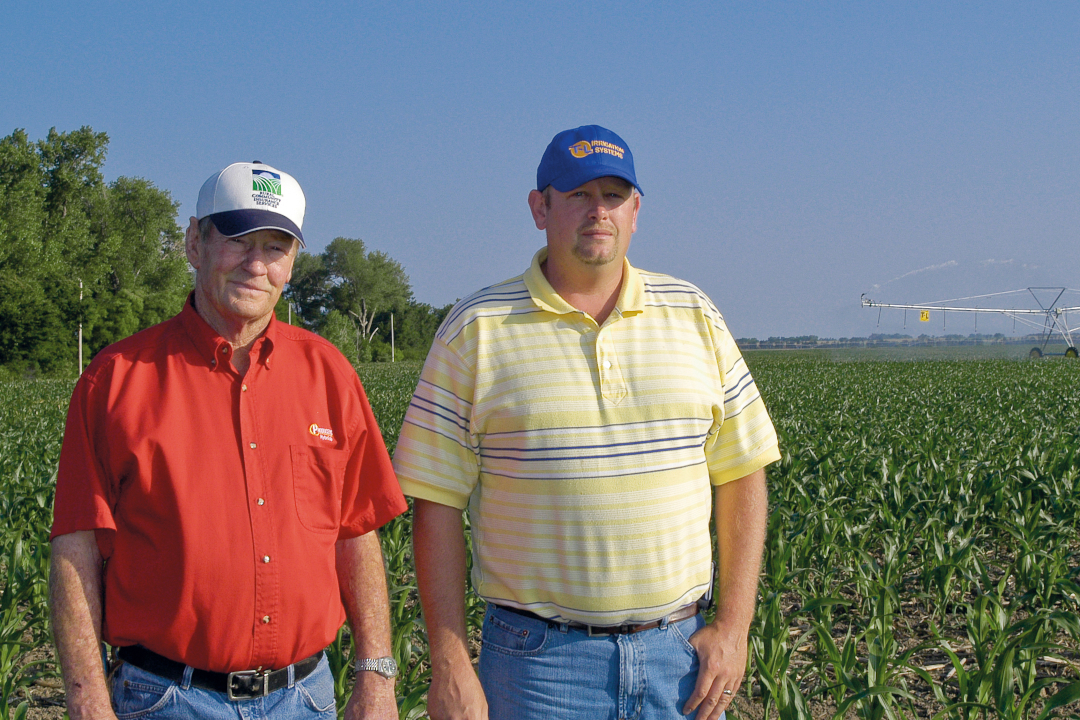