Castleford, Idaho
Back to Testimonials

"If you watch, an electric pivot will stop and start hundreds of times as it goes around the field."

As an irrigation manager for Primo Farms, Rick Rodges isn’t the one who makes the final decision on center pivot irrigation system purchases, but he does have a strong opinion about the subject and he’s not afraid to share his thoughts and suggestions with the farm’s owners.

Perhaps that’s why the last six center pivot systems installed on the farm’s Castleford, Idaho, operation have been T-L units.

According to Rodges, Primo Farms first expanded onto the bench south of Salmon Falls Creek, located approximately 20 miles north of the Nevada border, in 1996 by purchasing 3,200 acres from a family estate.

Ironically, Rodges was already farming in the area, having moved with his parents from Colorado to Idaho in 1973. “My wife and I still have 400 acres of our own land that we bought in 1980,” he says. “In fact, we were still farming it ourselves until four years ago.”

That’s when Rodges took the job with Primo Farms and rented his land to his new employer — making him, in a sense, both a landlord and an employee.

“Primo Farms actually expanded here from Aberdeen, Idaho, where they have another 4,000 acres,” he explains. “The difference is they rent a lot of the land in Aberdeen, but they had the opportunity to buy the ground here.”

Since most of the property was under flood irrigation, the first thing the new owners did was install 12 electrically driven pivots and plant the farm to a 50/50 mix of wheat and alfalfa. Today, a total of 1,900 acres is under pivot units. Another 280 acres is irrigated with wheel lines and the balance is in corners or flood irrigated.

“Fortunately, all of the most recently installed pivots have been T-L units,” Rodges explains. “That includes three 40-acres pivots that are positioned inline in one narrow field and three quarter- section pivots that were put in last year.

“The owners have also told me that any new pivots they add from now on will be T-L models,” he adds.

Rodges is quick to list of number of reasons for his preference, but chief among them is the reliability, which translates into less maintenance.

“I realize the electric units are over nine years old, but I’ve already had to change four motors this year,” he relates. “And then there’s the problem with flies and leafcutter bees getting into the control boxes and causing electrical problems.

“The manufacturer claims their boxes are sealed, but I think leafcutter bees could get into a glass jar with a lid on it,” he says with a grin. “One little fly in the wrong place can hold a switch open and bring the whole thing to a stop.”

In contrast, Rodges says the T-L units seem to go non-stop… literally. Unlike the electrically driven units, which stop and start repeatedly, he says T-L’s hydraulic drive system moves slow and steady day in and day out.

“We try to put on 1 1/2 inches of water on the alfalfa every six days,” he says. “Over the same time period, we’ll put about 1 1/3 inches on the wheat until it’s almost ready to harvest. After we’ve cut and baled the straw, we’ll water the fields again to build up a reserve for fall.”

One of the things Rodges always notices, though, is that the wheel ruts under the T-L pivots are always several inches shallower than those under the other pivots.

“If you watch, an electric pivot will stop and start hundreds of times as it goes around the field,” he explains. “And it’s not an easy stop. Every time it stops, it jerks; and every time it starts, it jerks.”

“Since the tracks are filled with water, the wheels also tend to slip almost every time they start,” he continues. “Naturally, that just digs the rut a little deeper.”

That may not be an issue with some people, but Rodges says it matters when he and the other employees have to run a windrower and big square baler over the field three times a year.

While the wheat is evenly divided between spring and winter varieties for grain, alfalfa is grown and managed primarily for the dairy market. Last year alone, the farm shipped nearly 6,000 tons of alfalfa in 4 X 4 square bales to dairies around Twin Falls and Jerome. Hence, shallower ruts mean less bouncing and less wear on trucks, balers and implements alike.

In his mind, it’s just one more example of how a T-L system makes it easier on the operator… whether he’s managing the pivots or traversing the field in a tractor. 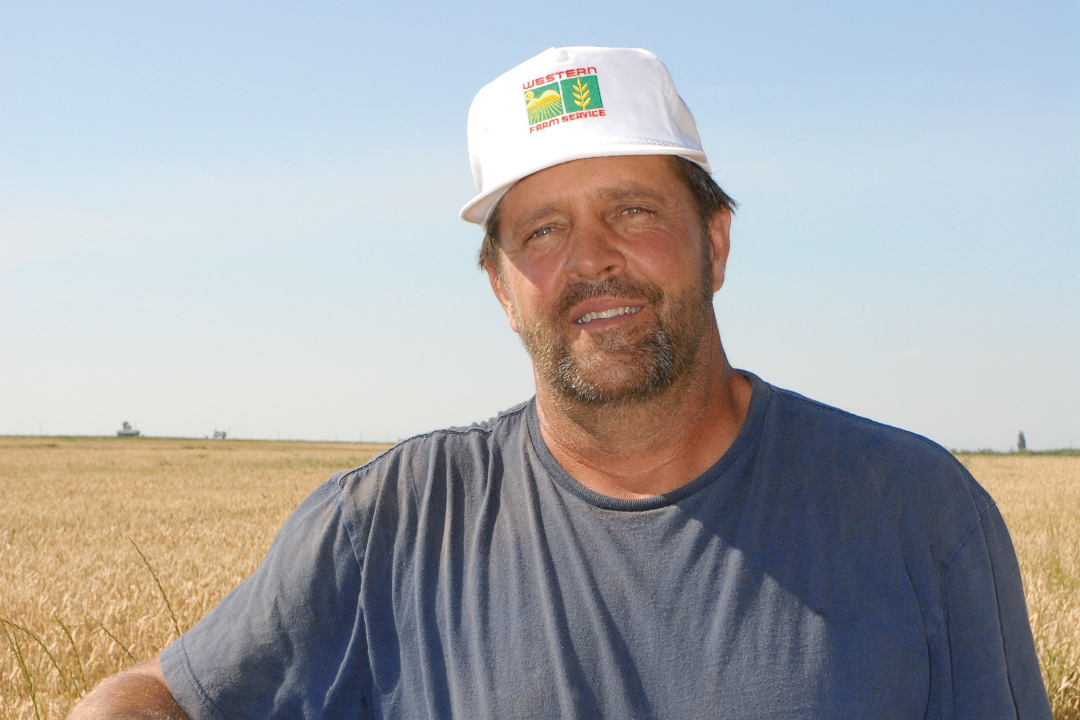