Rock Port, Missouri
Back to Testimonials

"My children were growing up on the farm at the time, and we just thought T-L offered a safer solution..."

Richard Oswald has never felt that water and electricity were a good mix, which is one of the reasons he has always preferred T-L center pivot systems over electric pivots. However, he never thought of safety in terms of floodwaters.

In the last 20 years alone, at least four of the six T-L center pivots on Oswald’s 2,000-acre farm near Rock Port, Missouri, have been partially or totally submerged in water from the nearby Missouri River. Prior to that, the area hadn’t experienced widespread flooding since 1952, before the current levy system was finished.

Although Oswald’s farmland used to be split nearly 50/50 between hill country and bottoms, the mix has changed significantly since his son, Brandon, started farming in 1989.

Today, most of Richard’s farm ground is in the river bottom, while most of his son’s land is in the hills. Although portions of the farm are owned together, other fields are owned and managed individually. Interestingly, some of the land that Richard and his wife, Linda, farm under the umbrella of Oswald Farms is also fifth-generation property owned by cousins living as far away as New York. In fact, they technically own five of the T-L pivots, even though they left the purchase decision up to Oswald.

“The worst thing about the gumbo in the bottoms is that when you till it and leave it exposed to the wind, it tends to blow and drift worse than sand,” Oswald insists. “When it’s wet, it’s the heaviest soil you can imagine, but it can also be like powder when it dries.”

That’s why Oswald has been using irrigation for as long as he can remember and a total no-till program since 1986.

“Not only does no-till farming reduce the potential for erosion, but it offers a tremendous amount of savings in fuel and equipment. Tillage implements wear out and I don’t see a need to put that many hours on a tractor.”

Oswald has the same conservative view of center pivot irrigation. “My father purchased the first T-L center pivot in 1984 after years of he and I wading irrigation ditches and moving pipes and siphon tubes,” he says. “We liked the idea of the oil drive in place of electric motors. At the time, I remember reading that electrocution was the second leading cause of death in farmer fatalities; and I think center pivot irrigation systems were the leading cause within the category. So that made an impression on me.

“My children were growing up on the farm at the time, and we just thought T-L offered a safer solution…”

“My children were growing up on the farm at the time, and we just thought T-L offered a safer solution,” he adds. “I understand that electric drive is what most of the center pivot industry has evolved into; but as long as there is still another option, I’ll take it.”

Little did he know at the time, though, that T-L pivots would be better suited to withstand submersion in flood waters. Unlike the flood of 1993, which came and went quickly, due to heavy rain throughout the Midwest, the 2011 flood occurred when the Corp of Engineers opened the spillways on dams in South Dakota for an extended period of time. In fact, Oswald was forced out of his own home for nearly four months.

“After the flood of 1993, all I did was pull the drain plugs on the drive units and refill them,” he says. “We never had any other damage. However, the towers on four of the six pivots were setting in water for 14 weeks or more this time.

“I don’t anticipate too much more damage than last time, but I certainly wouldn’t think it would be good for electric motors to set in water that long … even if they are sealed to withstand normal conditions.”

Oswald insists he also likes the continuous movement of the T-L units, which was once more important than it is today.

“I don’t think they have as many problems as pivots that start and stop every few minutes,” he relates. “We certainly haven’t had any problems anyway.

“However, it was an even bigger issue when we used to do a lot more chemigation,” he adds. “Several years ago, when Dad was still farming, we used to put on a majority of our fungicides through the pivot. However, with Bt corn, that has pretty much ended.”

Oswald says he has also cut back on his practice of applying liquid fertilizer through the pivots as the price has increased. Today, he puts most of his nitrogen on in the form of cheaper anhydrous ammonia, even though he had great success with liquid nitrogen applied through the pivots just prior to tasseling.

“I still think T-L pivots are a good investment, though, even if they aren’t used for anything more than insurance in dry years when you need moisture,” he says. “We’ve fought wet more than we’ve fought dry the last couple years or so. But if you consider the price of a combine or tractor compared to a center pivot, knowing that the center pivot is going to last a lot longer, it’s still not a bad investment ‚Äî especially when bottom ground is selling for $5,000 to $6,000 an acre and corn is selling for over $7.00 per bushel.” 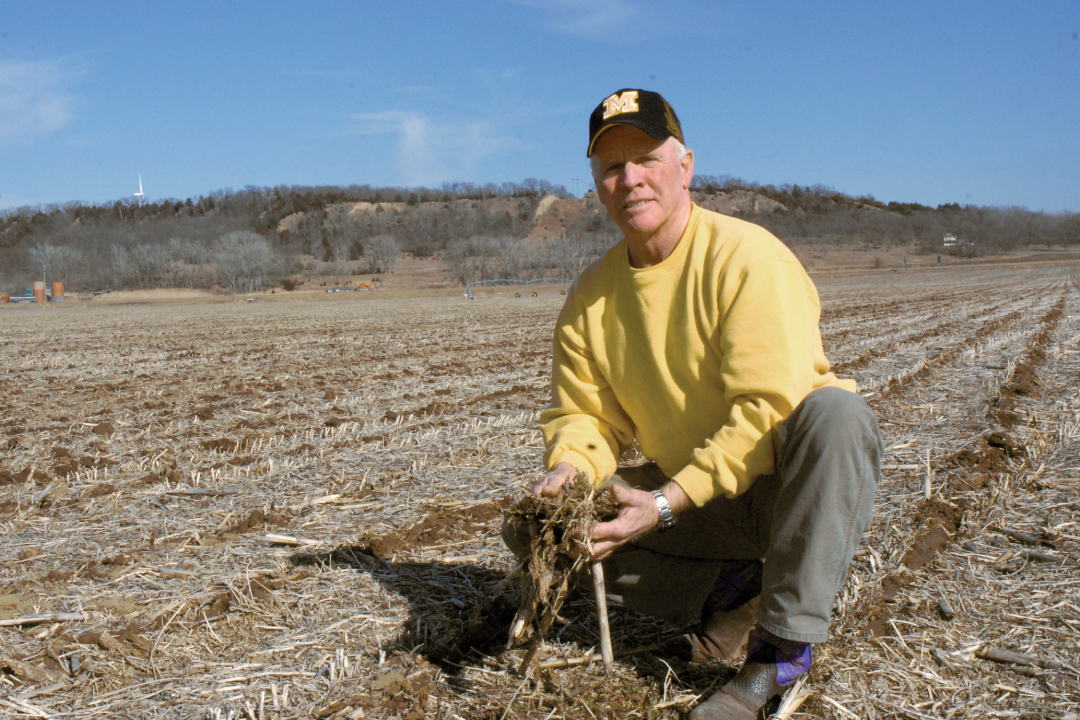