"Irrigation can add another 100 bushels per acre. We’re seeing yields of 220 bushels and up."

It takes a lot of corn and wheat to raise 2 ½ million turkeys from poults to 40-pound birds ready for processing … more than Paul Talley can produce on 3,500 acres near Rowland, North Carolina, even though nearly a third of the farm is irrigated with T-L pivots.

“We can raise enough corn on our own to last about one month,” admits Talley, who actually sub-contracts part of the turkey production to about 20 other growers. “In fact, we actually store most of the corn we produce on our farm as a July ‘safety net’ that we can use if prices go up or we start running short.”

In an average month, Talley will go through about 30,000 bushels of corn, as well as several thousand bushels of wheat that is blended into pellets at a rate of about 20 percent wheat and 80 percent corn. To improve efficiency, Talley has his own pelleting mill and buys most of the grain from farms located around Stanfield, North Carolina, where he lives and produces antibiotic-free turkeys in about 100 individual barns. In addition to the birds they raise for the meat market, Talley Farms also houses several thousand hen turkeys that produce nearly seven million eggs that go to a hatchery.

“All the birds we produce are marketed through a company in Pennsylvania as ‘all-natural, humanely grown’ turkeys that are free of antibiotics and growth hormones and are only fed a vegetarian diet with no animal by-products,” he explains. “That means we have to take a few extra steps and precautions to keep them healthy, like letting the barns set empty a little longer between groups.”

On average, it only takes 18 weeks for brood poults to reach 40-pound market weight and about 13 weeks to finish birds that have been previously started and transferred to the finish barn at five weeks. To attain those types of weight, Talley only feeds male birds, or toms, which are processed as meat birds. That means they’re used for producing everything from turkey meatballs and ground turkey to turkey tenderloins, deli meat and turkey bacon. None are marketed as whole turkeys.

Consequently, when the opportunity arose to purchase more land for feed production near the South Carolina border following a property value depression some 10 years ago, Talley didn’t hesitate to expand the operation. In addition to several hundred acres of corn, the Rowland farm produces some wheat and soybeans. The only drawback is that the Robeson County farm is nearly 90 miles from Talley’s home in Stanfield.

Seven years ago, he began adding T-L pivots to the property to increase production and to serve as crop insurance in times of drought … particularly during corn tasseling and ear fill. Today, he is up to nine T-L center pivots covering close to 1,000 acres on both farms.

“I have two in Stanley County, where I live, and seven at the farm near Rowland, including three that I had installed this past winter,” he says. “The two near home are fed from a lake, while the ones at the Robeson County are supplied by wells. The oldest one is seven years old and is still the largest, which covers about 270 acres. The rest are four, five and six-tower units.”

“We didn’t have to turn them on very early this year, due to plentiful rain this spring,” he says. “But on average, irrigation can add another 100 bushels per acre. Instead of 100 to 120 bushels or more, we’re seeing yields of 220 bushels and up.”

Talley says he also had Precision Link pivot control installed on the three newest units so they can be controlled from his cell phone. Even if he’s at the farm, instead of 90 miles away at his home, the three newest pivots are still 10 miles from the Rowland headquarters. Hence, he can check on a pivot or stop the machine from anywhere, including the North Carolina coast, where he likes to go fishing when he finds the time.

“The remote control even came in handy when we were installing some bridges over a canal,” he relates. “There are a number of canals that crisscross the county, so as we were putting in bridges for each tower, we were able to move the pivot forward and check the position of each bridge without someone having to run back to the control box. That alone saved a lot of time.”

“While the hydraulic drive system was appealing to Talley, due to its simplicity, he admits it was the lack of high-voltage electrical wiring that sold him on T-L systems.

“We’ve had an oil leak every now and then, which, on a T-L, is something we can fix ourselves without having to call anybody,” he explains. “However, the bigger issue is copper theft. The Rowland farm is located in a rather poor area where about the only jobs are related to agriculture. So there is a lot of theft. I know of one farmer who had his electric pivot stripped and had no more than got it repaired and running when it was stripped again.”

In addition to providing timely water for higher yields, Talley says the pivots also allow him to spoon feed the corn crop with liquid nitrogen applied through the pivots. Again, T-L’s hydraulic drive held the advantage since it provides continuous movement without the start and stop motion associated with electric units.

“So far, the pivots have required very little maintenance, yet they’ve allowed us to produce a little more of our own feed,” he concludes. “With irrigation, water is one more thing we can control and the T-L pivots have allowed us to do that in a dependable manner.” 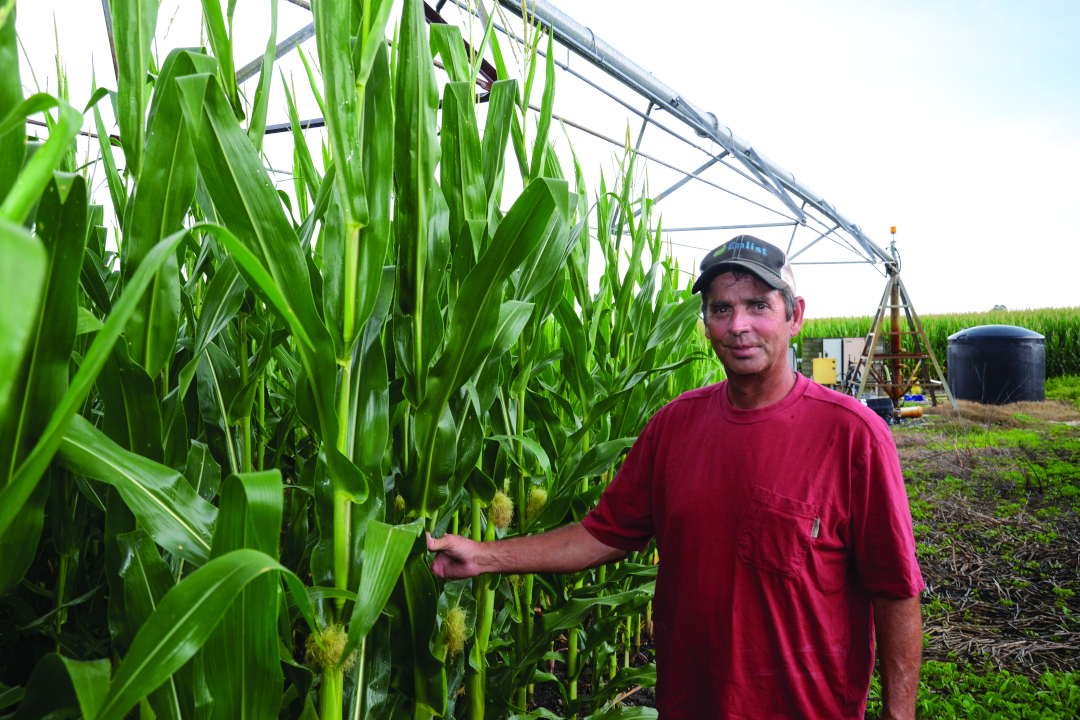