Bladen, Nebraska
Back to Testimonials

"The T-L's even water application is bound to translate into extra yield, which adds dollars to our bottom line."

Retired farmer Paul Krueger Jr. still refers to his installation of an irrigation well in the midst of the “dirty ’50s” as his “make or break gamble”. Thanks to that foresight, close to a half-century later his son, Paul Krueger III, is still farming the land and has hopes one of his three sons will continue the tradition.

Now the operation near Bladen, Nebraska, has expanded to 2,200 acres with 15 T-L center pivot systems, the first being installed in 1982. The original T-L center pivot  is still applying water in its 21st season.

The younger Krueger says he finds this interesting for several reasons. “In spite of inflation and even though the latest systems have been refined and upgraded, the last T-L sprinkler we bought this past year cost just $2,600 more than my father’s original one. That amazes me,” says Krueger.

“Not only that, but in addition to routine maintenance we figure we’ve spent less than $500 total in repairs on it over more than two decades,” Krueger says. “Now that’s reliability.”

Krueger minimum-tills and no-tills his dry land acres, and ridge-tills the irrigated ground. Under irrigation his corn averages 185 bushels an acre and his soybeans in the low 60s. Average rainfall ranges between 18 to 24 inches annually, but half may arrive in a single month.

“Our soils are productive, and irrigation is what lets us capitalize on them and so maximize our yields,” Krueger explains. His father also experimented with gravity irrigation for many years. All those fields have since been converted to sprinkler irrigation, with great justification, not to mention relief, according to Krueger.

“You can stretch a sprinkler’s water so much further,” he notes. “For example, a 600 gallon a minute well that maybe would be lucky to do 80 acres under gravity can easily cover a full 130 acres through a pivot system.”

Then there’s the indisputable fact that gravity systems are extremely labor intensive. Krueger’s now getting all the farm work done with the help of one hired hand. If he had the same number of acres under gravity irrigation he says he’d need at least one more full time man plus “a bunch of seasonal help and we’d still be running ourselves ragged at times.”

“With the sprinklers, we just turn’em on and then drive around to check them a couple of times a day,” he smiles. The 15 T-L sprinklers can also readily handle all the ups and downs of the topography. However, in contrast, in one 80 acre field under gravity irrigation they were compelled to put in even more effort since the water had to run in all four directions.

There are also some things that a gravity system just can’t do that’s simply part of a sprinkler’s package of benefits, according to Krueger. One rotation of the sprinkler is enough to activate the applied herbicide if no rain falls nor is forecast immediately after planting.

Also, chemicals and fertilizer can be applied with later waterings. “We like to put on 30 to 40 additional pounds of nitrogen through the systems just before the corn ears start filling,” Krueger adds.

“That can be a pretty good bang for the buck.” A neighbor’s soybeans last year averaged in the upper 40s in a field adjacent to a Krueger field that averaged 65 bushels an acre. The main difference is the head end of the neighbor’s gravity irrigated field averaged 80 bushels an acre while the low end dropped into the low 30s.

Meanwhile, the Krueger soybeans yielded about the same throughout the field. Then there’s the question of reaching the end of the growing season and there isn’t enough moisture to finish off the crop. Under gravity irrigation there’s no choice but to pump out a full soil profile.

However, a sprinkler system can be cut down to apply only .75 inch or so of water, according to Krueger. This last irrigation would be enough for the crop’s needs, yet wouldn’t waste water.

“Compared to gravity irrigation, I think in an extreme year you can probably bank on 20 bushels an acre more corn from a sprinkler irrigated field,” Krueger is convinced. “There’s no argument that sprinklers provide much more uniformity that results in higher yields.”

“We’ve learned, too, that our T-L systems go even further than other sprinklers in providing this better uniformity,” he continues. “They move continuously as opposed to a start stop electrical system. There are none of the ‘spikes’ you see when you look at the water pattern drying up behind an electric sprinkler unit.”

“The T-L’s even water application is bound to translate into extra yield, which adds dollars to our bottom line,” Krueger says. You often hear farmers complaining about having to do their irrigating. Not Krueger. Because, as he points out, “Since we can’t depend on Mother Nature cooperating year-in, year-out, if we couldn’t irrigate, we would be growing wheat and grain sorghum instead of corn and soybeans.”

“I look forward every year to starting up our T-L sprinkler systems.” MAKE OR BREAK Irrigation Krueger has converted almost all of his center pivot irrigation systems to reduced pressure drop nozzles.

While he allows that on a “nice day” there may not be much difference in effectiveness between top nozzles and drop nozzles, unfortunately there just isn’t enough such ideal weather in his area. “On a 100 degree day when the wind is blowing 30 miles an hour you can see the water pattern coming off a top nozzle system misting off into the distance,” he observes. “Meanwhile the drop nozzles are getting the water right onto the soil,” Krueger says. “I think on such a day there’s at least a 30 to 40 percent savings in water with drop nozzles, and maybe as much as 50 percent.”

One of Krueger’s landlords has established a wildlife area in a corner of a field. Krueger stands by a Pheasants Forever sign in an area fronting the adjacent main road. 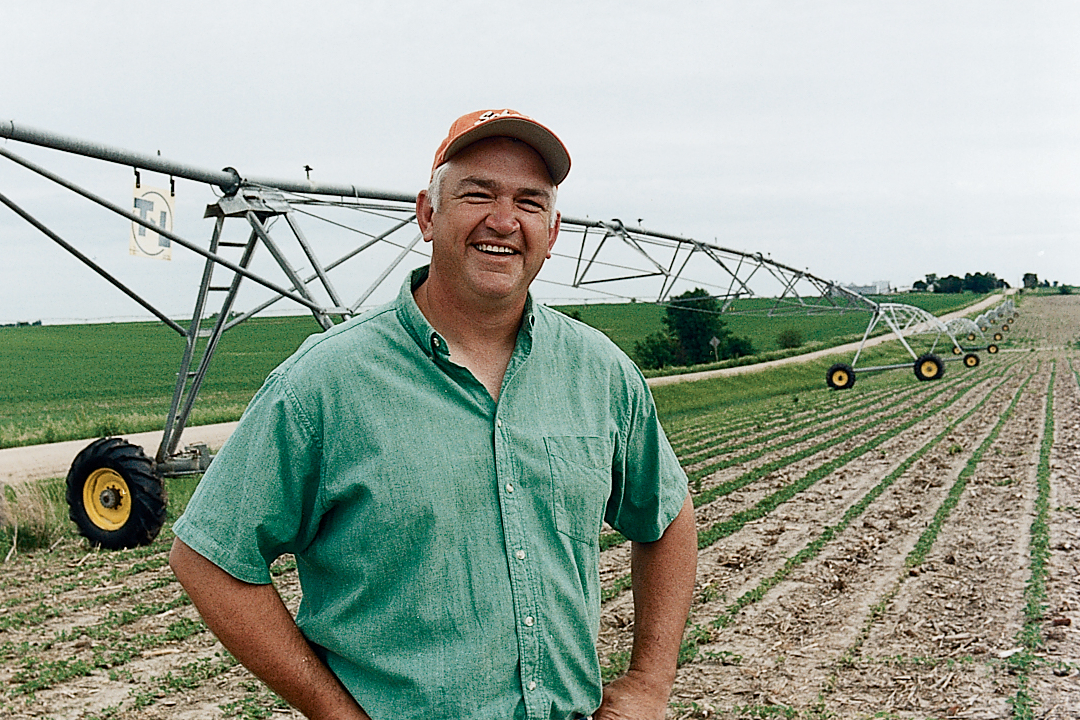