Shickley, Nebraska
Back to Testimonials

"Combining T-L's simplicity and reliability with a good dealer, I am confident about my T-L center-pivots. I just go out and start 'em and run 'em. I don't have to work on 'em."

Mike Kamler, of Shickley, Nebraska, replaced gravity irrigation with ten electric Center pivots in 1974. In 2001 he bought his first T-L system, and since then has added four more, all T-Ls. All feature drop nozzles with rotators irrigating mostly corn.

That first T-L has now run for seven seasons and 4,300 hours. The other three T-Ls each rack up 250 to 750 hours annually. Yet he’s never called his dealer to exclaim, “A pivot’s down! Hurry out!”

“I’d like to say my T-L dealer’s service is second to none, but I can’t,” Kamler comments with a twinkle. “That’s because in seven years I haven’t had a service call! The only problem I’ve had is when a cow rubbed against a pipe and broke it.”

All four T-Ls have planetary gear boxes. He’s found this to be worth the extra investment over worm gears, since he anticipates being able to run them 20 to 30 years without experiencing the gear box problems typical of electric systems. The galvanizing is also quite good, he thinks, and should result in long, rust-free lives.

Service maintenance has consisted solely of checking for grease in the fall, changing the filter and pumping air into the tires both spring and fall. He’s experienced no water issues.

The time needed to routinely service one of Kamler’s T-Ls averages an hour to an hour-and-a-half. For each electric unit, however, the time required is more like two-and-a-half to three hours.

He’s certain he can “Definitely!” see more uniformity in his T-L-irrigated fields due to the systems continuous movement. A few minutes spent up on an electric system’s tower while his son was at the pivot point doing the moving further convinced him.

“Its instantaneous jerk when it kicked into gear almost threw me off,” he says. “Also, there are going to be streaks in the field where an electric center pivot stops and starts. I’m sure this affects yields. How much, I don’t know. But, whatever has a positive influence on yields puts more bushels in my bin.”

As for working on his electrics, Kamler explains that while he’s fairly comfortable around the high voltage electricity, it scares him. With 480 volts, all it would take is one slip, he cautions.

There’s an unusual developing downside for electric center pivots in his area, too. Due to the present high price of copper, thieves are coming in and making off with the copper wiring.

“Combining T-L’s simplicity and reliability with a good dealer, I am confident about my T-L center pivots. I just go out and start ’em and run ’em. I don’t have to work on ’em. My T-Ls put money in my back pocket, I believe, because they need fewer repairs and less maintenance.

“Of course,” he admits, “no matter how good a machine is, some day it’s going to break down. That’s why it’s so important to have a good dealer, like mine, behind me.

“T-Ls are just so much better! Simpler and more reliable with low maintenance,” Kamler sums up, “for the same amount of money as electric, I just don’t see why you wouldn’t buy a T-L.”

Then he decided to replace his electric with a T-L, including a corner system. The result: “It has probably 3,500 hours on it, and the unit has just been flawless,” says Kamler.

And, yes, at first glance a corner system might seem tough to justify, since it may cost an extra $1,200 an acre for each corner acre covered. Yet to purchase irrigated cropland in the area would require three times that much investment.

As Kamler explains, dry-land corn can produce anywhere from zero to 140 bushels an acre, depending on rainfall. Over the years, he figures, on an average, to have made 50 bushels an acre on his dry-land. With corn at $3.30 a bushels, that’s a gross of $165 an acre.

However, an irrigated corn average on his farm will be 200 to 220 bushels an acre. Call it 210 bushels, and that’s a gross of $693 an acre — making paying off the additional initial investment of a corner system a rather short-term thing.

Likes ridge-till
Saying there’s a pretty fine line between ridge-till and no-till, Kamler points out that he prefers working with ridges for several reasons: Water drains off of low spots better, the soil seems to warm up quicker in the spring, water has a place to go after a heavy rain, and if the corn goes down for some reason, it’s easier to get the picker snouts under it. 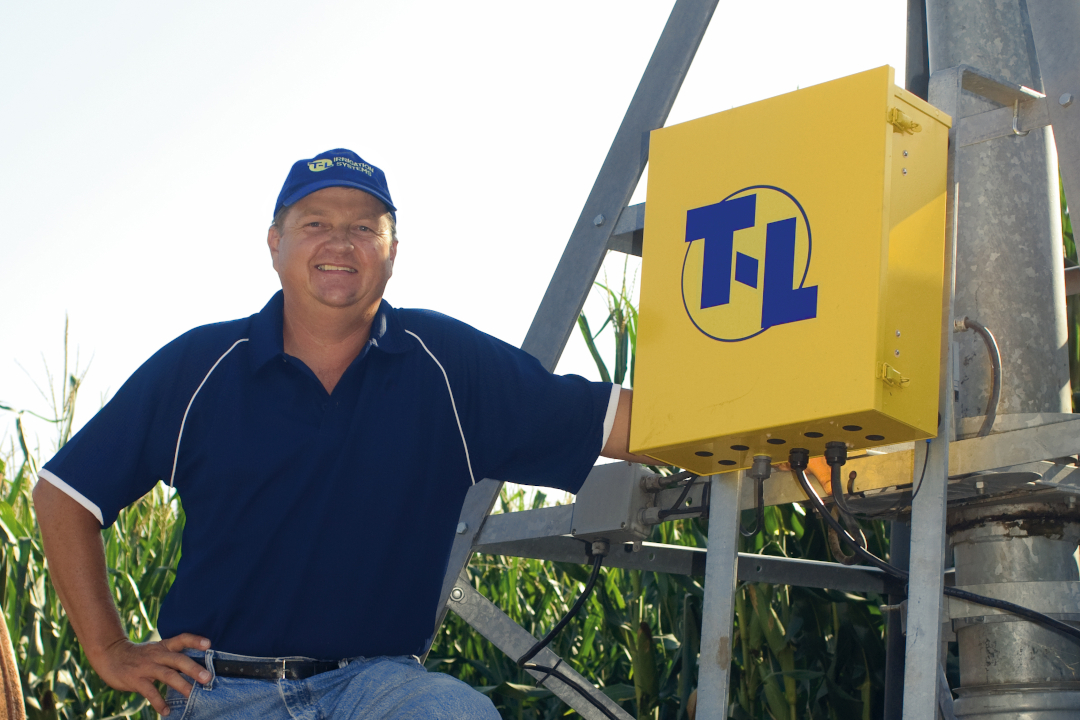