Cadiz, Kentucky
Back to Testimonials

“To me, it was a ‘no brainer’. They’re virtually foolproof.”

There’s No Second Chance To Make The Right Decision.  A strong work ethic, communication and reliable partnerships have spawned rapid growth on this Kentucky farm.

Founded just 21 years ago, Seven Springs Farms, based near Cadiz, Kentucky, has one simple business philosophy. That is, “You never get a second chance to make the right decision”. Obviously, that approach has served the company well since its beginning in 1994 as a spinoff to a farm equipment repair business and custom farming operation. Today, Seven Springs Farms, which derives its name from a group of springs located near the home farm, owns and leases approximately 34,000 acres of farmland in four counties. The operation also includes around 10,000 head of feeder cattle, a local restaurant and a wedding event center. For the majority of the acres, the crop rotation consists of corn followed by wheat and soybeans — the latter being double-cropped behind wheat after harvest — yielding three crops in two years. However, like many Kentucky farms, they also raise a small amount of dark tobacco.

“We only plant wheat on the well-drained fields, though,” says Joe Nichols, managing partner in Seven Springs Farms. “I feel like one of the keys to our success is that we always remain flexible,” he adds. “We may decide to plant something different at the last minute based on price. In fact, we even went so far one year as to double-crop corn behind wheat, instead of planting soybeans. And it worked out pretty well. “At the same time, we always analyze a situation to determine the correct decision the first time,” he insists. “You often don’t get a second chance.”

That’s part of the reason Nichols and his partners began installing T-L center pivots on the farm in 2009. They had looked at other options, but ultimately decided, based on their mechanical background in equipment repair, that they already knew enough about hydraulics to do much of their own service. “To me, it was a ‘no brainer’,” Nichols adds. “They’re virtually foolproof. Plus, I’m not going to be the one to stand in water with 480 volts. That means we would have to hire an electrician every time we need service.” Nichols says they have discovered that it’s also a “no brainer” to add T-L pivots wherever they can. Since installing the first two units in 2009, they’ve seen an average of 30 to 40 bushels per acre increase on corn and as much as a 20-bushelper- acre increase in soybeans. In addition, most of the corn they now plant under the pivots is a white variety that has been in higher demand for export to South America and Mexico.

“The best time to have an irrigation system is when you don’t need it,” he adds. “In 2013, we didn’t see any increase in corn yields with the pivots. However, in 2012, when we had a severe drought through the summer, we saw a 110-bushel difference between irrigated fields and dryland fields.” Consequently, Seven Springs Farms has been installing pivots everywhere they can find a way to do it. Counting the three more pivots that went in earlier this year, the farm total is now up to 24 units.

“From where we were in 2009, we’ve learned a lot about irrigation,” admits Micheal Oliver, partner and farm manager. “Every field where we have put a pivot has its own problems. As a result, we’ve put in wiper systems, run pivots through shallow ponds and built bridges across creeks and sinkholes.” In the meantime, they’ve found numerous ways of supplying water to the pivots, including drilling wells, pumping out of nearby creeks using a patented River Screen siphon, and building ponds or lakes to serve as water reservoirs when nearby wells are inadequate by themselves. “That’s another reason we continue to rely on R & K Pivots in Russellville, KY for T-L units,” Nichols relates. “Ken (Moore) is used to dealing with unorthodox ways to get water to a pivot and to the crop. We’ve done some pivot mapping and installation ourselves, but we’ve found that it is a better investment to pay him than to use our time.”

If there’s one more secret to their success, besides making the right decision the first time, Nichols says it’s hiring the best people he can find and dealing with the vendors and suppliers that provide the best products and services. “Everyone in our company has a strong work ethic and most of the people we work with have the same type of initiative, which has been one of the other factors that has contributed to our growth,” he adds. “The other important elements in our growth have been good communication and remote management.

“At one time, we also farmed some land in southeast Missouri, which is over 150 miles away,” Oliver explains. “I don’t know that we’d try it again, but it did teach us how to communicate and manage remotely.” To that end, Nichols, Oliver and the employees hold regular meetings to discuss their plans and goals and to coordinate activities. Nichols has also implemented a JDLink™ program from John Deere that allows him or Micheal to track machine locations, monitor fuel usage and track and plan maintenance. For the same reason, they’ve equipped all their T-L pivots with remote monitoring systems that allow them to track pivot movement, alert them if a pivot stops or even stop a pivot if a rain is approaching. Finally, they equipped one of the newest pivots with T-L’s Precision Point III system, which will allow them to have full control of the pivot from the office computer or a cell phone. Installed as a trial, it will also allow them to experiment with variable-rate irrigation, should they choose to do so at a later date.

“I guess the bottom line is we’re not afraid to try something new,” Nichols concludes. “But once we do make a decision on something, we want it to be the right one.” 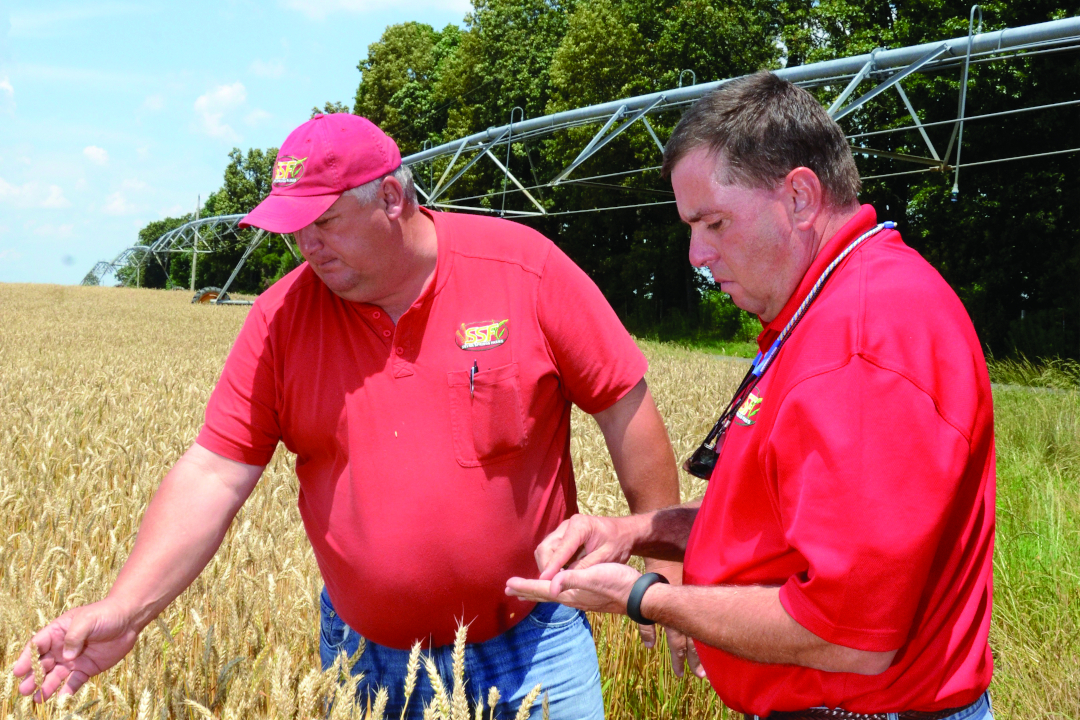