Vincennes, Indiana
Back to Testimonials

"Thieves stole the copper wire from all of our 25 electrics, and later hit one again after the wire had been replaced!"

“It all started the winter of 2006-2007”, says Matt Richardville who remembers that season well. “That’s when the price of copper began rapidly rising.” It’s also the time that when they checked their fields in early spring they found that all the copper wire had been stripped off their electric center pivot systems.

“Thieves stole the copper wire from all of our 25 electrics, and later hit one again after the wire had been replaced!” he exclaims. Richardville is part of JMR Farms, a Vincennes, Indiana, family farm corporation. They farm 4,300 acres, most of which is irrigated and using conventional tillage.

Their principle crops are wheat, field corn, and soybeans. They also produce vegetables including sweet corn and 500 acres of potatoes. JMR Farms irrigation began in the 1950s with pipe and gravity, with the first pivot irrigation system being installed almost 40 years ago.

Since three-quarters of the land they farm is rented, the number of T-L pivots they operate may vary from year to year, from nine to 12. All but one of the electric pivots hit by thieves were owned by landlords.

“A local scrap yard told me that wire thieves might make $1,500 to $2,000 from a 1,000-foot electric center pivot,” Richardville says. “Apparently some people would rather steal copper wire than get an honest job.”

So far this winter five electric systems have been stripped, one nine-tower unit twice. Wire replacement can total up to $12,000. Last summer thieves even stole the copper wire from a system while it was irrigating!

Richardville checked it at 7:30 p.m. and by 5:30 a.m. the next morning the engine was still running, but the copper wire was long gone. “It’s not just the wiring that’s stolen; sharp thieves also know that electric motors are coiled with copper”, he says, “perhaps as much as three pounds of copper in each motor.”

Matt thinks that with such a chronic problem, insurance companies are certain to become reluctant to pay claims. The result almost certainly will be increased rates at best or discontinuance of coverage at worst. JMR Farms has attempted to deter being robbed by putting steel bands around the copper wiring on their electric pivot systems.

However, as Richardville points out, “If the thieves are determined enough, they can always find a way to steal wire. Some farmers have even put barbed wire around their pipes. But, that’s both expensive and time-consuming.”

As the surest solution, he says, “Is to buy a different center pivot system with no electric wire, and this is a good reason why T-L is the front-runner.” The farm’s first T-L center pivot is now 18 years old.

Richardville says that while at that age some maintenance is required, such as replacing dry hoses, the gearboxes and hydraulic motors have held up quite well. “T-L pivots are built a little bit heavier than other systems,” he says.

“T-Ls are also the simplest system to operate and their continuous movement helps with ruts in the field, too, since a T-L doesn’t stop and start all the time.”

“And, you don’t have to be an electrician to work on a T-L,” he adds. “I’m not nervous working on a T-L in the field, because I don’t have to work around all that electricity.” He sums up his impression of T-L pivot systems by calling them, good, solid systems that the average farmer can understand even if he’s never run a center pivot before.

“Also, as far as copper theft goes, T-Ls not having wire is really a strong selling point for them nowadays.” The irrigation water in the area has a high mineral content, especially iron, which quickly discolors the systems, according to Matt Richardville who’s shown in the photographs. Note that the two systems in the background are the initial T-Ls installed on the farm 18 years ago. In the background also are the farm’s 550,000 bushels of grain storage. 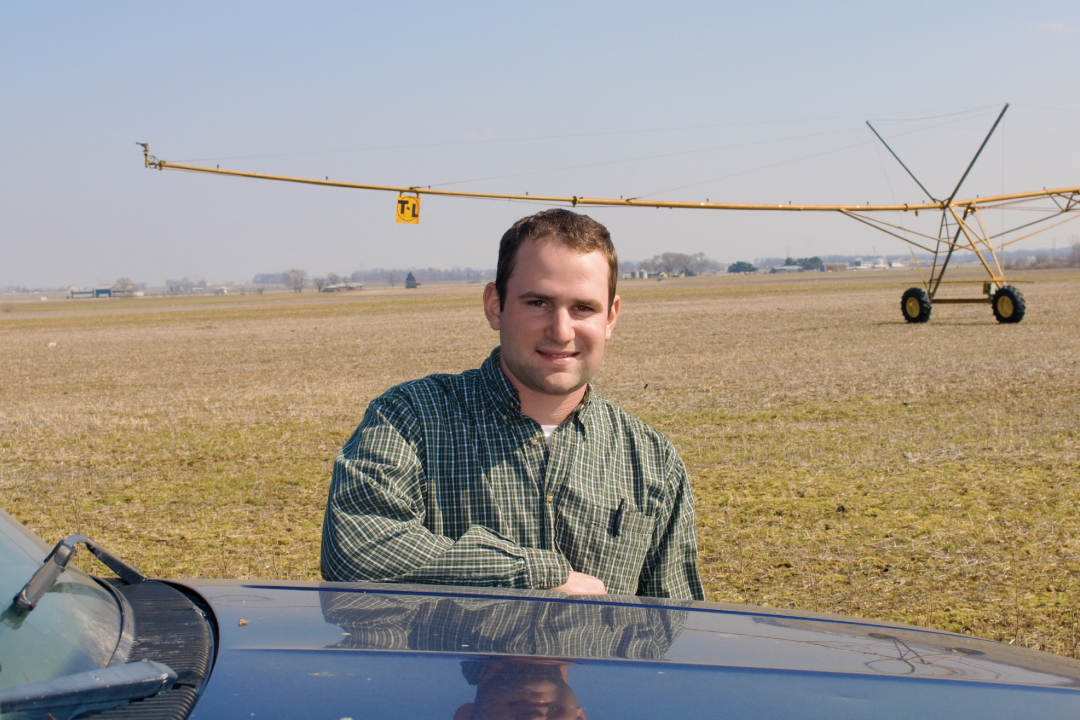