“T-L is the only brand of pivots or irrigation equipment we own. The main reason is the reliability and the stability in the production they generate.”

Six years ago, Mario Rovella owned about 4,000 head of Angus, Herford and Braford (Hereford/Brahman cross) cattle that he grazed on four different farms in the San Luis province of Argentina. Today, the cow/calf herd has grown to 20,000 head . . . a five-fold increase. No, the farms didn’t get any larger and he didn’t expand the feedlot. It’s because Rovella has installed 28 T-L center pivot units since 2011.

Located near the center of Argentina, which, in turn is in southern part of South America, the San Luis province incorporates everything from dry Pampa grasslands and pre-Andean hill, mountains and salt flats to irrigated farms of corn, sorghum and sunflowers and fields of fig trees and asparagus. It’s just to the west of the capital city of San Luis where Rovella owns the La Primavera operation. The other four Rovella farms — Santa Rita, San Jorge, Bella Vista and El Silencio — are located about 140 kilometers (87 miles) north of the capital city.

“Everything we grow is for producing cattle,” he says. “That includes 4,200 hectares (10,378 acres) of maize (corn), triticale, alfalfa, avena (oats) and sorghum — both grain and forage — all of which are under pivot irrigation. In addition, we have approximately 8,000 hectares (19,768 acres) of Buffelgrass that is not irrigated that is used as pasture year-around.

”Meanwhile, most of the irrigated crops go to the feedlot, where calves are fed grain and silage until they reach a market weight of around 420 to 450 kilograms (926-992 lbs.), or are used to supplement winter pasture. While some corn and sorghum is harvested as grain, Rovella says nearly 90 percent of all the crops are chopped as silage.

Unfortunately, Rovella says most of the soils in the San Luis province are sandy and do not retain moisture very well, which is the main reason he turned to T-L irrigation units to increase beef production.

“Our average rainfall totals about 300 millimeters (11.8 in.) per year, with most of it coming between September and March (which is summer in Argentina),” says Rovella. “So we apply about 400 millimeters (15.7 in.) of irrigation water in the summer crops and around 200 millimeters (7.9 in.) to the winter crops.”

Winter crops, or thin harvest crops, he says, include oats and triticale, while sorghum, forage sorghum and corn are planted prior to summer. In the meantime, water is drawn by electric pumps from wells that average around 250 meters (820 ft.) deep with a dynamic water level of 45 meters (148 ft.).

“T-L is the only brand of pivots or irrigation equipment we own,” Rovella continues. “The main reason is the reliability and the stability in the production they generate. We’ve had very few problems; but even if we do have an issue, service has never been a problem. T-L irrigation in this arid zone has allowed us to transform our operation from a cattle breeding field into a highly efficient meat-producing business,” he concludes.

However, Rovella isn’t done yet. Based on his success with T-L pivots, he is already planning to add 15 T-L towable pivots to the operation. And you can bet that will translate into even more beef. 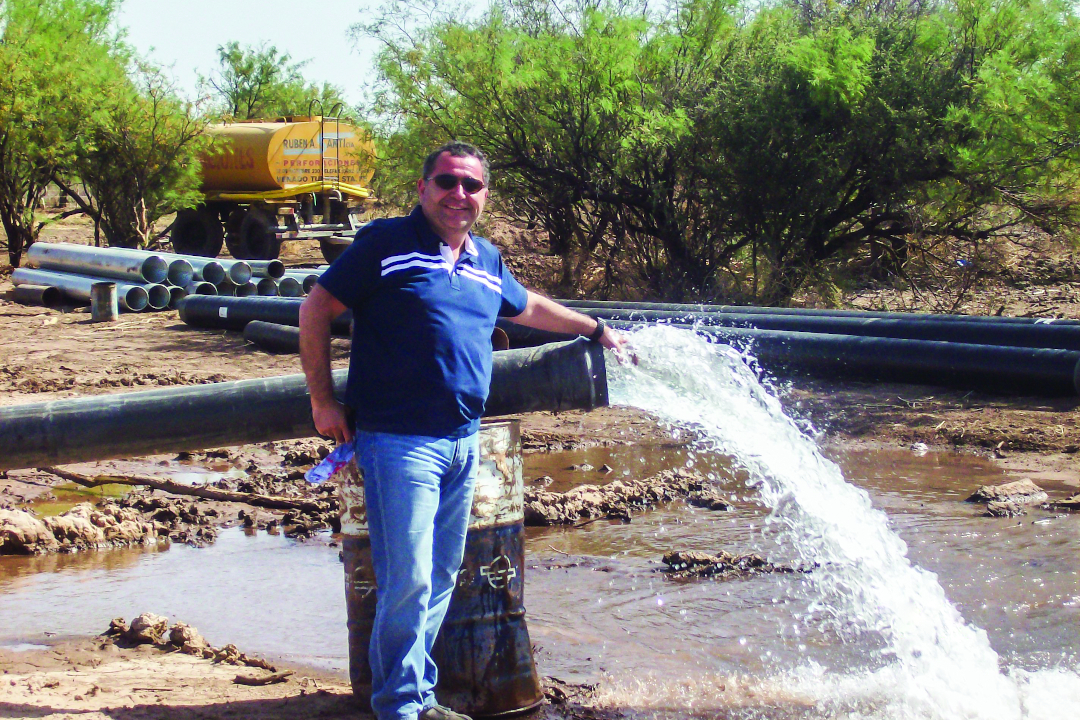