Scottsbluff, Nebraska
Back to Testimonials

"When we do need to do something with a T-L, we can have an employee do most or all of what needs to be done. We don't have to hire a $100 an hour electrician to come out here to fix it."

Twenty-five years ago, Dallas Larsen had two good experiences: His son Lex was born and he installed his first center pivot system, a T-L.

Now Lex is in charge of their operation near Scottsbluff, Nebraska. And, the T-L is still going around doing its job of irrigating with little or no sign of its “maturity”.

There are 400 acres of corn grown mostly for silage and 200 acres of alfalfa hay on the place. Two T-Ls, with a third being installed this year, and flood irrigation share the watering duties. Two feedlots provide a 10,000 head capacity that’s turned twice annually.

Not too far away at Lusk, Wyoming, the Larsen’s run a 600 cow beef herd. Irrigation there is via two pivots on corn, three pivots on grass, and eight pivots on alfalfa hay. The mode of tillage is moving more and more from conventional to minimum-till.

At both locations rye is drilled into the stalk fields after the corn is harvested for silage. This provides both winter cover and excellent grazing for stocker cattle.

“That first T-L is as old as I am. It’s been pretty reliable. The way it’s working it’ll probably still be sprinkling when a son of mine takes over,” Larsen says with a smile.

The Larsen’s T-L dealer has kept precise records on their T-L irrigation systems. Over the years these figures show they’ve averaged spending less than $20 per tower annually for repairs and maintenance.

“When we do need to do something with a T-L, we can have an employee do most or all of what needs to be done. We don’t have to hire a $100 an hour electrician to come out here to fix it,” says Larsen.

“Also, with a T-L we have no worries about somebody getting electrocuted while working on the system. A little hydraulic oil on you is better than risking electrocution.”

And, if a problem with a T-L does develop, according to Larsen almost anyone who’s been farming knows something about hydraulics. As he notes, “Even somebody new to center pivots can dive right in and feel his way through without hurting himself.”

The main reason the first T-L system was installed and why more have been added over the years is to provide enough corn silage for the cattle operation without having to buy outside.

Larsen says that thanks to a combination of irrigation and advancements in corn hybrid yields the operation now produces more than enough corn silage for its needs on the same amount of ground.

The records show that their corn silage yields under sprinkler irrigation top out at 24 to 25 tons an acre. This is four to five tons an acre more than from the remaining flood-irrigated land.

“Center pivot irrigation doesn’t take nearly as much labor as flood irrigation,” Larsen continues. “It’s two hours a day for flood as opposed to just flipping a switch and checking your gauges on the pivot.”

There’s also a big advantage in efficiency, according to Larsen. Rather than seeing water running out the end of a field with flood irrigation, the center pivot is much more efficient in getting water into the soil without wastage.

“And,” he adds, ‘when it’s really hot, it’s nice to know that our center pivots can cover a crop three times faster that we could with flood irrigation.

“Maybe the best thing about sprinkler irrigation is that it helps your morale, because you don’t see your stalks shriveling up and dying.” 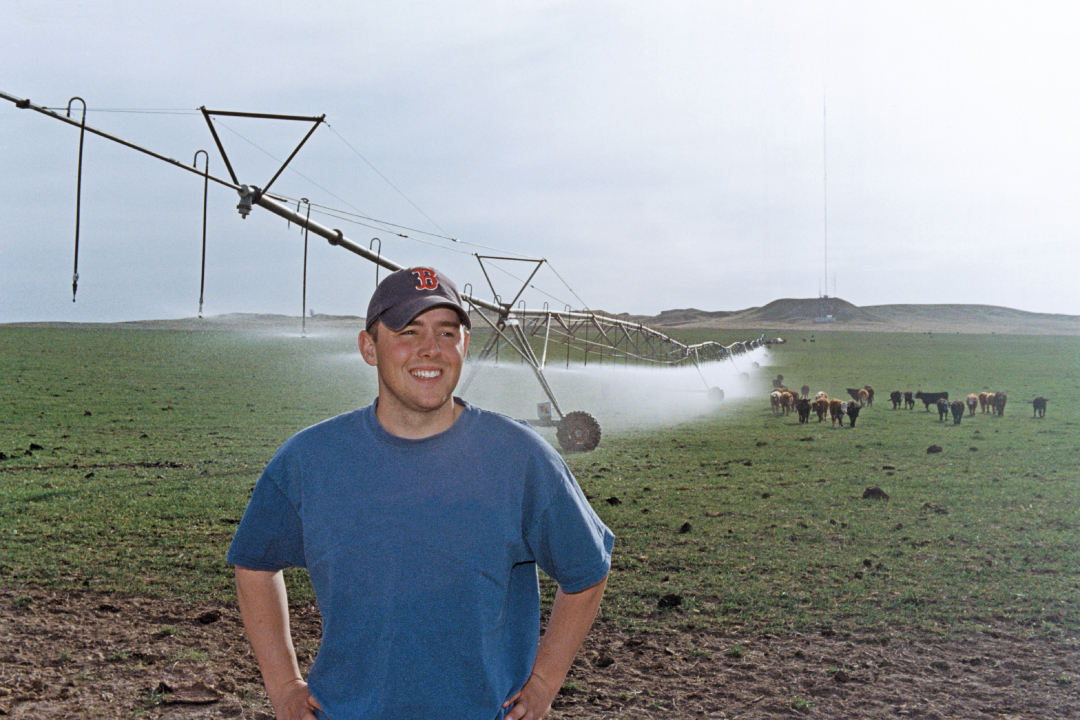