Minden, Nebraska
Back to Testimonials

“The bottom line is ‘they run’, and they run with very little maintenance.”

For LaMoine Smith, pivot irrigation and no-till farming are akin to the chicken and the egg and the question about which came first. In Smith’s case, it’s been pivot irrigation.

“It’s nearly impossible to do no- till farming with furrow irrigation,” says Smith, who farms around 1,000 acres of corn and soybeans southeast of Minden, Nebraska. “You can try, but it’s hard to leave much residue on the surface and still get irrigation water down the rows.”

Smith says he actually started no-till farming on some of his dryland acres in 1995. Before long, he had converted the remainder of the farm’s 200 acres of dryland fields to a no-till program, and had moved on to the two existing pivots.

“It finally got to the point where I could see we were saving so much money with no-till that we had to have more center pivots,” he says. “Gravity irrigation was just getting too expensive, not only in terms of poor water efficiency, but in the amount of equipment and fuel needed for tillage.”

Smith says even when he attempted to make fewer passes by switching to ridge till on gravity irrigated fields, he still had to make several passes with the tractor.

“The savings on fuel and equipment is unbelievable,” he says. “When I was doing all conventional tillage, I was putting about 300 hours per year on each of two tractors, while covering 600 acres. Now, I cover 1,000 acres and put around 350 hours on just one tractor.” Key to the entire no-till program, however, has been putting the water on from above by means of center pivot units, rather than down the row via gated pipe and gravity.

“We had two pivots when I started farming with my dad in 1983,” he explains. “One was a T-L unit and the other was a Valley electric system. Since that time, I’ve traded that first T-L for a newer unit and purchased two more T-L pivots.”

The irony is that LaMoine was the one responsible for selling his dad the first T-L, while his brother was the one who sold him the electric unit.

“I was working for T-L at the time and my brother was working for Valmont, so dad figured that, in an effort to keep peace in the family, he’d buy one from each of us,” Smith recalls.

Smith explains that after college, he worked for eight years as a district manager for T-L out of Great Bend, Kansas, before moving back to Nebraska, where he joined his father on the family farm.

As he worked back into farming in the early ’80s, Smith continued to supplement his income as a salesman for the local T-L dealership, while driving a school bus on the side. It was only after his dad retired in 1987 that he began farming full-time.

While some might assume Smith still holds a preference for T-L pivots because of his past experience with the company, LaMoine will be the first to tell you it’s really about the machines.

“The bottom line is ‘they run’,” he says. “And they run with very little maintenance. The old saying, ‘Keep it simple stupid’ or ‘KISS’ really applies with T-L.

“It just amazes me when you can put the drive components for a T-L and an electric pivot side-by-side, and people don’t just go, “Well yeah, I can see the difference!'” he says. “It’s like here you’ve got a hydraulic valve and a motor and over here you’ve got electrical switches, contacts, relay switches, timers, U-joints and electric motors. Yet, they’ll pick that one and I want to say, ‘But why?'”

even though Smith still has the Valley pivot, he says the unit has pretty much been rebuilt in the last five years as he’s replaced motors, relays, switches and gearboxes.

“It gets to the point you can’t trade it, because you have too much money invested in repairs,” he adds, noting that his brother has long since changed careers.

In the meantime, Smith traded the original T-L for a newer one and the dealer, in turn, sold it to a producer in northern Nebraska.

“The fact that a 34-year-old pivot that’s required very little maintenance or repair can be resold as a working unit says a lot about the reliability and resale value of T-L pivots,” he insists. “They just keep going. That system still has the original gearboxes and motors!”

As far as Smith is concerned, that’s a good thing, because he still has one 80-acre field that is gravity irrigated with gated pipe.

“It’s not worth buying any new equipment just to work and plant that field,” he says. “So I make-do with some older equipment just so I can furrow irrigate that field. However, the plans are to add a T-L pivot on that one within a year or two. Then everything will be no-till, whether it’s irrigated or dryland.” 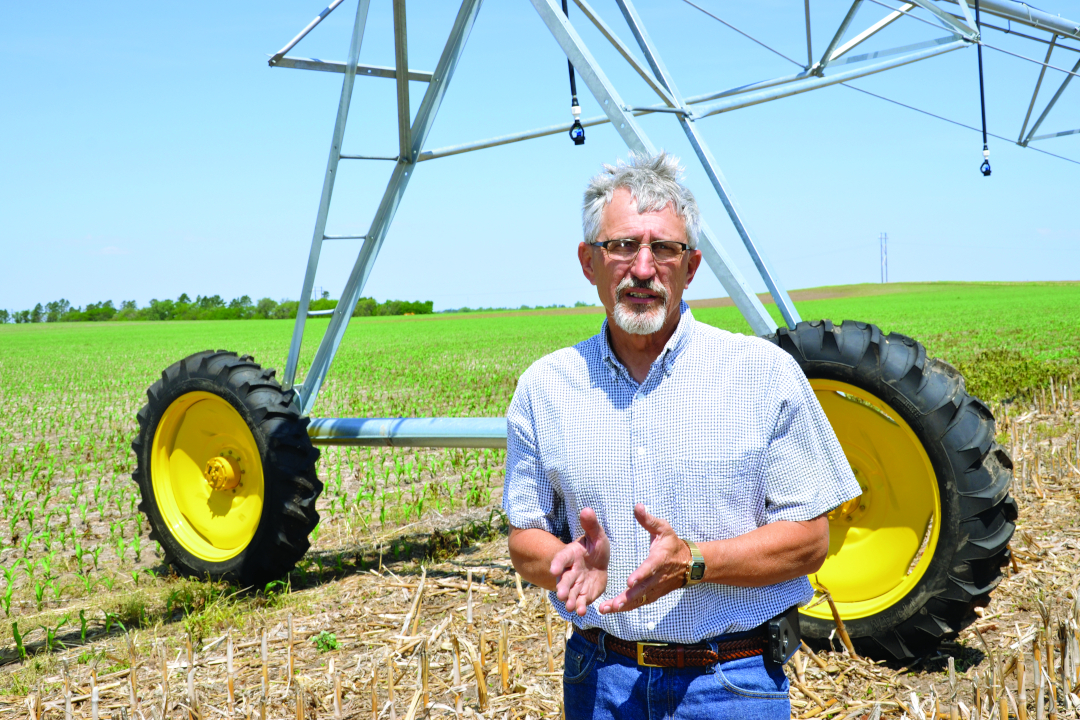