Rowena, Texas
Back to Testimonials

"A T-L is so problem-free, We don't have to worry about anything. We fire it up, and as long as we have oil in the system and plenty of diesel in the tank, we're good."

Justin and Jodi Busenlehner, Rowena, Texas, had experience working with two brands of electric center pivots on other farms before they bought a 1,390-foot T-L that was installed on their own farm three years ago.

They had to irrigate with multiple wells producing only a 425- to 450-gallon a minute water flow on land with some slope, so sprinkler irrigation via a center pivot was their only viable solution.

This was also a kind of pioneering move, because the number of center pivots in their county could be counted on the fingers of both hands.

Their system covers 136 acres of wheat and 20 acres Coastal Bermudagrass. The former is irrigated in the cool months and the latter during the summer, both used for grazing by their beef cows. They might use some of the wheat for seed, if enough supplemental rainfall arrives.

Why a T-L? The brothers can itemize a number of reasons, but Jodi sums it up quite simply: “It’s made right!

“A T-L is so problem-free,” he continues. “We don’t have to worry about anything. We fire it up, and as long as we have oil in the system and plenty of diesel in the tank, we’re good. It’s so efficient, too.”

“So, we have time to do other things instead of working on the system to keep it running as we did with an electric. This is priceless.”

Justin’s take is, “It was just a no-brainer. First, we don’t have three-phase electricity available, plus we have lots of lightning strikes out here so our electricity gets knocked out frequently, and we think electricity and water don’t mix.”

He recalls that when he and his brother used to have to work on electric center pivots, they were constantly worried about receiving a fatal shock. They were concerned about their children and their registered cows getting shocked, as well.

The brothers also point out that if they should ever have a problem with their T-L they know how to work on hydraulics. Electrics are a different story.

When they bought the unit their dealer joked with them that, if necessary, the T-L would “Be able to walk on water”. That didn’t happen, they say with a smile. However, after a four-inch rain it walked through high water in a terrace bed. Even with water nearly up to the motor, “It never got stuck and walked right on through, never missing a lick.”

The brothers also say that they appreciate that a T-Ls hydraulic lines are all metal and problem-free.

Another advantage to the T-L, they believe, is that unlike electric center pivots that go constantly on and off, the T-L moves continuously. They think this puts much less stress on the gear boxes.

“We really are glad we got the poly-coated pipe option, too” Jodi comments, “because our water is so hard. We think this will add longevity to the machine.”

Probably the greatest tribute to their T-L, though, came from a friend who’s a long-time operator of two electric center pivots. One day he expressed to the Busenlehners that, “These electric systems demand a lot of maintenance–wish I had T-Ls instead.”

Since they didn’t want to run a copper line from their wells all the way up to the center of the circle, their dealer came up with an automatic cut-off solution using radio transmitters that’s worked without a hitch.

When the automatic cut-off stops the center pivot, it also shuts down the wells. This also would occur if a tower got stuck, which hasn’t happened yet.

“For a hydraulic system we think this is really neat,” Jodi says.

“Our T-L has changed our ranch. We couldn’t have the cattle we’ve got without it,” Justin emphasizes.

During the winter of 2008-2009 no moisture came from the sky for seven months. Only the application of irrigation water kept the wheat in grazing condition for cattle. This past summer they put significant amounts of water onto a 20-acre pie-shaped segment of the circle for summer grazing.

“We figured out what it was costing us per head to graze our cows,” he smiles, and it was cheap! It was less than $10 a head a month, and they had good ‘greens’. Yes, and what’s that worth when there’s nothing else for them to eat? That’s pretty cheap water.” 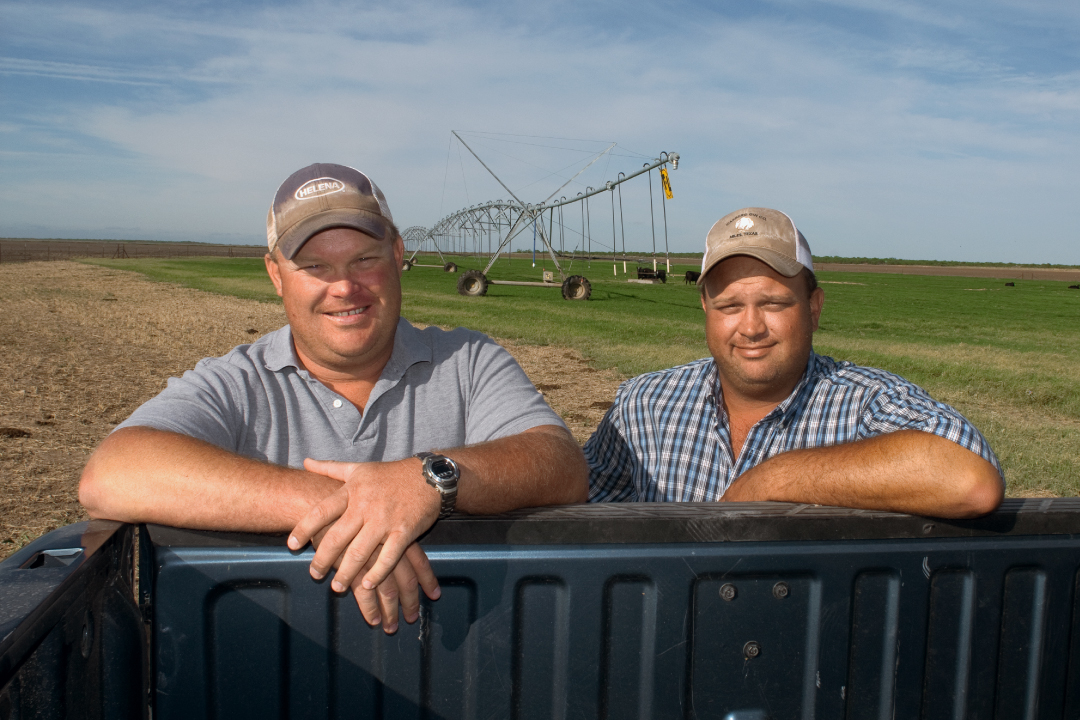