Jamaica
Back to Testimonials

"We're seeing a one year payback on our T-Ls, and that's not considering the savings from less labor and power costs either."

For years, average yields of sugarcane under flood irrigation have traditionally been 50 tons per hectare (about 2.5 acres U.S.) for The Sugar Company of Jamaica. That typical yield has been improved considerably in fields converted to significantly more efficient pivot irrigation systems. Owned by the Jamaican Government, the operation has 100,000 acres in five Jamaican Estates, 46,000 acres in sugarcane.

“Our pivot systems are giving us as much as 300 percent increase in sugarcane yields,” Operations Manager John Gayle reports.

“We’ve sustained average yields 150 to 160 tons an acre in our fi rst two crops with them, thus we are getting three times the production from the same wells, with fewer pumping hours.”

A few years ago mobile traveling sprinklers were tried in an effort to both increase water efficiency and lower labor needs. However, they required high pressure and more horsepower to work, and the cost of energy is an important factor on the island.

Several years ago, as an experiment, two center pivot systems were installed, one an electrically driven unit, and the other a hydrostatically driven T-L. The result? “Since then we haven’t purchased any more electrical systems, and now we have 30 T-Ls in our sugarcane fields,” Gayle adds.

“The T-Ls have made a big impact on our labor needs, too,” he says. “Where we used to average two hectares per worker, in the T-L irrigated fields there’s basically no one there while irrigating. The Company was initially projecting a five year payback, with a three year payback as the best case scenario. However, according to Gayle, the increase in sugarcane tonnage resulted in an additional annual $4,800 (U.S) per acre gross profi t.

“We’re seeing a one year payback on our T-Ls,” Gayle explains. “And, that’s not considering the savings from less labor and power costs either.”

Another big savings may also be in store. Sugarcane produces one crop per year, with an average stand life of five years before production declines too much. Obviously, shorter stand life translates to higher production costs, thus lengthening stand life is a major Company goal. “We’re convinced that fields irrigated with our center pivot systems will be able to go for a longer period, six to seven years or more, before having the major expense of replanting,” Gayle says.

“Our planting material is young cane. By having to replant less acreage we’ll have more production and less machinery cost, too.”

Lessening the risk of electrocution for employees was another major factor in choosing T-L hydrostatic systems over electric.

Our reasons for picking T-L hydrostatically driven systems versus electrically driven systems were many: Although large yield increases were also experienced, other negative issues surfaced; Electrical problems were so frequent that full time technicians had to be employed to keep them running, and due to their stop start operation, gravel had to be dumped in their deepened wheel tracks in order for the units to make their rounds.

“On the other hand,” according to Gayle, “Our T-Ls just keep on working.” Maintenance has been low. “In fact, we’ve encountered more difficulty with our one electrical center pivot system, than all 30 of our hydraulic systems.”

The few problems encountered have been primarily due to their utilizing older water supply pipelines and wells pumping sand. This has been solved by using sand traps and installing new PVC pipe.

“Our workmen are much more comfortable with the T-L hydraulic center pivots,” he continues. “Troubleshooting a hydraulic system is simpler for our labor to learn.”

Gayle envisions a number of important changes being implemented in the next few years:

First, a switch from applying dry fertilizer to “spoon feeding” liquid fertilizers to sugarcane similar to the way many U.S. corn irrigation producers do now to improve their yields.

Second, since the center pivots provide reliable irrigation, a just signed agreement with a U.S. company will provide a market for papayas and peppers.

Third, is a form of diversification. The Jamaican Sugar Company is seriously investigating how the greatly enhanced yields from center pivot irrigated sugarcane could be converted to ethanol. In addition to lowering the island’s need to import virtually all its petroleum needs, there’s also the tourism based economy to consider. Ethanol usage would certainly lessen the pollutant effects of engines using gasoline and help keep the environment cleaner. The Company expects to start construction of an ethanol plant in 2005, and have it operational the following year.

Boosting yields by a factor of three, of course, normally creates three times the wastage from the sugarcane refining process. This, though, is good news, not bad.

When sugarcane is crushed and the juice extracted, the trash that’s left is called Bagasse. It’s a dry material that has high fiber cellulose content. The Company is close to seeing the sugarcane refinery waste used to fuel electrical power to both operate the new ethanol plant and power the Company’s other needs. Excess power will be sold to the island nation’s power grid. This will replace energy now being purchased to run deep well pumps and center pivots and serve as an additional source of income.

“I can tell you that we’re definitely going to be installing more center pivots,” Gayle sums up. “As you can guess, all indications are they will be T-Ls.” 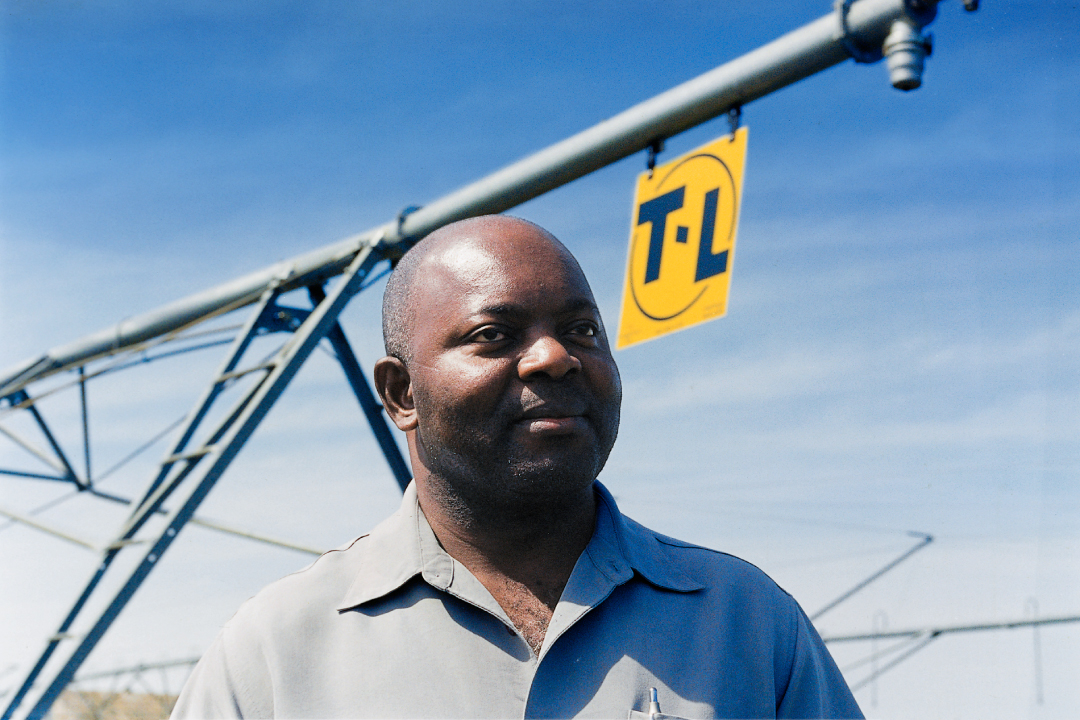