Adairville, Kentucky
Back to Testimonials

"What really caught my eye was seeing that his T-Ls didn’t need electric motors out there on each wheel unit."

Joel Armistead has lots of proof that a center pivot irrigation system can have just as much value to a farmer east of the Mississippi River as one further west and just wait until he has some more experience under his belt.

While Armistead couldn’t foresee that the 2008 growing season would be as hot and dry as the previous year, it was a good thing that he decided not to take chances.

By corn planting time on his Adairville, Kentucky, farm, a T-L center pivot on a ten-year lease was installed to provide dependable moisture on 125 acres. This was to be his first experience with irrigation.

From mid-June to the last of August his T-L racked up 448 hours of operation, sometimes applying 3/4-inch each time around, but most circles were set at 3/10- inch to lessen water run-off from the rolling portion of the field. Incidentally, due to a power pole’s location, Armistead’s unit has to be reversed rather than completing a full circle.

The bottom line, by any measure, is written in black ink.

Armistead’s entire T-L irrigated circle averaged 264 bushels of corn an acre. His certified acreage entry for the National Corn Growing contest went through his combine at a 305.9 bushels an acre rate.

How outstanding a yield this was and how irrigation came through for him is illustrated by the 80 bushels an acre the dryland corn in the same field averaged previously.

His top dryland yield from a nearby bottomland field averaged 140 bushels an acre. Hurt by abnormally hot and dry weather, his overall dryland corn average was a bare 113 bushels an acre in 2008.

Another impressive statistic is that an irrigated acre netted him $544.33 more profit per acre than the dryland. For the 125 acres, that is $68,041.25 more total profit!

His new T-L allowed Armistead to gain some managerial tweaks that otherwise wouldn’t have been possible, as well.

First, he was able to save the $10 to $12 an acre cost for an airplane to apply insecticide and fungicide by injecting them through his pivot system instead.

Second, he also made three eight- gallon applications of liquid nitrogen mixed in the irrigation water fertigation. Incidentally, at 255 units an acre, his nitrogen application in the circle was less than a pound per bushel harvested.

Armistead initially had decided on an electrically powered center pivot sprinkler system as his solution to coping with a drought year. However, as he explains, “It’s kind of scary to think of water and electricity being together. I’d also talked to electric system users who told me about the troubles a thunderstorm can cause.

“So, I explored on the Internet to see if there was a system not run by electricity. I found the T-L site, and read all the customer interviews.”

“Then,” he adds, “the final touch was when I found there was a T-L dealer within 20 miles of me who was really helpful in my first year of irrigating.”

Armistead says he’s much more familiar with hydraulics than high voltage electricity. For example, when he raises up the side shield of his combine he views a multitude of hydraulic lines, all operating at much higher pressures than his T-L sprinkler.

“But, what really caught my eye was seeing that his T-Ls didn’t need electric motors out there on each wheel unit,” he continues.

“It looked like the T-Ls also had their wheel spaced for more stability. Their operation is simple when using all the basic controls. To me, a T-L is the safest and simplest center pivot available,” Armistead says.

“I’m happy with my T-L—and I’ve already ordered a second T-L center pivot for next summer!” 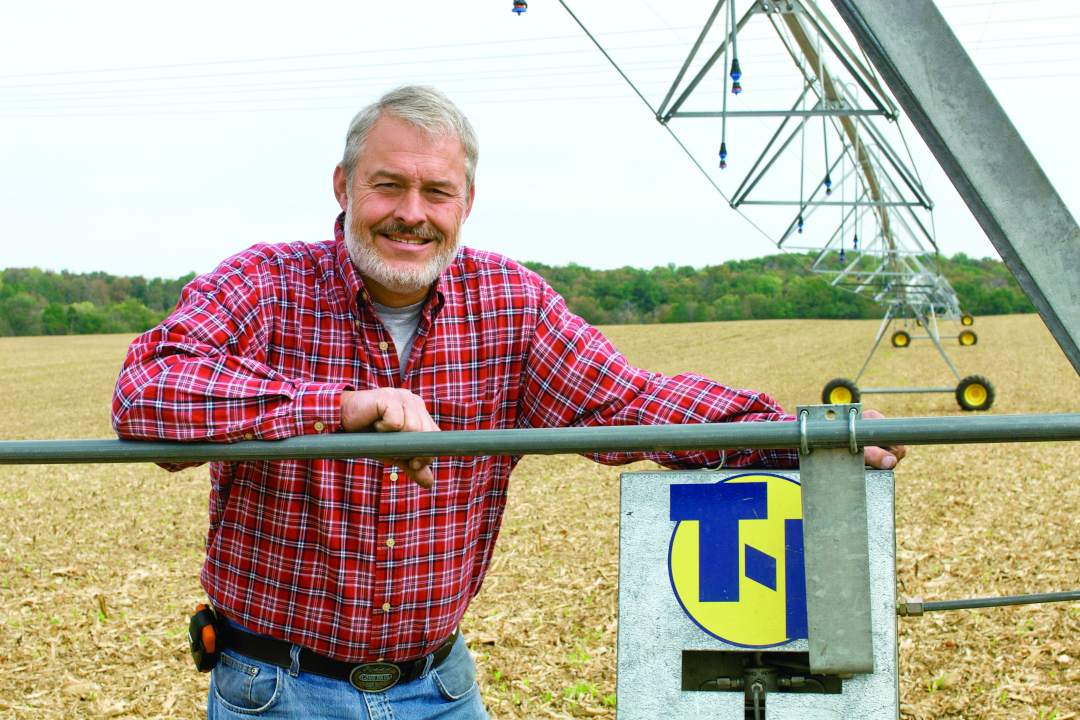