Ropesville, Texas
Back to Testimonials

"The main reason I went with T-L was I could take care of servicing and repairing them myself. Some of the farmers I talked to had to wait for four or five days with a down pivot for an electrician to arrive."

Because a day of downtime can ruin a cotton crop, Joe Rhoads in Ropesville, Texas, decided that he’d play it cautious when he purchased his first center pivots in 1991, a pair of T-Ls.

“I bought two gearboxes and stuck them in the barn so if I needed quick repairs I’d have them handy,” he remembers. “After 14 seasons, those two replacement gearboxes are still in the barn.

“Now I have eight T-Ls, and they all still look like new,” he adds. “So far, I’ve never had to call anyone out of town to fix anything. Also, we try to farm more acres per person than most farmers, and so we just don’t have time for systems that don’t work.”

Realizing back then that he needed to vastly improve his watering efficiency due to a decreasing aquifer, Rhoades decided center pivots were the answer. But, which brand to buy?

To benefit from the experience of other farmers, he drove more than 100 miles talking to center pivot users and getting their recommendations.

He even talked to a trucker who told him that, due to their greater weight, three T-Ls put him over his weight limit. He said he could easily haul three of another brand. Rhoades also says he’s never heard of a T-L being blown over in a strong Texas straight wind, but knew of several instances of this happening with other brands.

“The final clincher was that I read in the paper about a farmer being found dead by his electric center pivot,” Rhoades says, “I have four sons and the man who works for me has five sons. An electric system just wasn’t worth the risk.

“However, the main reason I went with T-L was I could take care of servicing and repairing them myself,” he continues. “Some of the farmers I talked to had to wait for four or five days with a down pivot for an electrician to arrive.”

Rhoades quickly learned about the difference in efficiency between row watering and center pivot irrigation. In a side-by-side comparison of two cotton fields, one watered with an eight inch surge system and the other with a T-L center pivot, “Both ran the same gallons per minute per acre,” he reports. “The row watered field made 601 pounds an acre and the T-L field made 1,051 pounds,”

He concluded that his ability to put water on so the cotton was never stressed made the difference. The T-L could give a little drink twice a week, while it took almost a month to get across the row watered field

To minimize evaporation today, Rhoades utilizes drag hoses that deliver a wet strip 20 inches wide down the middle of every other furrow. This concentrates the water and eliminates 75 percent of the evaporation area.

“I could have bought cheaper systems,” he observes, “But, I believe you get what you pay for. I felt then, and still do today, that T-Ls are worth any extra cost.”

Bob Faver farms near Dalhart, Texas, where for the last five years rainfall has been roughly a third of the normal 12 to 14 inches annual average. He says his number one reason for liking his T-Ls is, “The continuous movement that’s not offered by an electric center pivot. For some crops this is a big issue. Plus, without all that starting and stopping there’s less wear and tear on the machine.

“It’s just a ballpark guess, but I’d say my T-Ls are surely 20 percent less trouble than my electrics.” He comments that while his ten year old T-Ls will eventually need some refurbishing, this will be mostly replacing hoses and probably little else.

“The structure of the T-L machine is excellent. It will be there a long time,” he says. The T-L is a good quality product. About all we have to do before every season is change filters, make sure the gearboxes are full, and check for leaks, and then go.” On the other hand, his electrics always seem to have a switch or a motor that’s bad, he notes.

“The nice thing about hydraulics is that I can fi x any problem myself. That’s not the case with an electric system. I’ve never been comfortable with electricity either,” Faver adds. “If you’re just not thinking one time, then you could be dead.”

Now in his fifth year of all no-till, Rhoads recalls what finally prompted his decision. Frowning as he spoke he said, “After going across the cotton 13 times fighting sand, working seven days a week, dog tired, we still ended up losing our crop. We knew we had to do something to get some ground cover.”

After his first year of no-till farming, he thought a 3 inch rain had completely missed his cotton fi eld since he saw water running off his neighbor’s land and not his. In his view, this was an excellent illustration of no-till effectiveness. The water was actually being retained in his field. 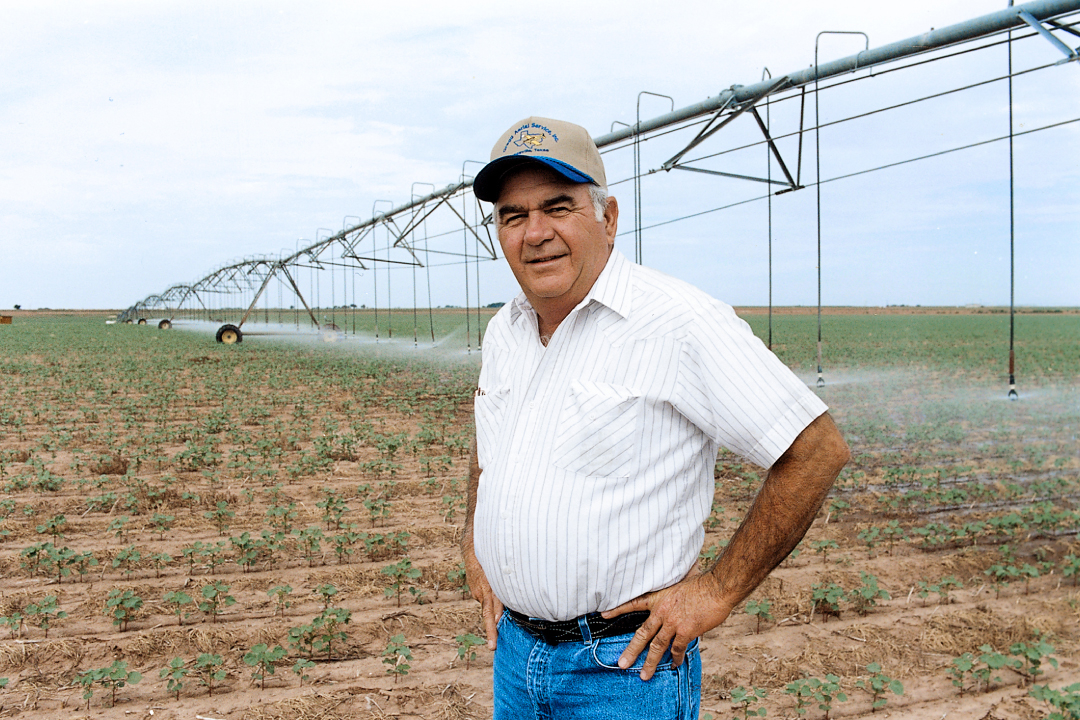