Bowling Green, Kentucky
Back to Testimonials

“Plus, I like the idea of hydraulic drive. I’ve always been under the impression that electricity and water make for a bad combination.”

It’s always been said that, “When life gives you lemons, make lemonade.” That was certainly the case a few years ago for Joe Neal Ballance, who operates Triple Oaks Farms near Bowling Green, Kentucky, with his son Neal, a brother and a nephew. Together, the family manages a little over 10,000 acres of corn, wheat and soybeans that are double cropped behind the wheat.

“We’d been on a natural gas search, drilling wells on our property in hopes of finding a natural gas pocket that would help us cut down on the cost of grain drying,” Ballance recalls. “However, in one of those wells, we ran into water that the driller said was in much greater quantity than he had run across in several years. So that got us kind of excited about putting in some pivots, especially after we had experienced such a crop loss during the 2012 drought in this area.”

Consequently, Ballance says they took some of the crop insurance money from that year’s loss and purchased several T-L center pivot units. Even though much of the crop was considered a loss, corn prices were high that year, which meant the insurance payment was better than average.

“So, instead of competing for more land and paying these high-priced leases in our area, we decided we would invest in irrigation and try to improve our own land, while providing some insurance against another drought,” he explains.

“Consequently, we put in eight pivots that first year. We also chose to go with T-L pivots, mainly because of Ken Moore, who is the local dealer. We have a couple neighbors who have T-L pivots and they’ve been very happy with them. I also have a friend who had bought a farm that had a couple of electric pivots on it and he said he much preferred the T-L pivots with hydraulic drive and commented that he got better service from the T-L dealer. So that’s why we went the way we did.

“Being totally new to center pivot irrigation myself, I wanted a dealer like Ken and R & K Pivots, which is only about 20 miles away, that I could call anytime I have a problem,” he adds. “Plus, I like the idea of hydraulic drive. I’ve always been under the impression that electricity and water make for a bad combination.”

Unfortunately, central Kentucky doesn’t have aquifers into which farmers can tap for a water supply, which meant that Ballance had to improvise in a few cases to get enough water to supply the pivots.

“We’re solid rock at 20 to 40 feet, and in some places, just 10 feet down,” he explains. “So, we’re looking for that underground cave or stream that we can tap into; and that can be pretty hard to find at times,” he adds, noting that the driller actually pulled up a crawfish from one well.

Moreover, most of the wells can only pump for 12 to 24 hours without having to replenish for several hours to again reach capacity. Hence, the solution for Ballance has been to establish or enlarge a pond or lake to serve as a reservoir for low-producing wells and rainfall runoff. The most recent addition was a 14-acre pond that was dug last year to supply three different pivots. As a result, he can put on more water than most wells can sustain at a time when it is needed most.

“The reason we put in such a large lake this last time is the pivots aren’t near any creek or river and the nearest well is only capable of producing around 500 gallons per minute,” he says. “We have some wells that produce 500 gallons and some that produce up to 800 gallons per minute or more. However, by storing rainfall and well water that we’ve pumped into the lake, we can put five inches of water on 200 acres or more in a short period of time if necessary.”

In the short amount of time the family has used center pivot irrigation, Ballance says he has already seen corn yields increase by as much as 100 to 120 bushels per acre, despite limited availability of water.

“Our soils don’t have a lot of water-holding capacity,” Ballance explains. “We need rain every week to 10 days to grow a good corn crop. Yet, I’ve seen 95-degree days around the first of July; and that can really have an impact on the crop if you’re a week behind on rainfall. That’s when irrigation makes a difference, even if you only put on four or five inches of water per season. Being able to give the crop that moisture when the ear is starting to form and fill is critical.

“We’re still doing things to increase the availability of water,” he says, noting that T-L pivots only cover about 10 percent of the farm’s tillable acres. “And we plan to add more pivots as we develop water sources.

“Unfortunately, I think too many farmers have the attitude that irrigation is something that you would only want to consider when corn prices are high … like when it was $6 to $7 a bushel,” Ballance adds. “My opinion, though, is that we need that revenue stream and yield guarantee a lot more when corn is $3.50 or $4.00 per bushel than we do when the price is at those higher levels.

“That’s why we’re still trying to climb that ladder that leads to consistently higher yields.” 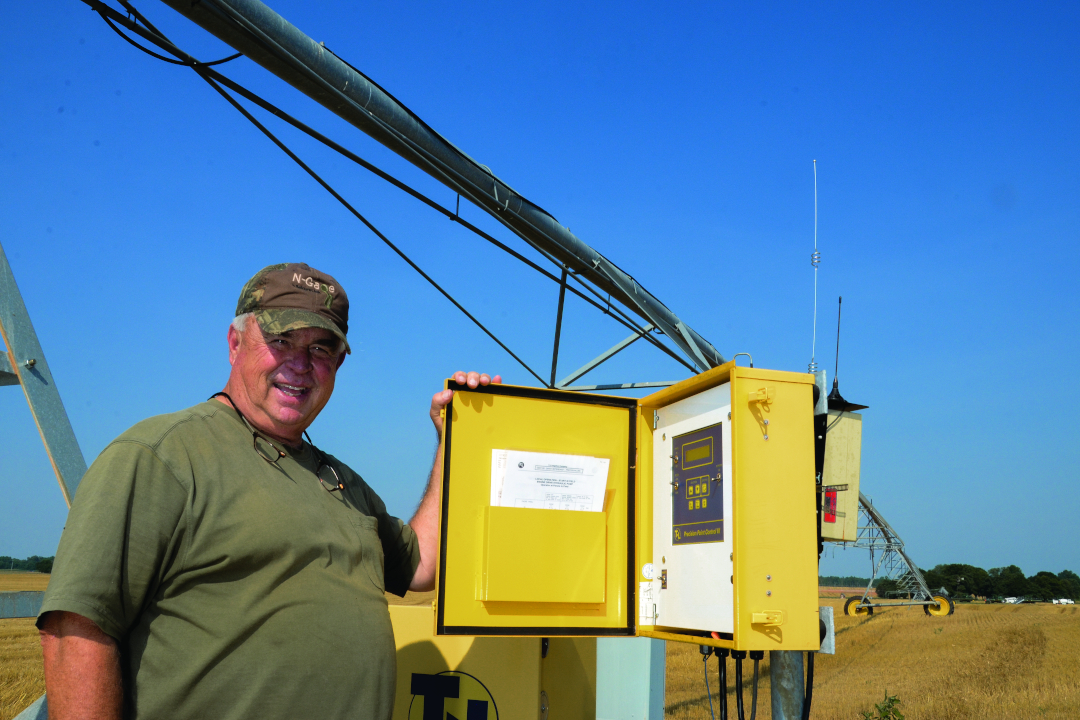