Allendale, Illinois
Back to Testimonials

"You can ask how many electric pivots have we have replaced with T-L systems and get a quick answer, all we can!"

Brothers Jim and John Stevens utilize ten T-L and eight electric center pivot sprinkler systems on their 4,000-acre farm near Allendale, Illinois. Their first experience with irrigation goes back 20 years when a new piece of land came equipped with an electric pivot system.

“After about the second year of acquiring more land and irrigating we began adding T-Ls,” Jim points out. “You can ask how many electric pivots have we have replaced with T-L systems and get a quick answer, all we can!”

“Service was a big reason and safety was a factor, too,” John adds. “Now, of course, there’s also the copper wire theft problem. There’s no copper wire on a T-L as there is with every electric pivot system.”

Stealing copper wire from electric center pivots is unfortunately what they term “common” in their area now. Many of their neighbors have been hit, some twice on the same system.

The Stevens have only suffered one loss so far, which they regard as one too many. This electric pivot system was located right by a highway, too. When tile installers attempted to move it last fall they immediately reported, “We can’t move the pivot. The wiring’s gone.”

The thieves had cut the wire into five-foot lengths, then rolled it up and secured the roll with duct tape. The Stevens know this, because one roll was left behind. The brothers say they intend to keep it as a “souvenir”.

To prevent further thefts they’re following a two-step program, banding the copper wiring more securely onto their other electric pivots making it more difficult to remove and replacing electric pivot systems with T-Ls since they don’t require any copper wire to operate.

“A T-L pivot definitely pays off pretty well,” Jim believes. “It depends on the soil type, but we feel the T-L system will pay off in three or four years. And, in dry times, that’s probably more like two years.”

“Irrigation has also allowed us to double-crop beans and wheat and pretty much guarantee us crops.Irrigation has definitely increased the productivity of our farm ground.”

Since most maintenance and repair work is done by family members, safety is one of their main considerations. As John says, “With T-Ls we don’t have to be worried about anybody being electrocuted.”

“We’ve not had many problems with our T-L systems,” he continues, “it’s usually an engine’s shut down or an old tire that’s gone flat. Over the years we’ve had to replace only three gearboxes.”

In the long run there’s less maintenance with a T-L since it’s stronger and it’s simple to operate. “There’s a lot more maintenance on an electric system,” his brother agrees.

The Stevens brothers also appreciate the built-in hydraulic jacks on their tow able T-Ls. “By running one pivot on two circles, it halves our investment. We can get a towable T-L moved in an hour or so,” Jim says.

“We also have a tow able electric system, but we don’t tow it anymore since it always falls off the jack a time or two and therefor takes longer to move. We finally moved it to where we could just leave it, since moving it wasn’t worth the effort,” Jim says. “We think our T-Ls are great!” 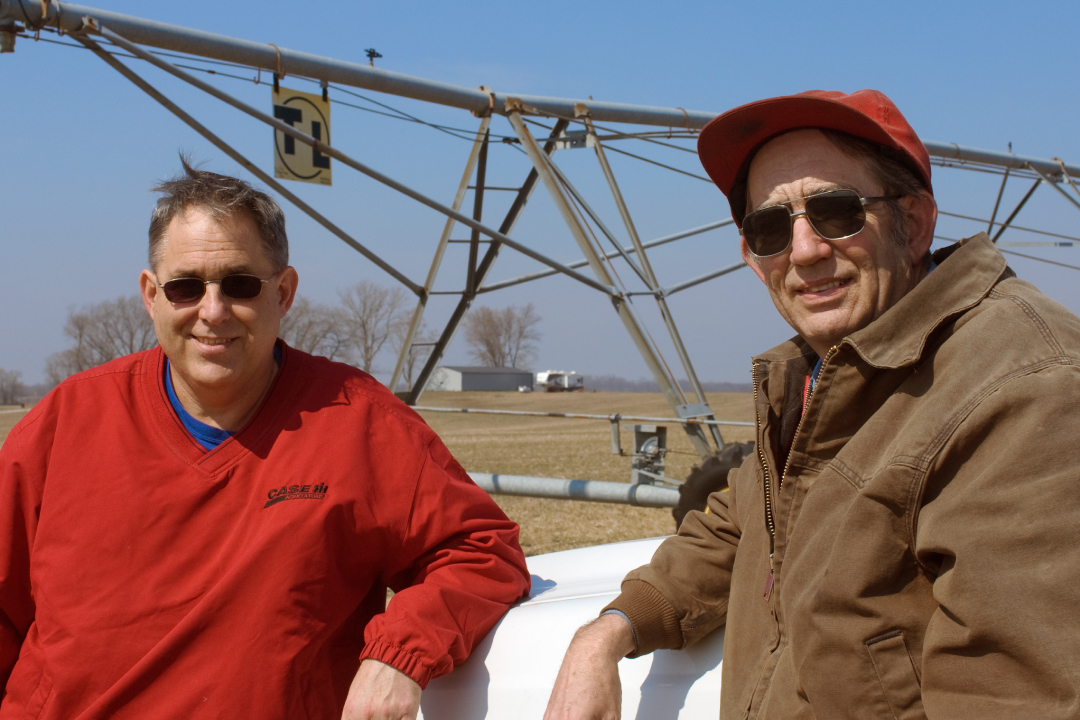