Floydada, Texas
Back to Testimonials

"My T-L will maximize our water with precise watering techniques."

Having received only two inches of rain since September, Jaron Everett’s dry land cotton plants hadn’t yet seen blue sky by early June, 2006. He now irrigates 90 percent of his 1,100 acres with T-L pivots. That doesn’t include the 600 acres of cotton he usually plants into milo stubble under minimum-till, ridge-till near Floydada, Texas.

“If all I had was dry land, even in a normal rainfall year, it would take approximately 4,000 acres in order to harvest the same amount of cotton,” he points out. In 2006, he began irrigating with a new T-L pivot as a supplement to row irrigation and a “Spark-O-Matic” center pivot that he refuses to claim.

Everett continues, noting that the T-L is nozzled for just 300 gallons a minute fed from two wells. Under row irrigation that same setup could water only eight rows at a time, and a maximum of 75 acres.

“Now, my T-L waters 125 acres more efficiently, without too much water here and too little water there,” he explains. “Basically, it’s allowed me to irrigate another 50 acres with the same amount of water.”

However, one thing Everett didn’t count on before he began utilizing center pivot sprinklers was more family time. He’s a single dad, and getting home at 2 a.m. or 3 a.m. every day due to row irrigation labor needs just wasn’t working for him.

“Yes, my T-L has knocked down my stress level, but I’d always heard that the T-L was the Cadillac of all sprinklers,” says Everett. “When I went to look at center pivots, I could tell by how they were designed that T-L was the best. Its cost doesn’t matter when I think about what my T-L has saved me in time, frustration, water, and money compared to row irrigation.”

After a summer comparing his T-L to an electric center pivot, Everett was also convinced that, “My T-L is going to cover more acres with less water than the electric. I found my cotton was more evenly watered with the T-L, too. It placed the water exactly where it needed to be–I call it ‘precise irrigation’.”

He attributes this to the T-L’s continuous movement. There’s no repeated starting and stopping so that some areas get more or less water than other areas in the field. This past spring he learned that the T-L’s pre-watering moisture was consistent in the beds, while the electric system’s wasn’t, as evidenced by the dry/wet spots.

“That’s not the only problem with an electric system,” Everett points out. First, he considers the electricity factor “really scary.”

“It also seems I’m always having to call the service man to come out to fix fuses or micro switches or one of those little U-joints or something,” he says. “Its high maintenance costs are killing me. It takes hours, sometimes days, to get parts, too. I think with an electric center pivot, you need to be a certified electrician to work on them. That’s not my job. My job is to farm. With a T-L, all it takes is a little common sense and a few minutes if you understand hydraulics. Also, I’m not afraid to climb on it to check something out or to make adjustments as I am with the electric.”

He says he considers it mandatory to check his electric center pivot at least twice a day, since it has so many moving parts and electric motors and micro switches. On the other hand, he looks at his T-L just once daily, and observes that, “I’ve never come out to the field and found that it’s not been working.”

If Everett needed another reason to prefer T-L pivots, it’s the fact that the water table in his region continues to recede. As a result, row irrigation doesn’t allow enough acres to be covered with the available wells, nor can the needed yields of cotton be harvested.

“We need to maximize our water with precise watering techniques,” he believes. “My T-L will exactly do that. With the old ‘row water’ techniques pounding at profits, we farmers can’t afford not to use center pivot irrigation if we want to stay in business.

“Water timing is key to making a cotton crop under my T-L,” Everett sums up. “I can’t say enough about my T-L.” 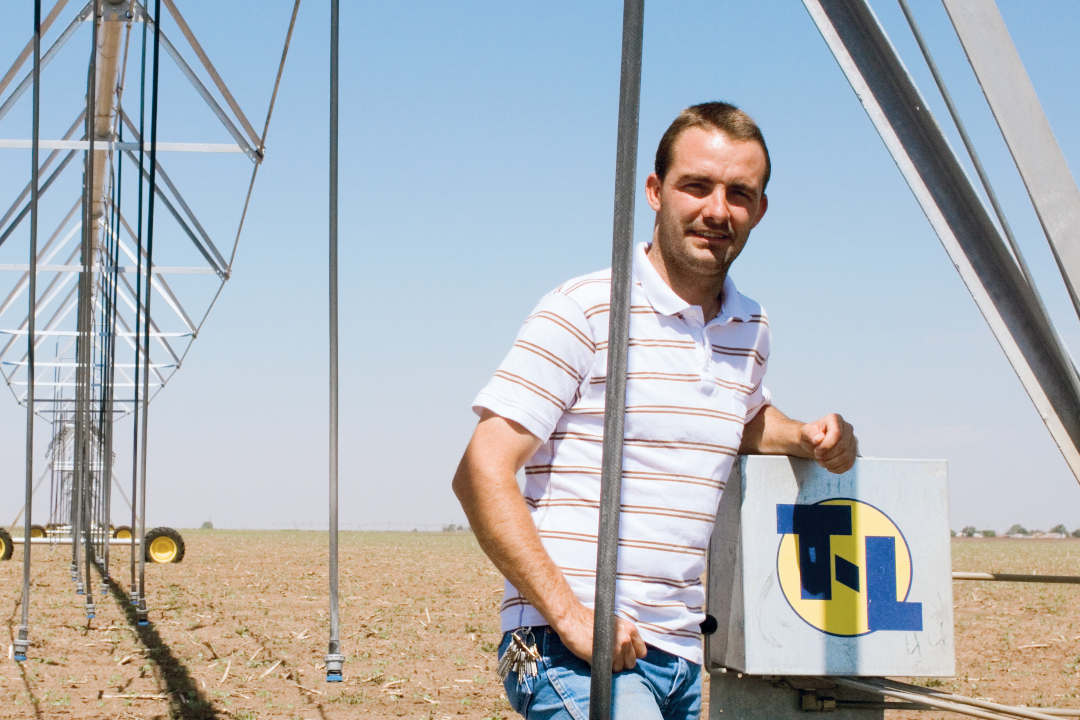