Dukedom, Tennessee
Back to Testimonials

"With our terrain, we also felt like the continuous movement of T-L's hydraulic drive would be better suited to our application. The fields where we have pivots aren't that steep, but we do have a lot of rolling terrain and we just liked the idea that the pivots aren't stopping and starting every few feet."

Like most North American farmers, James and Jason Yarbro are continually looking for ways they can increase crop production without adding more land to the operation. It’s not that they’re opposed to adding more acreage, particularly since their sons, Addison (James’s son) and Caleb (Jason’s son) have joined the operation full time.

But, as everyone knows, the more you can produce on a given investment, the greater the profit. That’s the main reason they’ve gone from zero acres under irrigation to 345 pivot-irrigated acres in just two years time. Based near Dukedom, Tennessee, Yarbro Farms already encompasses approximately 9,500 acres that is generally divided between corn and soybeans, with a little bit of wheat added to the mix.

“I think we’re all looking for ways we can produce more bushels per acre, no matter what the crop,” says James. “So we’re just trying to maximize our potential. Unfortunately, we have so many small fields, it’s hard to put a pivot on very many acres. It doesn’t help that a river snakes through part of the farm, cutting it into odd- shaped parcels.”

However, it appears that the five T-L center pivot units Yarbro Farms have already installed were put in just in time. Due to the severe drought across the Midwest in 2012, James says their dryland corn yielded anywhere from zero to 70 bushels per acre, while the corn under the pivots yielded around 200 bushels or better.

“One of them currently covers about 100 acres, but can do 125, once we clear out some brush and timber,” James explains. “Two more cover about 72 acres each; but one of those could cover more, too, if we can make a deal with a neighboring farmer. The last two are both in the same field and cover about 100 acres combined,” he continues. “So we currently have just one that is making a full circle, but we hope to have two more making a full circle by next year.”

In the meantime, James says they continue to look at fields where they can add more T-L pivots in the coming years.

“Last year was a good year, which meant there wasn’t a lot of difference between our dryland corn and the irrigated corn,” Jason relates. “We had plenty of rainfall and averaged around 200 over the whole farm. However, we felt like the irrigated ground would have done even better had we not been almost a month late in getting it planted.

“That certainly hasn’t been the case this year,” he adds, noting that the pivots ran almost continually from early June through July 6. “Without irrigation, our total yields would be even worse than they are now.” One thing that has helped, the Yarbros believe, is the no-till program that they adopted on the majority of their acres to control erosion and conserve moisture. Over the past few years, the family has also increased their use of GPS-based technology … including variable-rate fertilizer, variable-rate lime applications and, most recently, variable-rate seeding.

“That is something irrigation has pushed us to do even more of,” Jason relates. “A significant portion of our corn is already variable-rate seeded based on soil type, contour, yield potential, etc. But we hope to be at 100 percent variable-rate in just a couple more years.

“We’re already using the variable-rate controller to plant a lower plant population on the corners and bumping it up where we’re under the pivots,” he adds. “Plus, we’ve implemented it on the fields with the greatest amount of variation. Now, we’re trying to expand it to the rest of the farm.

“One thing that’s helped is we’ve been working with a good friend who is an agronomist with Pioneer,” James adds. “He’s been running some pretty extensive tests — including some on our own farm — to learn how different varieties perform on different soil types in our area. So we’ve been using that as a parameter to overlay soil type maps with our yield maps to arrive at where we think we need to be.” Coincidentally, it was another friend who turned the Yarbros onto T-L pivots.

“Our John Deere dealer happens to be a dealer for a popular brand of electric pivots,” James adds. “But we just felt like the hydraulic drive was a superior system. As farmers, we’re also more comfortable with hydraulics than we are with electricity. We think they’ll take less maintenance and be more reliable in the long run,” he adds, noting that that has already been the case, even though the oldest system is only two years old.

“With our terrain, we also felt like the continuous movement of T-L’s hydraulic drive would be better suited to our application,” Jason adds. “The fields where we have pivots aren’t that steep, but we do have a lot of rolling terrain and we just liked the idea that the pivots aren’t stopping and starting every few feet.”

The challenge now will be financing one or two more T-L units following a year of drought and poor crop production. However, considering the yields on fields without irrigation this past season, the Yarbros wonder if they can afford not to put more fields under a pivot. It seems that their plan for boosting yields has suddenly turned into crop insurance. 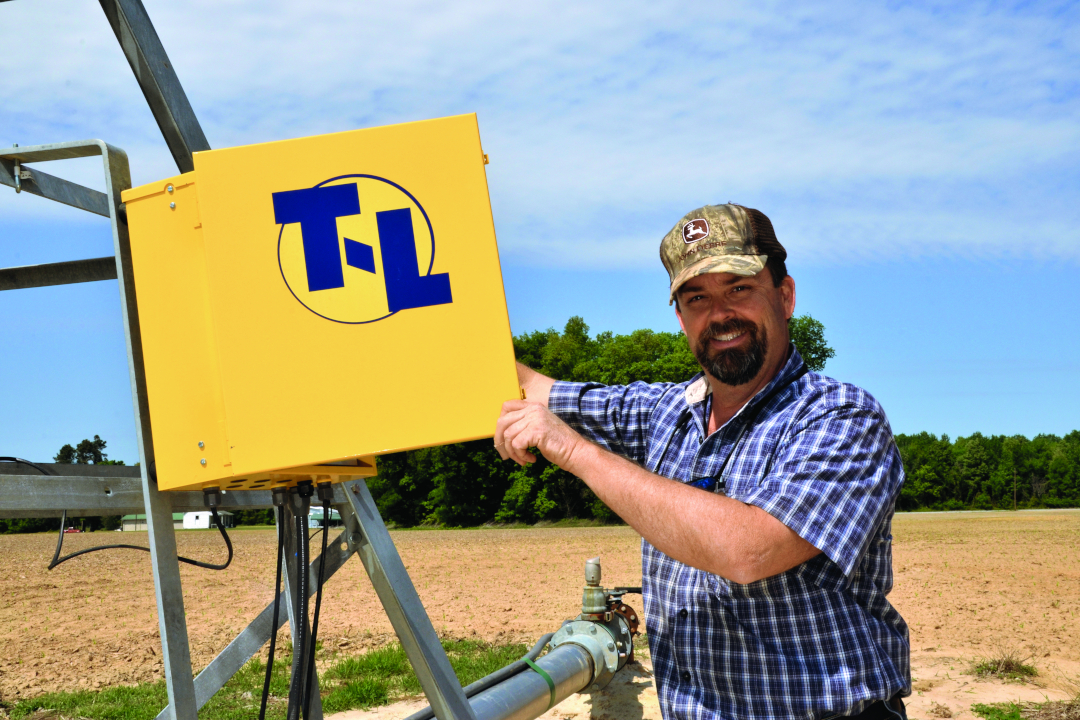