Saudi Arabia
Back to Testimonials

"While these units require ongoing maintenance, they have performed remarkably well considering the operating conditions and the fact that these machines have been in operation for 32 years."

It’s probably a good thing that the center pivot irrigation systems that Jack King manages for his employer are located in the Kingdom of Saudi Arabia (KSA) and not in North America. Since most of the pumps are powered by 12-cylinder Cat(R) diesel engines that consume up to 24 gallons per hour, the venture would likely be cost prohibitive in the U.S.

However, according to King, who serves as agriculture manager for Nofa Equestrian Resort in Tebrak, Riyadh, KSA, and is locally known as JK, diesel fuel sells for just 21 hallas per liter, or about 20 1/2 U. S. cents per gallon.

King notes that while the area was originally developed during the late 1970s and early ’80s to produce wheat for the Saudi government, the crop mix has since changed to forage — primarily alfalfa, Rhodes grass and corn silage — for sale to local dairy farms and to the nearby camel and sheep owners.

According to King, wheat was highly subsidized at the time the first T-L pivots were installed, with the price approaching 3,000 SAR/ ton ($795 US/ton). However, that only lasted a year, with the price soon dropping to 2,500 SAR ($663/ ton). After two more price drops, it’s now selling for about 1,000 SAR/ ton ($265), which is less than the margin that can be achieved from forage crops, even though alfalfa and Rhode grass sell for about the same price.

Today, most of the farm’s forage sales are to local dairies or to camel and sheep farms.

“This is mostly a cash sale business whereby locals visit our projects on a daily basis and purchase anywhere from one bale in a Toyota pickup to several truck loads of bales on a cash basis,” JK relates. “Most of the Rhodes hay is sold on a per bale basis, while some is contracted to local dairies on a per ton basis.”

Of course, it doesn’t take a geography major to know that very little grows in Saudi Arabia without irrigation. Of the 60 center pivot machines that cover the farm, half of them are T-L units that replaced older Pringle electric-drive systems more than 30 years ago. Most of the pivots, King explains, cover between 50 and 60 hectares (124 – 148 acres), even though some are as small as 40 hectares (99 acres) and as large as 90 hectares (222 acres). The farm also has three electric-drive linear systems that range between 100 and 200 acres (247 – 494 acres).

“Most of the irrigation water in KSA tends to be corrosive, hence it was necessary to replace the main pipes back in the late eighties,” he adds. Rather than replacing with galvanized steel pipes, however, Randy George, the vice-president of international sales for T-L, installed PVC pipes under the main pipes, while working with us here in KSA. This method was adopted broadly throughout KSA and has proved highly successful. Of course, nowadays there are other options from T-L, including poly pipe and other forms of pipe coating to counter corrosion.

“There is no doubt that T-L pivots are a quality brand and well engineered,” JK continues. “In 2011, T-L representatives Randy George and one of his maintenance engineers visited KSA and spent some time at our operational base and conducted training seminars that concentrated mostly on the powered components of the pivots as these were the areas where we were experiencing the most difficulty and incurring the most cost. As a result, there has been an improvement in relation to maintenance costs and overall reliability of the machines.”

King says they have had similar training seminars in the past, but due to the amount of employee turnover, there has been a greater loss of knowledge and experience than “would normally be expected in Europe or the U.S.”

On the other hand, King says he and his staff have learned to be pretty self-sufficient. They have developed their own laboratories, for example, where they can conduct all their own soil, water, forage and tissue analysis. They also developed a continuous no-till cropping program on all irrigated areas, which consists for two years of alfalfa, followed by Rhodes grass for two to three years.

“In the case of corn silage we will typically produce two corn silage crops over the summer months followed with alfalfa or Rhodes grass,” JK explains. “High production is the key to success in this business, as most of our other costs don’t vary much year to year.”

When your farm is located in the sands of Saudi Arabia, that means having center pivot irrigation systems that are not only productive, but reliable year in and year out. 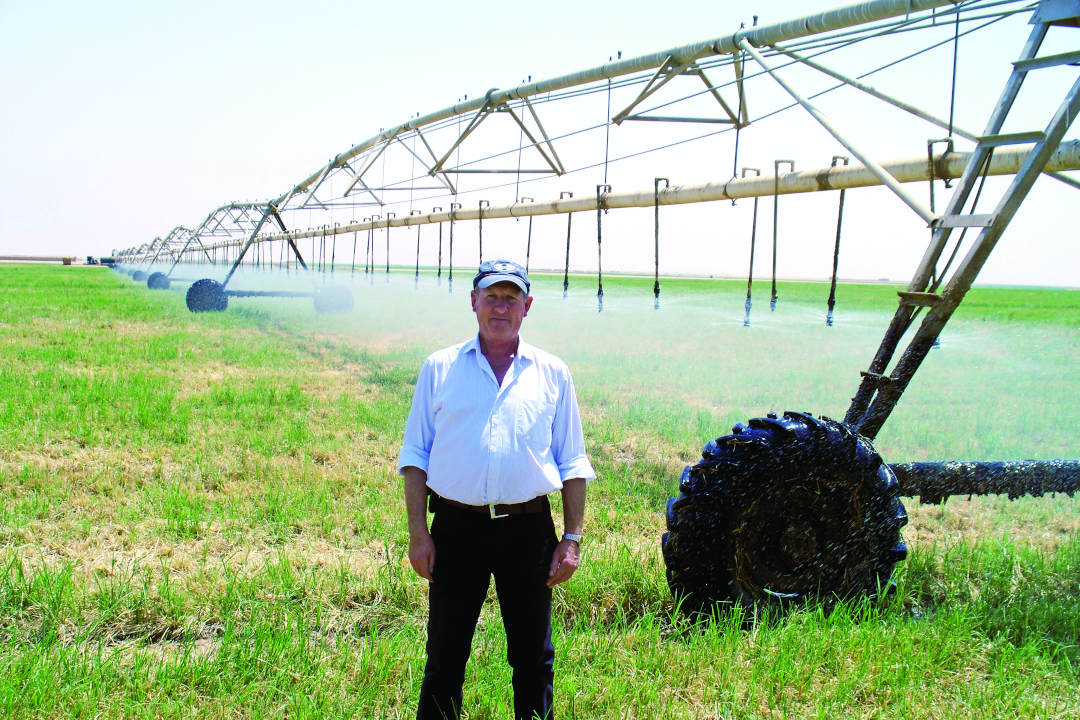