Branchville, South Carolina
Back to Testimonials

"One of my neighbors runs all different brands of sprinklers however, since he's seen the T-Ls work, I think we've got him converted."

Although his annual rainfall is in theory more than adequate to produce good crops, the problem is that it doesn’t always arrive when needed. And, some years are just simply dry, according to Harry Wimberly.

His 1,500-acre Wimco Farms is near Branchville, South Carolina. Just as soon as he could acquire enough land in one plot with space enough to install a center pivot, he bought a T-L system four years ago.

“The advantages of irrigation are so obvious,” he adds. “It’s as different as day and night where the T-L’s water stops.”

The year his T-L was making its first circles was really dry. Yet the yield under it was so much better than his other corn, without supplemental irrigation, that Wimberly figures his center pivot paid for itself in just its first season.

In addition to the center pivot’s 100 acre coverage, he next installed an 85 acre T-L lateral system. With dual end guns it waters a narrow field that’s 6,400 feet long and 740-foot wide and that exhibits a definite curve.

“I was amazed, but this lateral will walk around the corner. Keep the furrow cleaned out and it will go wherever I want it to go. In fact,” Wimberly smiles, “I think it would go around the world if it just had a track to follow.”

What first appealed to him about T-Ls was that, “They’re the simplest piece of equipment that I could possibly run. Everything runs off one diesel engine, so I don’t have to worry about electric motors, shorts, or lightning storms, or only rarely getting out line.”

On the other hand, Wimberly points out that the worst that can happen with a T-L is to have a hydraulic line break. He hasn’t had that problem yet.

He says if he does it will be a whole lot easier to spot an oil leak than to attempt to trace an electrical short. He emphasizes, “Simplicity. I’ll say that word again: A T-L is just a simple machine to operate.”

This also means, he says, that T-L’s are so easy to run that he can send almost anybody down to either of his units to push the button that cranks up an engine and immediately start irrigating.

“One of my neighbors runs all different brands of sprinklers,” Wimberly comments. “However, since he’s seen the T-Ls work, I think we’ve got him converted.”

His farming philosophy is: 1. If you have a field big enough to install a center pivot, do it. 2. Make that center pivot system a T-L.

“We’re all out here to make a profit, since without profit we wouldn’t stay in business,” Wimberly says. “But, there’s also that feeling of accomplishing something, the pride of self achievement. That’s another benefit of having an irrigation system that just makes farming a little more pleasurable.”

Talk about varied center pivot experience! Pinckney Thompson operates 20 systems of four different brands, covering from 47 to 300 acres that were installed between 1978 and 2001.

Half of his 5,000 acres at Vance, South Carolina, are irrigated. According to Thompson, it’s because, “It’s like life or death, whether you stay in business or not. For any kind of consistency we have to irrigate.”

And yes, the last two pivots set up were T-L towables for several reasons. First, it was more economical to drill one well and run multiple sites, thus spreading out the cost of the well and pump. Second, his neighbors who had towable center pivots of other brands always told him how difficult they were to move.

Thanks to diesel engines, the T-Ls helped the budget since he didn’t have to run any wire. And, Thompson says he and two men can move a T-L from circle to circle in just 40 minutes.

This year, for example, the T-Ls were in corn fi rst, then towed over to water herbicide in peanuts, then it was back to irrigate corn until mature, and finally to the peanut field again.

Basically, according to Thompson, he’s getting the equivalent of two center pivots for the price of one.

“I had aerial photographs taken of all my center pivot fields two years ago,” Thompson reports. “I could see a difference between corn under our continuous movement T-Ls and corn under the stop start electric center pivots. The corn was just more uniform in the T-L circles.

“Usually better uniformity results in higher yields,” he adds. “I don’t know if I can pinpoint an exact yield advantage for the T-Ls, but I estimate it would be another five to six bushels an acre.”

Thompson says that, “My other 18 center pivots operate on 480 volts. The employees and I respect that, but when it’s not there, like on the T-Ls, it makes working much nicer. Also, with every lightning storm I just cross my fingers that I won’t have to replace a bunch of wires.”

In the last three years he’s had to replace wiring, up to two miles long in some instances, vital to his various electric units–at a cost of $30,000.

That, of course, will never be a future expense for his T-Ls. So far, in three years Thompson says he’s spent less than $50 on both systems.

In his shop, Thompson stockpiles a pallet of gearboxes for his electric systems. On hand for his T-Ls: One five gallon bucket of oil.

The first start up in the spring also differs between the electrics and his T-Ls. As he says, “Due to dirt daubers or water condensation, we usually spend the next three weeks fixing the electric systems. With the T-Ls, though, all we’re dealing with is a diesel engine turning a hydraulic pump. We just fire them up and let them run.”

As for the economics of irrigation itself, Thompson says that he can usually make the payment on an irrigation system and still have as much money left over as he would from a decent dryland year. Harry Wimberly 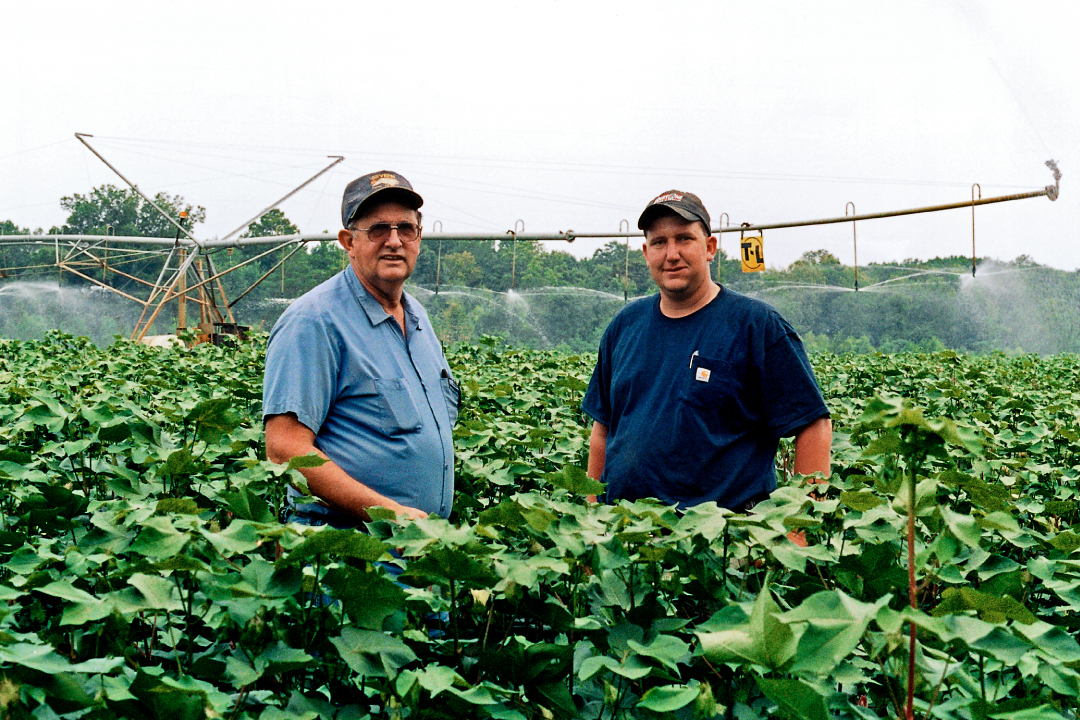