West Point, Nebraska
Back to Testimonials

"Anything we buy in the future will be a T-L"

When Greg Kreikemeier says, “Anything we buy in the future will be a T-L,” he has what he’s convinced are solid reasons. He’s in charge of the 4,000- acre crop side of Kreikemeier Ag, Inc. outside of West Point, Nebraska, that’s 60 percent corn.

His brother, Jason, handles their 3,000 head feed yard. 500 to 900 pounders at purchase, depending on the market, are turned two to three times a year.

60 percent of the cropland is irrigated. Six of the 19 center pivots operated are T-Ls, so he has a lot of comparison experience with the electrics with which they started back in 1982.

“Overall,” he points out, “maintenance on the T-Ls is so much easier. We just check the gear box grease, and that’s generally it.”

“They’re a simple system to operate and maintain, as well. A farmer can walk up to a T-L and quickly see if anything is wrong. It won’t require an electrician to figure it out.”

“And, the T-L panels are simple, and not complicated. Regardless, we just haven’t had much trouble with our T-Ls.”

Kreikemeier also likes that there are only two gear boxes versus three gear boxes as on each electric tower. On their electric systems the contacts have become a problem. As a result, they typically experience a lot of nagging false stops on the first couple of laps every summer.

The decision to begin buying T-Ls was aided by the observations of a neighbor who has T-Ls that are now 30 to 40 years old. He told Kreikemeier, “I don’t do much to them, just change the hydraulic filter. T-Ls just run and run.”

Bottom line: The Kreikemeier T-Ls are yet to have their first dealer service call.

Then there are the all-too- common summer electrical storms. Keep in mind that their fields stretch the diameter of a circle 60 miles. As Kreikemeier observes, “We might receive only .10-inch of rain with the lightening. However, the power has surged, and the electric pivots have all shut down. Meanwhile, the T-Ls are always running.”

He’s also noticed on some of their electric systems that the continuous starting and stopping is taking out the U-joints, often shearing them. He says that even on the newer electrics that this interrupted motion has to be harder on the gear boxes.

The continuous movement of the T-Ls is also appealing since Kreikemeier frequently fertigates through the systems. As he points out, “I do feel the constant movement significantly provides a more uniform application.”

Then there’s the matter of strength. No contest, according to Kreikemeier. He comments that, “The T-L’s have the quality and seem to have a little bit heavier iron in them than the electrics. I do know the angle irons are heavier.”

A careful shopper, with every center pivot purchase in recent years he’s always checked the T-L price against its competitors.

“The T-L has never been higher,” he reports. “I believe we’re getting a better, simpler, and more reliable machine.”

“Because, a lot of times when you have to troubleshoot an electric, the quickest way is to do it live. Even an area electric center pivot dealer was electrocuted three or four years ago.

“I have five children at home, and I definitely have one ‘farmer’ for sure, and I hope five. So, that 480 volts is probably the most important reason for buying T-Ls. Years ago we didn’t think about all that electricity. Today, it’s different.

“Whatever the reason, we’re happy with our T-Ls.” 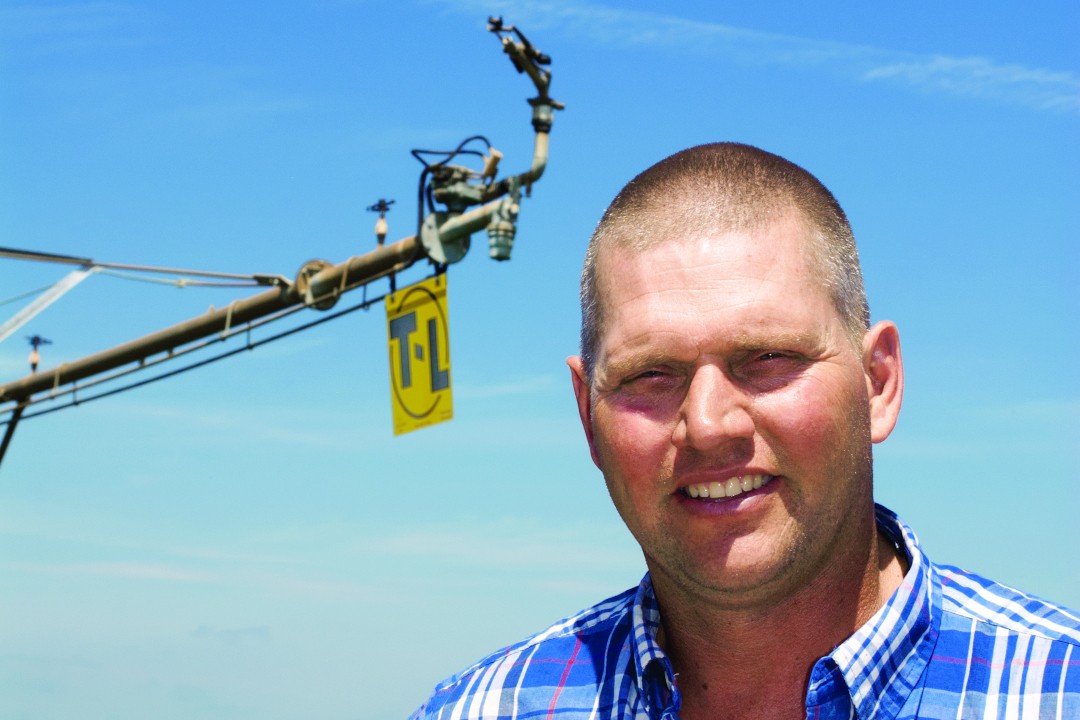