Monroeville, New Jersey
Back to Testimonials

"One of the things I like most about the T-L pivots is that the hydraulic drive provides continuous movement."

Center pivot irrigation wasn’t even a figment of the imagination when George Cassaday’s great grandfather, Harry Cassaday, established Cassaday Farms in 1895. Today, the farm that started with 70 acres near Monroeville, New Jersey, has grown to an enterprise that markets 40 different vegetables from asparagus to zucchini on approximately 2,500 acres, thanks in part to T-L Irrigation.

Although vegetables have always been part of the mix, they served only as a supplement to grain in the late 1800s and to a poultry business the early to mid 1900s. It wasn’t until the 1960s that vegetables took on a dominant role in response to a local demand from Campbell Soup and Seabrook Farms, Inc. In the late 1970s, George’s dad, George Sr., purchased some neighboring farms, in addition to renting more land, and grew the farm from 70 to 300 acres.

During the 1990s, the sales focus changed once again, particularly in light of the volume that Cassaday Farms produces on 2,500 acres. Today, most of the family’s produce is sold to distributors, wholesalers, supermarket chains and a few roadside stands. To facilitate this move, George took a technological leap in late 2000 by building a large 80 x 200-foot packing facility, complete with sorting machines, cold storage and loading docks for semi tractor trailers.

“Harvest generally starts in April with strawberries and asparagus and goes all the through late November with broccoli, cauliflower and sweet potatoes,” George adds. “Our choice of vegetables is mainly determined by two factors. First, a vegetable needs to be profitable. However, some vegetables are gown out of necessity, because other farmers don’t grow them, which means it captures more of a customer base.”

With a few exceptions, like asparagus and strawberries, which are annual crops that grow in the same small field from year to year, most of Cassaday’s fields produce two, three or even four crops per year. The fields that earlier produced peas or turnips, for example, will be replanted to sweet corn or sweet potatoes. Others that produced an early crop will be replanted to squash. As a result, Cassaday usually ends up with around 350 acres of sweet corn each summer and another 350 acres of sweet potatoes with all the other crops occupying a share of the acreage.

In the meantime, produce from Cassaday Farms is sold throughout the eastern half of the U.S., as well as to islands in the Caribbean. Ironically, Cassaday even had a shipment of squash on the ill-fated El Faro, the cargo ship that was destined for Puerto Rico when it sank in 2015 when it ran into Tropical Storm Joaquin.
Naturally, maintaining those types of markets means producing top-quality produce, year in and year out. That, in turn, means ensuring the crop has all the water it needs in a timely fashion.

“We started out with pipes and sprinkler heads and eventually traveling guns and hoses, but that required a lot of labor to continually move them around the field and between fields,” Cassaday relates. “It also made it hard to keep the crops watered evenly. We did have a couple of electric center pivot units early on, which helped with the labor issue. But, due to the electric drive, we seemed to get uneven water distribution. Plus, we had a few problems with the motors and electrical components.

“Since that time, we have gone entirely to T-L pivots,” he adds. “One of the things I like most about the T-L pivots is that the hydraulic drive provides continuous movement. We like to put on some of our herbicides through the pivot, as well,” he continues. “So the steady, non-stop movement of the T-L pivots is even more important for that reason.”
Cassaday says pivot irrigation is especially beneficial when growing row crops like sweet corn. However, he says center pivot irrigation has also provided benefits on crops like sweet potatoes and turnips.

“We currently have seven T-L center pivot units and I am planning on adding two more within a few months,” he adds. “We’ve had very little trouble with T-L units and even if we do have a problem, Lee Rain, which is our dealer in Vineland, New Jersey, has come out right away and taken care of it.”

“Now Lee and Todd Fiocchi, who represent the third generation to do business with my family, run the business,” he explains. “It’s been a great relationship and they’ve been a great dealership for T-L”

At the same time, Cassaday Farms is into its fifth generation of Cassaday family members. Today, George’s sons, Cody, Clay and George III are all involved in the operation. A lot of things may have changed in the last 122 years, but a century and a half of continuous vegetable production certainly appears to be in sight.” 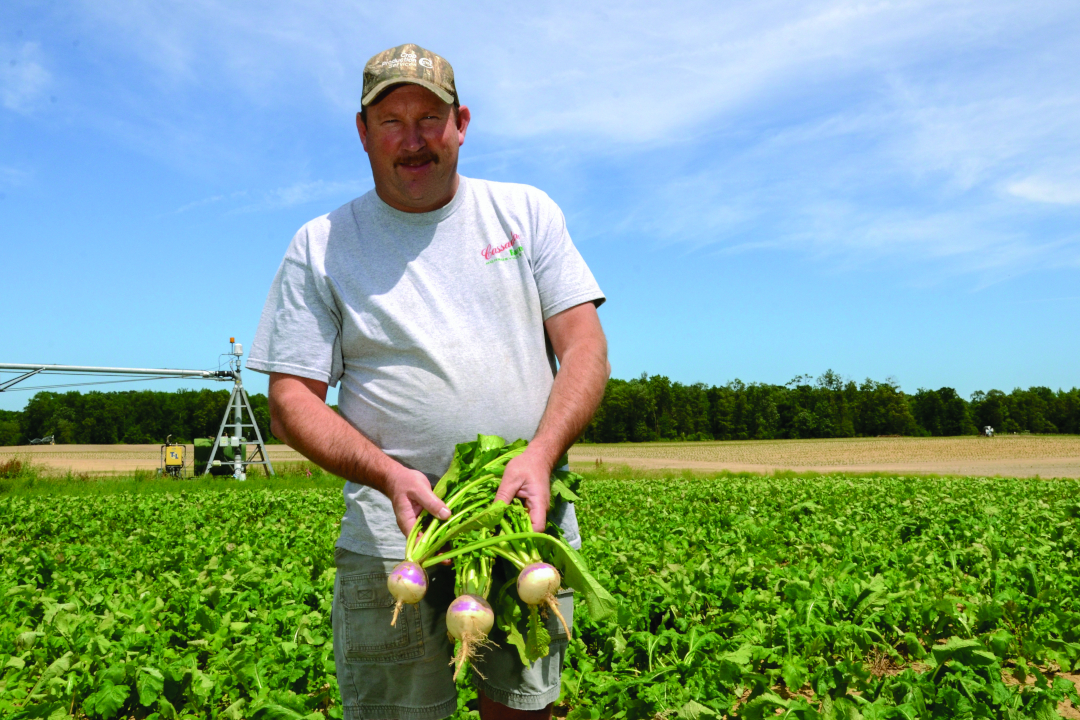