Loretto, Tennessee
Back to Testimonials

“Safety was the big thing . . . not having to worry about somebody getting electrocuted.”

Gaze across the timbered ridge tops of southern Tennessee and you’d never guess there are 19 T-L center pivot systems hidden among the rolling hills southwest of the small town of Loretto. Yet, for Stults Farms, the investment in irrigation has not only been an insurance policy against times of drought — such as the one that hit Tennessee and Kentucky in 2012 — but the extra water has led to higher yields on the 1,536 acres already covered by pivots. Plus, it has allowed the farm owners to more successfully produce a double-crop of soybeans behind wheat.
According to Ethan Stults, who owns and operates Stults Farms in partnership with his brother, Mark, the first four pivots were installed in 2013. A year later, eight more pivots were installed on another part of the operation after two 18-inch PVC pipelines — which allow for future growth — were laid side-by-side to supply water from a nearby creek.

By the time they finished erecting seven more pivots between 2015 and 2017, R&K Pivots, the T-L dealer in Russellville, Kentucky, had installed eight pumps and 50,660 feet of PVC pipe. That included a 300-horsepower engine in one of the main lines to boost the pressure and send water through another 4,000 feet of 18-inch pipe and up an additional 205 feet of elevation.
According to Ken Moore, owner of R&K Pivots and Stults Farms’ T-L dealer, water is pumped through 18-, 15-, 12-, 10-, 8- and 6-inch PVC pipe, as needed to maintain pressure. Meanwhile, the total distance from water source to the end of the farthest pivot is 3.5 miles and the total elevation from the water source to the highest point is 325 feet.

Stults says it’s been worth it, though, because they’re already harvesting an extra 50 bushels or more of corn under the center pivots. Plus, they know they can harvest a crop . . . even in the driest years. Their normal rotation on both dryland and irrigated acres consists of corn, followed by wheat and double-cropped soybeans for three crops in two years.

Stults says irrigation also guarantees that double-cropped soybeans after wheat will yield just as well, or better, than full-season soybeans on dryland acres. Unfortunately, less than 15 percent of the farm is irrigated as it is.

Stults says the decision to install T-L pivots didn’t come without some thought and planning, though. And it involved more than R&K Pivots’ ability to plot out a system that worked after water traveled through several thousand feet of pipe.

“I’ve known of others that had electric pivots that talked about having to replace motors, switches, etc. after a field flooded,” he explains. “Well, the easiest place for us to start, when we put in the first pivots, was on our bottom ground next to the creek. So after talking to Ken about it and finding out that it was irrelevant if the creek flooded, because T-L used hydraulic motors on the drive system, we figured T-L was the only logical choice.

“However, the safety was the big thing . . . not having to worry about somebody getting electrocuted,” he adds. “I told Ken, too, that I can figure out hydraulics, but electricity is a little more complicated.” Stults explains that the creek they’re pulling water from is at least 100 feet wide at several places and shoulder deep in a number of spots. “So we have plenty of water,” he adds, “and it works very well with the way Ken has it laid out.”

As Moore explains, “The system was designed to irrigate 505 acres at one time with one group of pivots and 496 acres with a different group of pivots at near equal amounts of pressure.”
“We can be watering corn while we’re cutting wheat,” Stults adds. “Then, as soon as the corn is past its need for water, we can switch over and start irrigating soybeans in the wheat stubble just by turning a few valves.”

The addition of center pivot units on part of the farm has also allowed the family to apply part of their fertilizer through the pivots. Plus, they variable rate both corn and soybeans, especially when planting irrigated fields.

“As farmers, we’re always trying to get the best price we can on our commodities,” he concludes. “But you have to watch expenses on the other end of it, too. That’s as important as trying to sell for more. At least you have some control over the amount you spend on growing a crop. However, there are also times that you have to spend a little money to reduce costs or increase yields . . . whether it’s adding GPS guidance to save on inputs or installing center pivot irrigation to guarantee yields.” 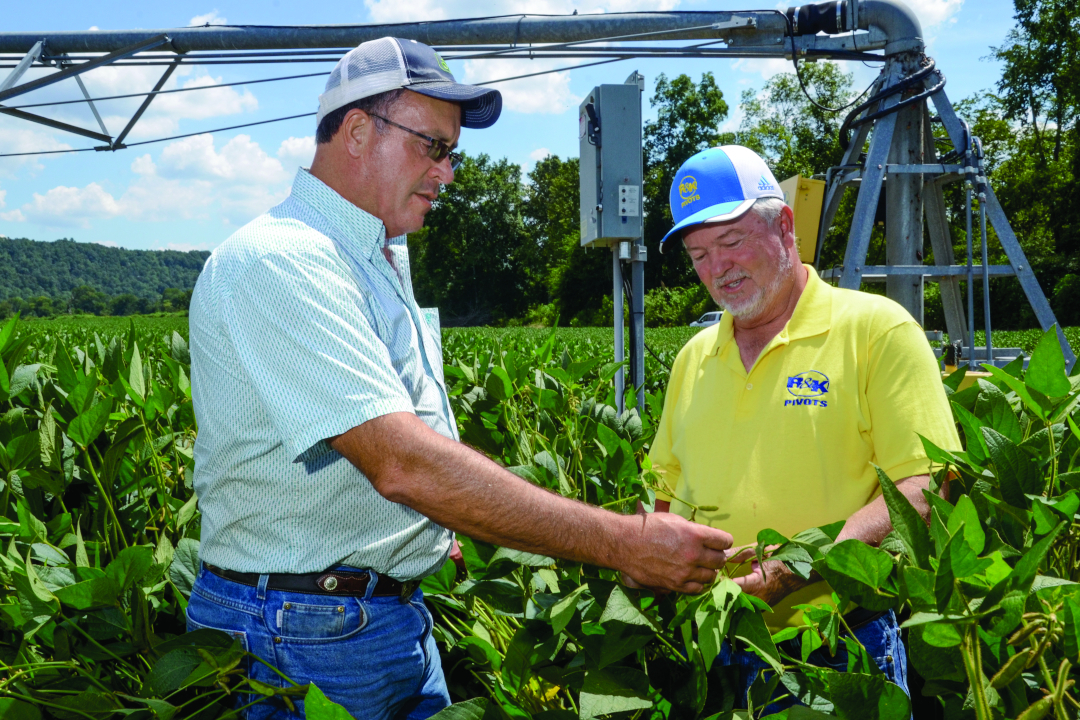