Koosharen, Utah
Back to Testimonials

"The biggest thing about my T-L is that it's been worry-free for me, I turn it on and then there are days that I may completely forget about it.."

Two innovative Utah farmers haven’t missed out on many modes of irrigation: They both started with flood irrigation using dirt ditches, then cement ditches, then “pioneered” with wheel line sprinklers and finally installed a T-L center pivot system.

“Yes,” reflects Don Torgersen, Koosharen, Utah, “when we installed the first wheel line sprinkler in the valley, we thought we had the cat by the tail. It was such an improvement over flood irrigation.”

But, as the years rolled on it became apparent that he needed further change in his irrigation methods. His main motivating factors were drought and higher electric utility costs.

After doing “a pretty good amount of study,” he installed a new T-L sprinkler this past spring. It’s continuous movement impressed him, according to Torgersen, who was apprehensive about the “spoking effect” on a crop grown under a stop-and-go electric center pivot.

He normally irrigates from June, which may see some frost, through August. The first thing he noticed operating his new T-L was that his June utility bill for the entire farm plunged from $1,270 to just $270 — only a fifth as much as before.

The big reason is that he went from a 50-horsepower centrifugal pump to pressurize his wheel line to the low pressure T-L system. The two seven-anda- half horsepower motors, one on the water pump and one on the hydraulic pump ate up noticeably less electricity.

“When I had the wheel line I’d alternate overwatering and then stressing my crop,” Torgersen points out. “I was on 12-hour changes. So, it would take me 14 days to get back to the original position. My crop was always uneven.”

Now his T-L completes a circle in two-and-a-half to three days, and then is shut down for four days before being started up again for another cycle.

The payoff: “This year, with my T-L, I’m irrigating a bit more acreage, but have used only half as much water as last year!” Torgersen emphasizes, “It’s dramatic what it’s done for water conservation, considering the drought.

“Center pivot irrigation and my T-L sprinkler have clearly exceeded my expectations far more than I’d ever hoped,” he continues.

“I’ve now achieved my goal of developing a farm management plan that enhances my existing operation by using state of the art technology to get the best possible use of my water resources,” Torgersen adds.

The continued drought has also taken a toll on Norman Jensen’s farm at Centerfield, Utah. Although he has some corn, his primary crop is alfalfa.

He says if he were still flood irrigating that he’d have run out of his water allocation by the end of June this year. As it is, with a center pivot T-L he was able to conserve enough water to grow a third crop of alfalfa.

The move from flood irrigation to wheel lines some years ago produced an increase in production as did the current switch to center pivot irrigation, according to Jensen. This was especially visible on some of his hilly, sandy acres where his alfalfa would always “burn” before the wheel line got back to the area.

His T-L is 1,468 feet long. It irrigates 155 acres with an inch of water in a three-day circle. That’s in contrast to a wheel line that would require 14 days of irrigating.

“The biggest thing about my T-L is that it’s been worry-free for me,” he adds. “I turn it on and then there are days that I may completely forget about it. I’ll just look out there every once in awhile to make sure the light’s flashing.”

Admitting that he could have installed any other brand of center pivot, Jensen says he first talked to other farmers who used T-Ls to get an idea of their experiences.

“Price-wise they were all comparable,” he continues. “But, I found the electrics had a lot of trouble with microswitches.

“I also liked the T-L’s hydraulic system and its continuous movement. It’s obvious that my T-L is putting an even amount of water over every square inch of the 155 acres it covers,” Jensen says.

“That goes a long way in getting my crops started and continuing to grow.” 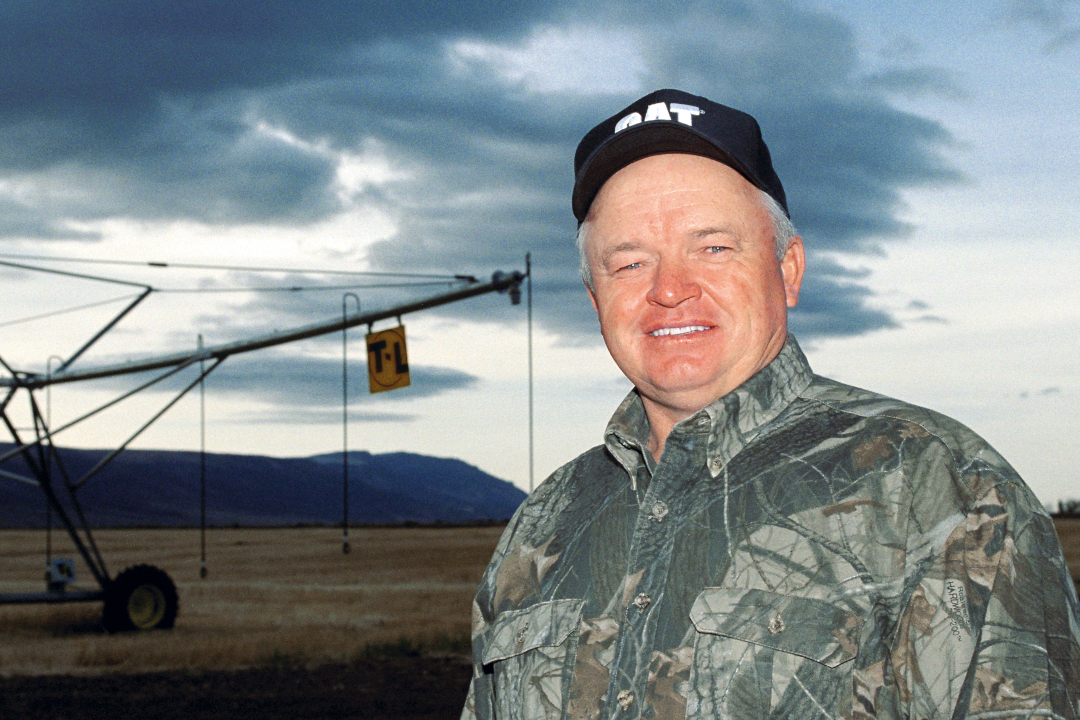