Gibbon, Nebraska
Back to Testimonials

"T-L pivots just won’t die, the reliability and dependability have been outstanding. They just last a long time."

If Lonnie Bohn and his brother-in-law, Don Blaschko, have any complaints about their T-L center pivot units, it’s the fact that “they last too long.” It’s not that they don’t appreciate the durability and longevity of T-L products. It’s just that they would like to replace the oldest one, which is more than 40 years old, with a modern, remote control T-L machine like the one they most recently installed.

The newest and the oldest T-L pivots are just two of seven T-L machines that Bohn and Blaschko use to irrigate approximately 1,000 acres of the 1,500 acres they manage near Gibbon, Nebraska, as B & B Partners. Other irrigation sources include a subsurface drip irrigation system on a 52-acre irregular-shaped field and one electric drive pivot that they’re also waiting to replace.

“The newest T-L pivot has already replaced one of two electric pivots that we had on the farm,” Don relates. “It was about the same age as the oldest T-L, when it literally tore apart from metal fatigue. We had welded on it several times before that,” he adds. “But it finally just split and pulled apart to where the water was just gushing out. That was about four years ago, and the T-L that was about the same age is still going.”

Even though they can’t bring themselves to replace a pivot that’s still working, the durability is one of the things the partners say they like most about their T-L units. With the replacement of a few drive motors and gearboxes and an update with drop hoses, it’s still doing the job.

“We have not had any problems with the T-L units at all,” Don adds. “The reliability and dependability have been outstanding. They just last a long time.” “Yeah, too long,” Lon echoes. “Especially when you’re looking for a good excuse to buy a new one.” B & B Partners’ newest T-L pivot is, indeed, a dramatic advancement from the machines built 40 years ago. The biggest improvement for Blaschko and Bohn, who have been partners for 45 years, is the availability of Precision Link, which allows web-based pivot control of the system. The newest model purchased from Mid-States Irrigation in Kearney, Nebraska, also allows variable rate irrigation (VRI) — a feature that has been added to a few of the partners’ other pivots — to match prescriptions created with the help of their agronomist and soil type and slope maps.

“We really like the Precision Link feature, which is available through T-L’s partnership with AgSense,” Lon relates. “The pivot that we have it on is five miles away from our center of operation. Yet, we can check it at any time with our phone or computer to make sure it’s running, see where it is in the field, find out how much water it’s putting on, etc.”
“We also ordered the newest T-L pivots with the large tires and planetary drives,” Don adds. “People always claim that T-L units move too slow, but with the large-diameter tires and planetaries, it will move right along. We can put fertilizer on or move it when planting at a pretty good pace.”

The ability to implement variable rate irrigation is equally important, says Lon. By combining VRI with no-till farming and cover crops over the winter — programs B & B Partners have used since 2001 — the Nebraska duo has virtually eliminated runoff.

“It’s also reduced tracking in the field,” Lon adds. “The system is programmed to slow down where the yield potential is highest and speed up to match the absorption rate on the slopes, so all the water stays on the field. I think the neighbors appreciate it, too,” he continues, noting that some of their slopes approach 16 to 20 percent grades. “But it has been beneficial for us, as well. We’re paying to pump that water; we might as well use it.”

“We recently did a field trial with different hybrids under variable rate irrigation,” Don adds. “And what we found was that there are some hybrids that like less water and some that like more water. So if you know the amount of water your crops need, you can tailor that accordingly.”

In the meantime, the two partners use all of their center pivot systems to apply fertilizer during the growing season. They found out early on that one of the drawbacks of a no-till system is the potential for crop residue to tie up applied nitrogen. To compensate, they currently have the Co-op put on about 20 gallons per acre of nitrogen with the floater when they apply herbicides. Then, Lon and Don put on seven gallons of 32 percent nitrogen, five gallons of 1034-0 and three gallons of thiosulfate with the planter.

“Then we spoon fed the crop with at least two applications of nitrogen through the pivots,” Don adds. “We’ll apply one shot when the corn is about waist high and do another application when it’s about shoulder high. At that point, we take leaf tissue samples for analysis. If they come out low, we’ll put on another application of nitrogen; and if it tests out where it should be, we’ll leave it alone.”

“That program has done several things for us,” Lon adds. “First, it has reduced our fertilizer costs because we don’t have the early spring losses that we had previously experienced. It also gives us a lot better plant health.”

Despite the savings on fertilizer, along with the water savings on the pivots that allow variable rate irrigation, B & B Partners still average around 220 to 230 bushels per acre on corn. And as icing on the cake, the yield under the newest T-L pivot was 258 bushels per acre.

It’s little wonder they’re ready for the last electric pivot and their oldest T-L unit to die so they can reap all the benefits of new technology. 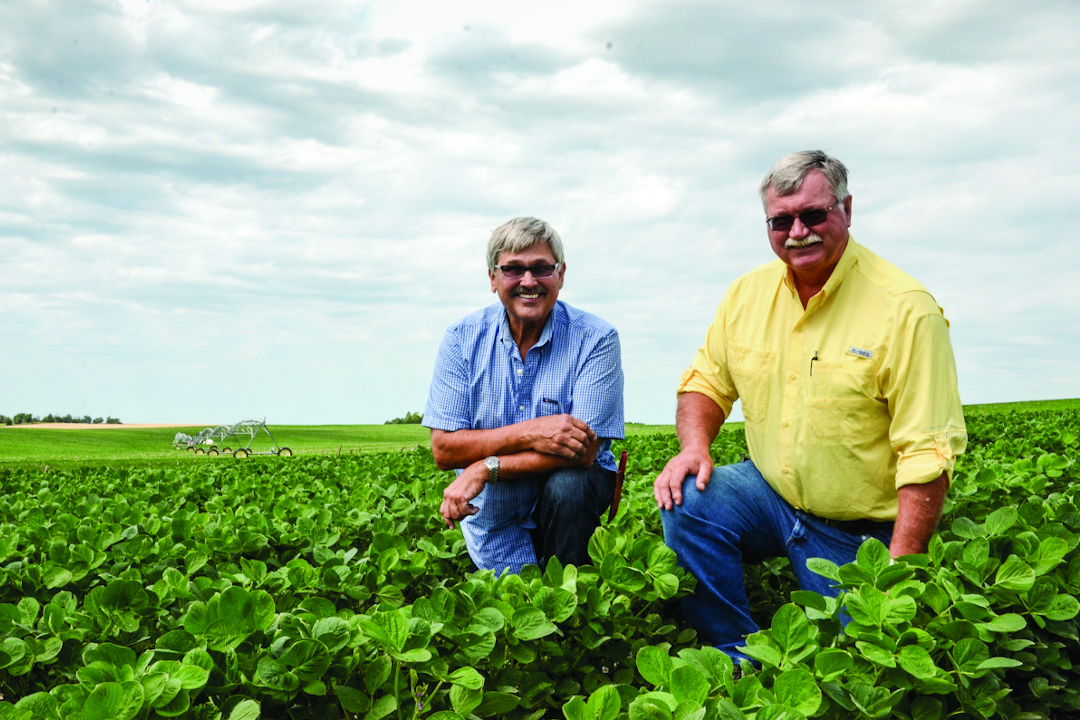