Pingree, Idaho
Back to Testimonials

"Our thinking is that center pivot irrigation in general, and T-Ls in particular, don't cost. Instead, they pay off in allowing us to be more productive while using less water."

Third generation on the farm and second generation with center pivot irrigation, Dayle Mecham is convinced that, “Irrigating properly is the key to growing potatoes and other crops profitably.”

“We feel that irrigation is the biggest and most important job we do,” he adds. “Certainly, planting and harvesting are also significant operations and just as labor intensive, but irrigation is what we do every day and spend the bulk of our crop production money on.”

Their education concerning the labor intensiveness of flood irrigation started young. To make it work, for example, the home place of 145 acres had to be divided into eight separate fields.

According to Mecham, they had ditches and water running every which way. Then a hand line system was installed that was quite an improvement. He remembers that it not only reduced their workload, but also allowed them to put an additional 20 acres under irrigation that previously couldn’t be leveled or was taken up by ditches and drain areas.

An even better updating, he says, was their switch to center pivot irrigation beginning in 1989. Now they operate seven pivot systems, including four that they own.

Their potatoes now generally receive 20 to 30 inches of water annually–and now they estimate they’re using just half the water that would be required to flood irrigate. Center pivots also let them maintain what they term a “tighter zone” of moisture.

As Mecham notes, “We think a center pivot system is good for an extra ten bushels an acre over hand lines and wheel lines on wheat, and improved yield and quality in potatoes. It also allows us to farm more ground with the manpower we have available.”

A potential downside of center pivot, he comments, is that if you get behind it may be difficult to catch up and get enough water applied. Large potato producers in the area routinely utilize crop consultants and the Mecham’s were pioneers of this practice among the lower acreage growers.

“We think of this as getting a valuable second opinion or as a check and balance,” Mecham explains. “And, while we usually come up with the same solution or scheduling as the consultant, it’s nice to have that second viewpoint.”

Their two-man crop consultant team also checks soil moisture meters and rain/sprinkler gauges to compile a log of each field’s moisture conditions. They take pains in making sure that the water holding capacity of the field doesn’t go below the 65 percent stress level.

“There is another reason we hire a crop consultant, they see a lot more potatoes than we can since we’re pretty well tied down here,” Mecham points out. “What they see in other areas or even neighboring fields can help us get an early start on potential problems.”

Mecham has well formed opinions based on his experience with center pivot systems, especially everything they are summed up by the word, “reliability”.

“On a 95-degree day with the wind blowing 15 miles an hour, it puts a big knot right here in your stomach if a center pivot breaks down,” Mecham comments. “We can’t afford down time then with any crop, but it’s crucial with potatoes. If we don’t get the water on right then, we’ll surely suffer quality and yield losses.”

That’s why he says they prefer their two systems made by T-L Irrigation Company, “because they just run and run. They last a long time and seem to be more reliable than other makes. For instance, we’ve yet to replace a gear box or any other major component on either of our T-Ls.”

The Mechams figure they’ve spent less than $100 a year on both their seven-year-old and 15-year old T-L sprinklers. Meanwhile, they seem to go through a couple of gear boxes a year on the electric center pivots they use.

“These electrics always seem to break down at the most inopportune time, too,” Mecham continues. “Even if we can get the part and install it ourselves, we’ve lost three to four hours.”

“And, we’ve had some problems with electric center pivots that were really aggravating. Once even the professionals took most of two seasons to locate and fix a problem that shut down one system almost every night.”

“There are also other advantages for the hydraulically operated T-Ls,” he says. Mecham believes water retention on hilly ground is better. The continuously moving T-Ls don’t cause the spoking action of the electrics when applying chemigation, either. Neither do they cause as much of a rutting problem in fields.

“T-L pivot systems are competitively priced, and we know we can count on them to be reliable,” Mecham says.

“Our thinking is that center pivot irrigation in general, and T-Ls in particular, don’t cost. Instead, they pay off in allowing us to be more productive while using less water, not to mention adding to our bottom line. They let us manage our crops the way we think it should be done.”

Dayle Mecham likes the two T-L Irrigation center pivot systems he and his brother, Val, utilize because they, “Just run and run”. This particular field will be rotated to potatoes for the following crop.

Potatoes is a crop that responds well to proper irrigation management, including use of a crop consultant for scheduling advice, according to Dayle Mecham.

For each field irrigated via center pivot system, the Mecham crop consultant provides a running record of soil moisture. This not only alerts concerning the need for immediate watering of their potatoes, but also shows if a trend is developing.

This is a chart prepared by the Mecham’s crop consultant. It indicates the recorded soil moisture levels in a center pivot irrigated field, showing how they relate to the critical “65 percent stress level”. 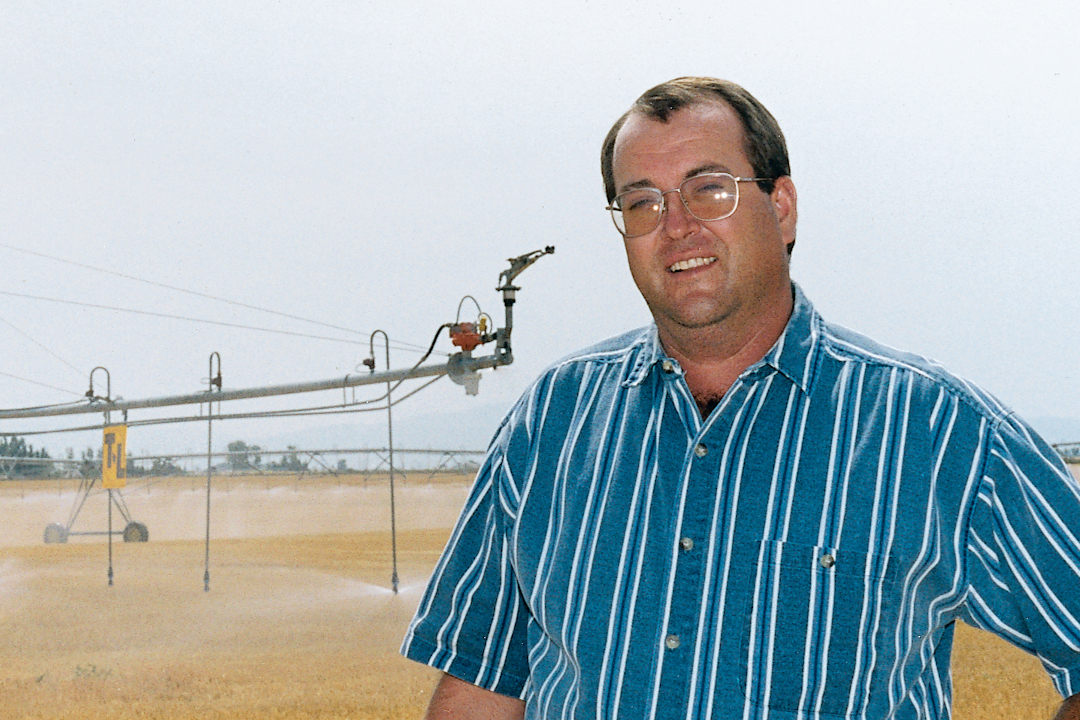