Laurinburg, North Carolina
Back to Testimonials

"With a T-L we don't have to worry about all the copper wire being stolen during the night."

T-L pivot irrigation systems have many advantages but what makes the Carmichael brothers really keen about their T-Ls is what they don’t have: Copper wire, lots of copper wire that attracts thieves in the night like a bear to honey.

Actually, the root of the problem, brothers Dave and Eddie explain, appears to be the all too prevalent drug culture supporting its needs, and, unfortunately, a goodly number of people in their area spend their night hours stripping copper wire from electric-drive center pivot sprinklers. They sell the copper wire at $1 a pound, then buy their supply with the ill-gotten gains.

The Carmichaels farm 4,000 acres. And, while cotton is their big crop, they also produce corn, wheat, soybeans, peanuts, tobacco, turnips, mustard, collards, and spinach on their Laurinburg, North Carolina, farm. They utilize conventional-till, strip-till, and no-till, depending on the situation.

Eleven months ago they experienced their first “hit”, discovering that one of their electric systems had been divested of all its copper wiring. Replacement cost, (and they don’t carry such insurance), was approximately $1,000 a tower, including wire, labor, and damage to the control box. That was just the start of the problem, since more of their irrigation systems were hit, some repeatedly.

“One time, for example,” Dave reports, we worked two days to replace the copper wire they’d stolen the night before. So, instead of doing all the other work we needed to do, such as ripping the cotton land and working on the planter, we had fix this important center pivot.”

This particular sprinkler was over spinach. The crop especially needed to receive irrigation, because the weather was so hot that the developing crop had to have water for both better yield and marketable quality.

“We started the system up–and they stole the wire again that night while the system was running!” he adds. “Well, at least they were getting wet the whole time they were stealing the wire.” One possible solution was to make stealing the copper wire so difficult that the thieves wouldn’t put in the necessary effort.

The Carmichaels banded the wire to the pipe.

“Yes, that slowed them down,” Eddie recalls with a grimace. “So, what did they do? The hitched a chain between the wire and a pickup truck, and pulled the wire out. That would have been bad enough, but in the process they also dropped one tower and broke the pipe.”

Next the brothers tried digging ditches around the field and putting up gates. They also invested in a pair of security guards. Finally, they installed satellite phones programmed to call them when any tampering took place so law enforcement could be alerted.

However, by the time they arrived the thieves were always long gone “into the trees”. Frustration! Then the brothers learned there was one center pivot system that didn’t depend on electric drives to operate: T-L. To date they have installed five T-Ls to accompany their 13 remaining electric units.

“With a T-L we don’t have to worry about all the copper wire being stolen during the night,” Dave comments. “When we go to start up a T-L system, it starts!” 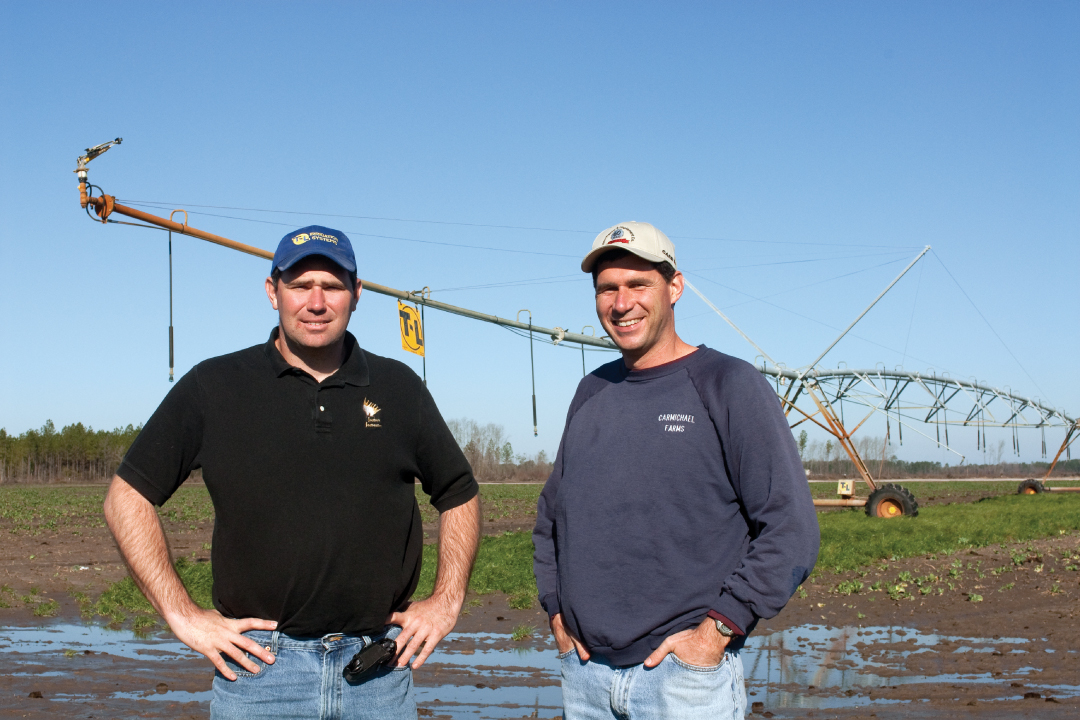