Lusaka, Zambia
Back to Testimonials

"We’ve had very few problems with our T-L pivots, with the hydraulic drive, we’re able to do much of our own maintenance, and we are well looked after by our dealer"

Water seems to abound in the Southern Province in Zambia, Africa. Not only is it home to Victoria Falls, Zambia’s premier tourist attraction, but the Zambezi River forms the province’s southern border. In addition, Lake Kariba lies along the southeastern edge of the province, while the Kafue River marks the northeast border. It’s no wonder the Southern Plateau, which lies in the center of the province, represents the largest area of commercial farmland of any Zambian province and produces most of the country’s corn (maize) crop.

Located to the northern part of this fertile province is the town of Mazabuka, where Clinton Bruyns serves as both general manager and farm manager for Kapinga Enterprises, the largest private T-L user in Zambia. Wholly owned by Doug Cantlay, Kapinga Enterprises is a commercial farming operation that manages nearly 5,000 acres (1,980 hectares) of corn, soybeans, wheat, sugar cane and pasture. Of that total, approximately 3,324 acres (1,345 hectares) is irrigated, including several acres of virgin land that has yet to be planted.

Although Kapinga Enterprises uses some overhead sprinklers and drip irrigation, Bruyns says most of the irrigated acres are watered by a total of 25 T-L center pivot units, thanks to a move to center pivot irrigation approximately 12 years ago. However, even though water seems to surround the province, Bruyns insists that getting water and power to the units is still the biggest challenge. Since none of the irrigation water comes from wells, it all has to be routed from nearby rivers and lakes. In the meantime, the need for power isn’t as much for the pivots, thanks to T-L’s hydraulic drive, but rather for the pumps, which are driven by electric motors.

“We’ve had very few problems with our T-L pivots,” Bruyns continues. “With the hydraulic drive, we’re able to do much of our own maintenance, and we are well looked after by our agent, Multicrop Ltd., and by T-L reps.”

It was Multicrop Irrigation, in fact, that led a massive project to bring irrigation to the Oklahoma Farm, the most recently developed of three farms on the operation. In addition to installing 22 pivots that cover 2,693 acres (1,090 hectares) on the Oklahoma Farm alone, Multicrop helped install a pump station at the pickup point from the canal. To distribute the water to the various fields, the company also installed four 120-horsepower, 1,450 RPM (90kW) booster pumps, which have the capability of moving 8,800 gallons per minute (2,000 M3/hr) through a network of PVC pipes a total of 23,157 feet. (7,060 M).

Phase two of the Oklahoma Farm project involved the installation of two 215 horsepower (160kW) 1,450 RPM VSD-driven booster pumps, which have the capability of moving 7,700 gallons per minute (1,750 M3/ hr) a distance of 12,300 feet (3,750M). Once the project is complete, Multicrop will also be installing hand move drag hoses that will cover 237 acres (96 hectares) of crop land.

“Another thing we like about T-L center pivots is that they are robust and yet safe at the same time,” he continues. “They ‘walk’ continuously in a straight line tower-for-tower, which gives me an advantage when applying fertilizer or chemicals.”

That’s particularly important to Bruyns, since many of his crop protection chemicals and fertilizer are applied through the pivot. While they broadcast a base fertilizer, nearly 350 tons of top dress and foliar fertilizers are annually applied with the pivot. The same goes for many of the herbicides and insecticides.

“Our main sugar cane herbicide is applied through the pivot, as well as insecticides for the troublesome yellow sugar cane aphid,” he explains. “Ground-dwelling insects are also controlled with the pivot, including cutworm/black maize beetle grubs. American bollworm is another pest that is treated through the pivot at late stages of the row crops. From time to time, we even use the pivot to treat for stalk borers in sugar and row crops.”

In the meantime, Bruyns uses crop rotation to help with weed and insect control, as well as fertility.

“Sun hemp is largely my green manure crop,” he explains. “Some fields are planted to maize for two years, soybeans for one year and then sun hemp. Others are planted to soybeans for two years, maize for a year and then sun hemp. Wheat is planted between these crops. For the sugar cane fallow, we try to follow with a rotation of soya, wheat, sun hemp and then replant to sugar cane.”

In response to the need for water and crop protection on his mix of sandy and loam soils, Bruyns says the pivots run an average of 2,000 hours per year, with water applications averaging around 20 millimeters (0.79 inch) per revolution, unless fertilizer or chemicals are being applied. Then the speed depends on the product and the application rate.
“We definitely want to look at adding more T-L units in the future, as long as the price remains competitive,” Bruyns concludes. “The advantages they provide in our operation are far superior to irrigation methods we used in the past.” 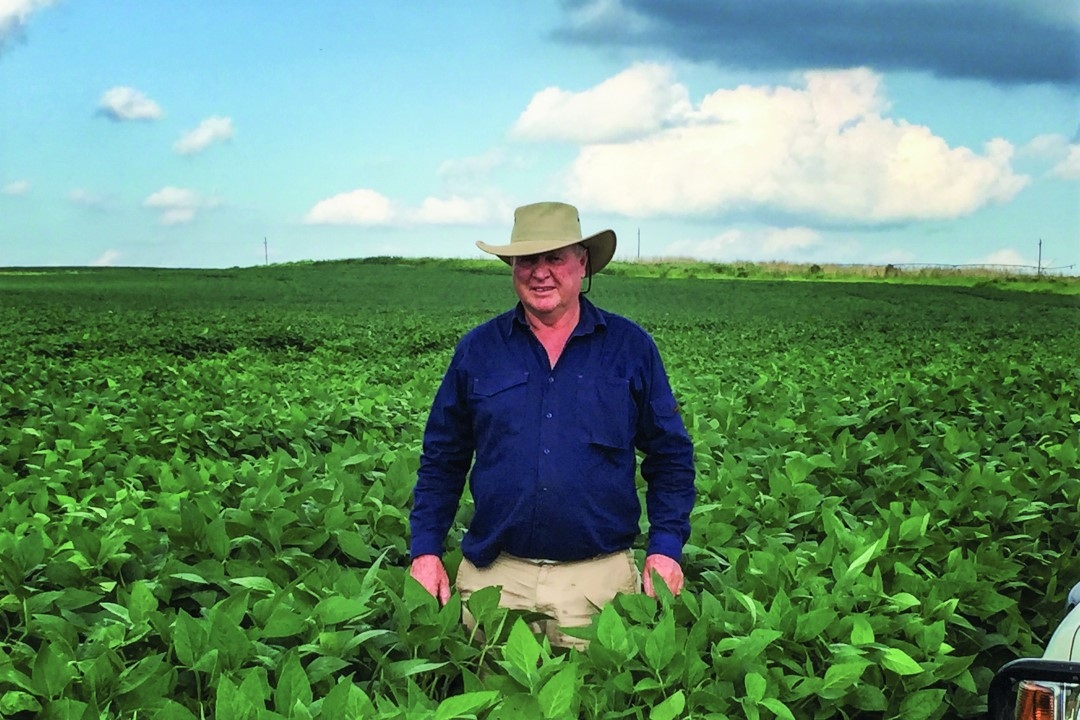