Ten Sleep, Wyoming
Back to Testimonials

"I need center-pivots that are dependable, that's why I like the hydraulics of the T-L's"

Surprisingly, not all the homesteading was done in the late 1800s. Thanks to the Desert Homestead Act of 1970, the parents of Casey Johnstone’s wife were able to “prove up” on their homestead near Ten Sleep, Wyoming, and later buy out several other homesteaders.

With average rainfall only in the high single digits, irrigation has always been a necessity for the operation’s success. Thankfully, they could tap an artesian well for some of their irrigation water requirements plus two 4,000-foot deep wells that each produce 1,000 gallons a minute.

So, six years ago Johnstone replaced one electric system with a hydrostatically powered T-L that irrigates 140 acres. Three years ago he installed a second T-L, and intends to replace all the remaining electric systems with T-Ls as soon as conditions allow.

His main crop is alfalfa. He feeds his lower quality hay to his 150 head of Angus-cross cows and their backgrounded calves during the winter and sells the high end of his hay on the open market. The average yield he harvests is five tons per acre annually. His other crop is malting barley that averages 80 bushels per acre.

Johnstone generally applies one-third inch of water per day during each three-day rotation on alfalfa. Thus in a typical irrigation season of 90 days he’ll apply 30 inches of water. However, since he can run his T-Ls when it’s as cold as 25*F, he sometimes irrigates right into October.

“Why did I start buying T-Ls?” he asks, then he quickly answers by emphasizing, “No more electric systems for me! It seems I’m always fighting with these darned electric pivots, and it’s so hard to hire somebody to come ‘way out here to fix them. It’s too easy to be down a day or two, or even as long as five days, just trying to figure out the problem.

“And, electricity is dangerous,” he adds. “You can’t see it, and if those 480 volts nab you, well, you’ve had it. Electricity and water just don’t mix.”

On the other hand, Johnstone says he likes his T-Ls for their hydraulic simplicity, which makes them “a heck of a lot different” from the electric systems he’s running.

He figures that when any repairs will be needed on the T-Ls that he can do it himself. As he points out, he originally put up the two T-L systems with the help of two other men, which saved him some money. He wouldn’t have even attempted to install an electric system.

“I need center pivots that are dependable,” he stresses with a glance at the vast, sagebrush-covered, BLM areas surrounding his farmground’s pivot circles. “That’s why I like the hydraulics of the T-Ls; if you want to keep them running, get T-Ls.”

Whether it’s due to the continuous movement of the T-Ls or other factors, Johnstone’s hay harvest records indicate a 20 percent higher yield of alfalfa under a T-L compared to a similar field running an electric unit.

Also, Casey observes that “Stopping and starting all the time makes a lot of difference in the amount of wear and tear on a sprinkler.”

Every center pivot sprinkler makes tracks, which, depending on the soil type, can become ruts that guarantee a bouncy tractor or pickup truck ride that is hard on equipment, plus a too deep rut can also cause a tower to get stuck.

Johnstone has solved this problem by filling the wheel tracks of his sprinklers with gravel and then farming the land in circles rather than straight rows.

“This requires roughly 700 cubic yards of gravel for each pivot.” he says. “Yes, that’s a lot of gravel. But, my fields are so nice to drive across now and there’s no danger anymore of a tower getting stuck.” 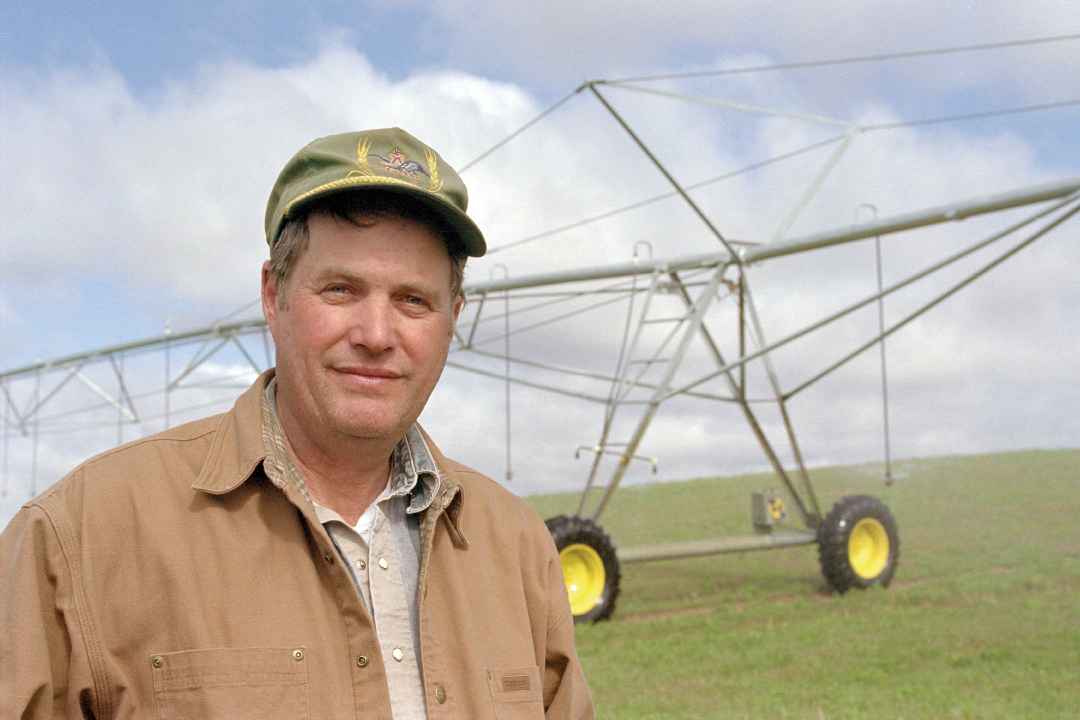