Rector, Arkansas
Back to Testimonials

Rector, Arkansas businessman Lionel Dodd knows how to make folks laugh and think at the same time. Recently, when asked why producers should go the extra mile to install well built, technologically advanced, dependable, safe, efficient center pivot irrigation and not be tempted by manufacturers offering systems at rock bottom, discounted prices. Dodd analogized, “If you need transportation, you can buy a Yugo. It will get you where you’re going for a while, but not for long. Then, if you’re lucky enough not to lose your job because you don’t have a way to get to work, you’ll go out and buy the car you should have bought in the first place.”

While Arkansas cotton producer Brett Palmer may chuckle at Dodd’s analogy, he knows it contains sound advice that he can’t afford not to heed when starting out on the long road he must travel from planting to harvest an unpredictable road where the profit threatening challenge of inadequate rainfall must not be faced with watering systems in the “Yugo” category.

That is why he chose T-L center pivots, sold and serviced by Continuous Movement Irrigation, headquartered in Rector, Arkansas, a T-L Irrigation fran-chise, co-owned by Dodd and Leonard Banning. “Profitability, the opportunity to continue farming the land I’ve lived on all my life, to provide well for my family everything depends on the performance of my crops, and a key contributor to that performance is the capability to provide the right amount of water at the right time in the absence of adequate rain fall,” says Palmer, who rarely produces yields less than 1,200 pounds per acre. Some years, has reached the 1,500 pound mark on his best ground.

“I’ve learned that if I do all I can to make good yields, I’ll profit, even in less than ideal market years,” he says. “Implementing reasonable economic restraints on crop inputs is one thing; cutting corners with no regard to jeopardizing optimal production is a gamble I’m not willing to take. I’ve seen what can happen when producers try cutting per acre spending by $10 and end up losing $100.”

Palmer didn’t acquire such farming savvy overnight. He’s now 29 years old, but his dad, Terry, put him on a tractor when he reached the tender young age of eight. Although the two men farm individually, they work together on land that has been in the family for almost 100 years. Brett’s grandfather, George, now retired, established Palmer Farms in the 1940s. All total, they work approximately 2,800 acres, with about 2,000 acres planted to cotton annually.

Perhaps no farming area in the country offers such ample, readily available subterranean water as does the Northeast Arkansas delta region, where the Palmers farm. They are thankful for this asset and aren’t about to compromise it by using irrigation equipment that cannot evenly distribute this resource when it’s needed.

“Precise, evenly distributed watering on every square foot is one feature of T-L center pivots I can always count on,” Brett says. “I’ve seen aerial photographs of drought stressed cotton under electrically powered center pivots that clearly show ‘pie wedges’ of the crop behind the system that didn’t receive enough water.”

This happens because electrical systems surge forward five or six feet and then stop, resulting in more than enough water sometimes on swaths either side of the system at the point where it stopped, but not enough in strips behind that swath.” To illustrate his point, Palmer points to one of his four T-L center pivots. The whole system is in a straight line and remains straight while moving in a fluid, non jerking manner, thanks to hydraulic power. Whatever the setting, the system never stops and therefore never over or under waters portions of the circle it covers.

Depending on the soil type, Palmer favors different water applications as the crop progresses through the growing season. “I’m more of a believer in applying a little bit less water, getting around faster, and thereby rotating more often,” Palmer says. “Either way a relatively light set-ting or a heavy one, fuel consumption is the same. With T-L, I know for certain that if the system is set to apply six tenths of an inch, there is no fluctuation whatsoever from the beginning of the rotation to the end. In a dry spell, such accuracy provides a huge advantage when cotton is in the crucial squaring stage or the boll filling stage.”

Also, because this area is on the northern edge of the Cotton Belt and has a very narrow, optimal planting window, Palmer has taken advantage of T-L’s precise, even distribution capabilities to plant in dry ground when soil moisture was not adequate for planting and no rain was in the forecast.

“I’ve planted in dry, cloddy ground and used the T-L pivots to provide just the right amount of moisture to assure solid stands of cotton, leaving no areas supporting weak plant populations due to moisture deficit during germination and sprouting,” he says. “Corner acre age beyond the pivot’s range came up spotty at best, but within the circle the stand was even all the way around.”

Because Palmer also waters with one electrical system in addition to the hydraulically powered T-L’s, he’s been able to closely compare such features as simplicity of operation, ease of main-tenance, and, perhaps most important of all, safety.

“You simply cannot put a price on safety,” he says. “Just one accident involving personal injury or death can put a whole farming operation in jeopardy.” Once, while Brett was off on a trip with his family, he asked his father to keep an eye on the pivots, all of which were running. “I called to see how things were going, and Dad said he was on his way to shut them down because the whole farm had gotten a two inch rain,” he says.

“Knowing that he would expose himself to the deadly combination of water and high voltage to shut down the electrical system worried me sick. That alone-not having to worry about someone being electrocuted is all the reason anyone should need to use T-L systems, which do not pose this great danger.”

Palmer has no doubt that investing in T-L technology is a sound decision for producers looking for utmost peace of mind that comes from having “liquid crop insurance,” and has no reservations about recommending T-L irrigation to other producers. “Look at it this way,” he says. “Let’s say you’ve got a piece of ground, especially if it’s sandy ground, that historically yields in the 800 pound per acre range, and you know that, because of the soil texture, rainfall that isn’t sufficient or comes at the wrong time might reduce that yield significantly. If you had irrigation capability such as that provided by T-L to not only avoid yield shortfalls due to drought but also to boost the yield by perhaps 400 pounds per acre, year in and year out, just do the math. It’s a no-brainer, in my opinion.” 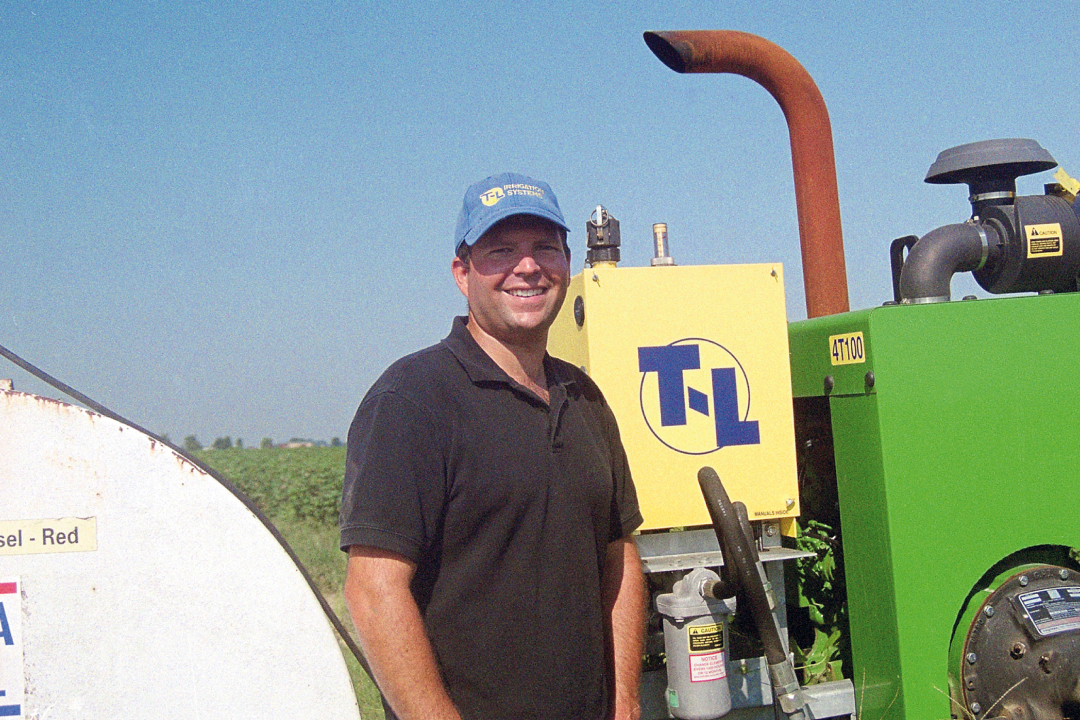