Amarillo, Texas
Back to Testimonials

"The biggest plus with the PMDI System, though, is the fact that the wheel tracks remain dry."

Imagine a $120-per-acre investment that could reduce irrigation expenses by 30 percent or more, while increasing yields by at least 20 percent. According to Bob Gruner, who farms southeast of Amarillo, Texas, those aren’t fantasy figures. He has the records to prove that installing a T-L Irrigation Precision Mobile Drip Irrigation (PMDI™) system on a half-mile pivot a year and a half ago provided exactly that kind of results.

The idea seems simple enough. The system consists of in-line drip hoses, in place of nozzles or sprinkler heads that are dragged by the center pivot or lateral-move system. It doesn’t have to be installed on a T-L system, either. In Gruner’s case, the PMDI system was installed on an electric-drive unit.

As the hoses are pulled through the field, emitters deliver an even water pattern across the full length of the pivot or linear system. In effect, PMDI technology combines the lower cost of center pivot irrigation with the proven efficiency of drip irrigation for total water efficiency that approaches 95 percent.

At the same time, Gruner says he was able to shut off the water a month early on the PMDI field due to the amount of water in the soil profile, even though the farm only received 5½ inches of rain during the year. In fact, he has the soil profile charts that compare the PMDI field against a field with drop hoses and LDN (low drift nozzles) on 60-inch centers that was receiving 30 percent more water. With each application, the water applied with the PMDI system penetrated all the way into the root zone, while the LDN heads concentrated the water in the top three inches of the soil profile.

“In our part of the country, it can take four hours for water to seep into the soil. So if you have sprinkler heads that pool water on the surface, you’re going to have some runoff. But with the PMDI hoses, the water spreads out and seeps into the soil before it has a chance to run off, evaporate or blow away in a mist,” Gruner continues. “We’re on limited water in this area and the well on the whole 270-acre pivot only puts out 500 gallons per minute. So we have to conserve as much water as we can. That’s why I can see this system paying for itself in two years or less.

“I was a little concerned that because the hoses are on 40-inch spacings, we would see some striping in the wheat,” he admits. “But that never happened. Now, if we had sandy soil, like they do in some areas, we might need the hoses to be closer together. Otherwise, the water would go down faster than it spread out. But with our thick soil, it wasn’t an issue.

”Gruner does admit, though, that the PMDI system requires a little more maintenance than bubblers or LDN sprinklers. While it may not be necessary everywhere, Gruner says he ties the drip hoses up to the goose-neck drop hoses at the end of the season to prevent deer from stepping on them over the winter. Worse yet, deer seem to want to chew on the drip hoses … possibly due to calcium in the irrigation water … if they can reach them. Once spring arrives, he simply unties and inspects all the drip hoses prior to first use and enjoys near maintenancefree performance until fall.

Some 80 miles north, near Stratford, Texas, Jon Engelbrecht has seen similar results from a PMDI system he installed on an electric pivot in early 2016.
“The key ingredient down here is water,” he agrees. “There’s only so much we can use each year and you’re talking real dollars for every extra inch you pump. With the PMDI, we’re using just twothirds the amount of water we would use with a regular nozzled sprinkler.”

Engelbrecht explains that instead of making a full circle with the pivot every nine to 10 days, he can make a circle with the PMDI unit in eight days. More importantly, the water does not run off or pool in low areas, but is seeping into the ground and soaking underneath between the hoses.

“Another major benefit is that the wheel tracks stay dry, since the hoses are being dragged along behind the unit,” he adds. “My guys are constantly having to dig out the other pivots because they’re always getting stuck. The other thing they like is that they can work on or around a pivot while it is running without getting wet.” Because all his corn is planted in 20-inch rows, Engelbrecht says he does see the drip hoses ride up into the corn stalks quite often. However, he says it doesn’t seem to matter on water application.

“That was one of my concerns,” he says. “Every PMDI system I had seen before was on 30-inch rows, so I wasn’t sure how it would work on narrower rows. But it doesn’t seem to matter. When the tape is up riding on the leaves, it’s like watching a cool, little waterfall,” he adds, noting the PMDI hoses are spaced 40 inches apart. “It just goes from leaf to leaf until it reaches the ground, where it’s still doing the job.”

Engelbrecht says he is already planning to install T-L PMDI systems on three or four more pivots over the winter, bringing the total to nearly 1,000 acres under PMDI. At the same time, he hopes to increase the total acreage irrigated with a subsurface drip irrigation (SDI) system to around 1,000 acres, as well.

“Both systems are extremely water efficient,” he says. “However, there’s a tremendous difference in price between installing an SDI system and simply adding PMDI to an existing pivot. If you can’t pay for a PMDI system in three years or less, you’re either a pretty poor farmer or you’re putting on too much water.”

Harold Grall, who farms north of Dumas, Texas, agrees that the investment in a PMDI system just makes sense on fields that already have a pivot.

“We are looking at all the options that are out there,” says Grall, who is on the board of directors for the North Plains Water District. “This past season, we had trials on our farm that compared subsurface drip irrigation, bubbler heads on center pivot drop nozzles, and T- L’s PMDI system.”

Grall explains that one 120acre demonstration features a T-L hydraulic-drive pivot equipped with PMDI hoses on 30-inch spacing, while another 120-acre T-L pivot has the drop tubes divided between PMDI units and bubblers, with both on 30-inch spacing.

“I like the idea of doing something with the pivots, since we already have the capital investment in the system,” he relates. “We’ve seen some great results with subsurface drip irrigation, but it’s a huge capital investment to put drip in. So if we can use something we already have to get the same kind of results, we’re that much ahead.
“The biggest plus with the PMDI system, though, is the fact that the wheel tracks remain dry,” he adds. “With our soils, we normally can’t shut off the pivots or they get stuck. With the PMDI system, it doesn’t matter how fast you put on the water or whether we have to stop part way around the field. “I can definitely see some advantages with the PMDI system.” 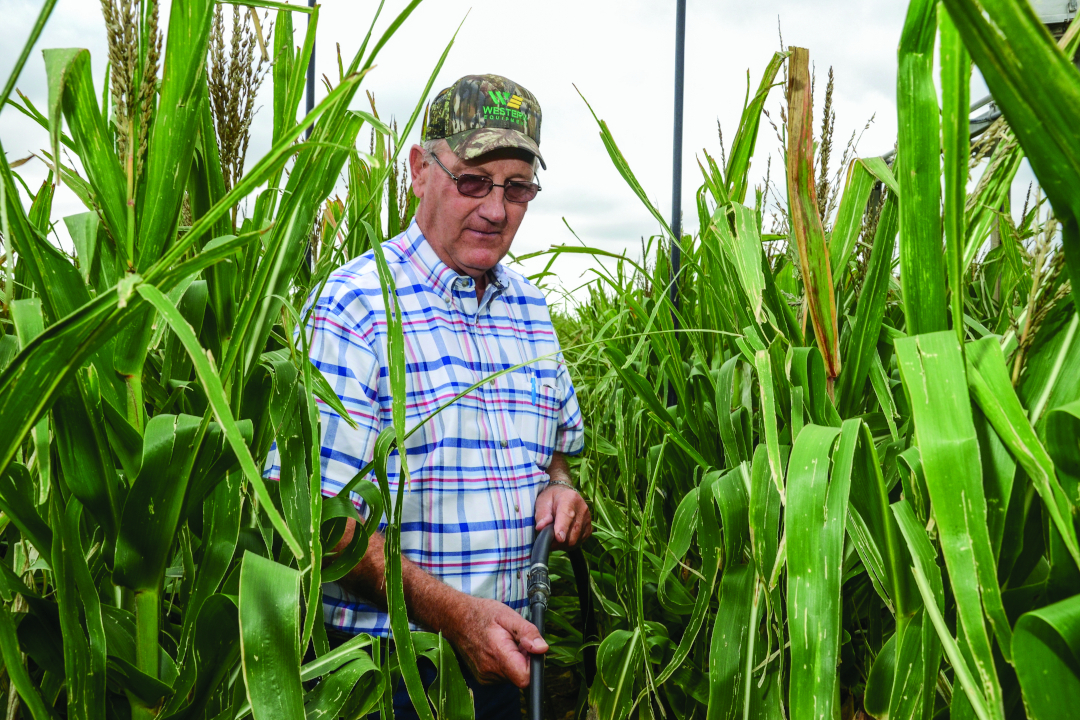