"I have neighbors who have had serious problems with people stealing the wire off their pivots. So the idea of hydraulic drive in place of electrical components appealed to me."

Even though it’s been nearly four years since he “got rid of tobacco” on his Rowland, North Carolina, farm, Michael “Bo” Stone, says he still doesn’t regret the decision. For one thing, it allowed Stone, who farms approximately 2,300 acres with his wife, Missy, and his parents, Tommy and Bonnie Stone, to buy his first T-L center pivot unit. Basically, the Stones took the money they made from selling their tobacco equipment and invested it in irrigation for their corn and soybean crops.

Equally important, Stone says dropping the labor-intensive crop allows him to spend more time with his family, which includes three children under the age of 13.

“Traditionally, we were a tobacco farm with around 80 to 100 acres in tobacco each year,” Stone relates. “However, it had gotten to where the markets weren’t as good as they once were. And as diversified and ‘hands-on’ as we were, it was getting hard to keep up with everything.

“It got to the point,” he continues, “that my kids would still be in bed when I left in the morning and they’d be back in bed by the time I got home at night. Then I’d get home from church on Sunday and fall asleep in the chair. That’s when I decided something wasn’t right. It’s hard to be both a good tobacco farmer and a good father and husband.”

The winner of the 2010 North Carolina Swisher Sweets/Sunbelt expo Southeastern Farmer of the Year award, Stone admits the operation is still pretty diversified with field corn, soybeans, wheat, strawberries and sweet corn, as well as around 70 head of cows and a hog feeding operation that finishes about 10,000 head annually from six barns.

“Our crop mix didn’t change when we dropped tobacco,” he says. “We just took it out of the mix, which not only gave us more time to devote to the other crops, but opened the door to irrigation.”

This year was the first year Stone has had any soybeans under irrigation, but he expects those to benefit as much from the extra water as the corn has after just four years of irrigation. After putting in that first pivot in 2008, Stone has already added four more full- and half-circle pivots, bringing the number of irrigated acres to just over 500.

“We were hit with a couple years of severe drought in this area a while back, so people have been looking for ways to lessen the effects of those times, while also increasing yields on the fields they own,” Stone relates. “Obviously, the jump in the number of irrigated acres in this area has really coincided with the spike in commodity prices.

“On the other hand, I don’t farm anything for crop insurance; I put in the pivots for higher yields and to make money,” he confesses. “Now, is that an added level of insurance for me?” he asks. “Certainly, and barring a hail storm or wind storm, I should always have better yields under irrigation.”

Stone notes that the family’s five-year average on dryland corn has been in the range of 125 to 130 bushels per acre, with dryland soybeans yielding from 30 to 35 bushels/acres. With irrigation, he says, 220 bushels per acre or more in corn is not out of the norm. In fact, last year, they had the highest certified no-till irrigated corn plot in the state at 268 bushels per acre.

“We’ve picked the ‘low-hanging fruit’ first,” he remarks. “That is, we’ve already put T-L pivots on the largest fields where the cost per acre is the lowest.”

Still, Stone says he is already looking at adding even more T-L pivots next year and hopes to eventually have all of the land that he and his family own under irrigation. If he can work out an agreement, he hopes to add irrigation to some of the land that is under a long-term lease, as well.

Stone isn’t likely to sway away from T-L, though, even if there was a price difference.

“When you find something you like, you tend to stick with it,” he insists. “When we first looked at putting in pivots, we looked at T-L, as well as some of the electric models,” he adds. “But I liked the fact that the T-L didn’t have copper wire running the length of it. I have neighbors who have had serious problems with people stealing the wire off their pivots. So the idea of hydraulic drive in place of electrical components appealed to me.

“After doing a little more research on the T-L, I also liked the more even watering pattern that you get from a constantly moving machine — particularly since we’re using the pivots to apply nitrogen. And I think the reliability of it is very good, as well. We’ve not had any issues at all in that respect.”

Stone says another deciding factor has been Mark Stockton, his T-L dealer in Lumberton, North Carolina. Stone explains that while they started working with Mark at another dealership, they stayed with him when he moved closer and opened his own business under the name, Circle S Irrigation.

“He not only understands irrigation and the fact that the machines need to run when we need them, but he has done a good job of putting together classes to help teach us about irrigation and water management,” Stone adds. “So he has actually helped us to be better stewards of our resources, while being better producers.

“I represent the sixth generation of my family on this farm,” he concludes. “Yet, my goal isn’t any different than it has been for previous generations. That is to produce high-quality food and farm products in a profitable and environmentally responsible manner. We’re just doing it in a little different manner today with the help of irrigation.” 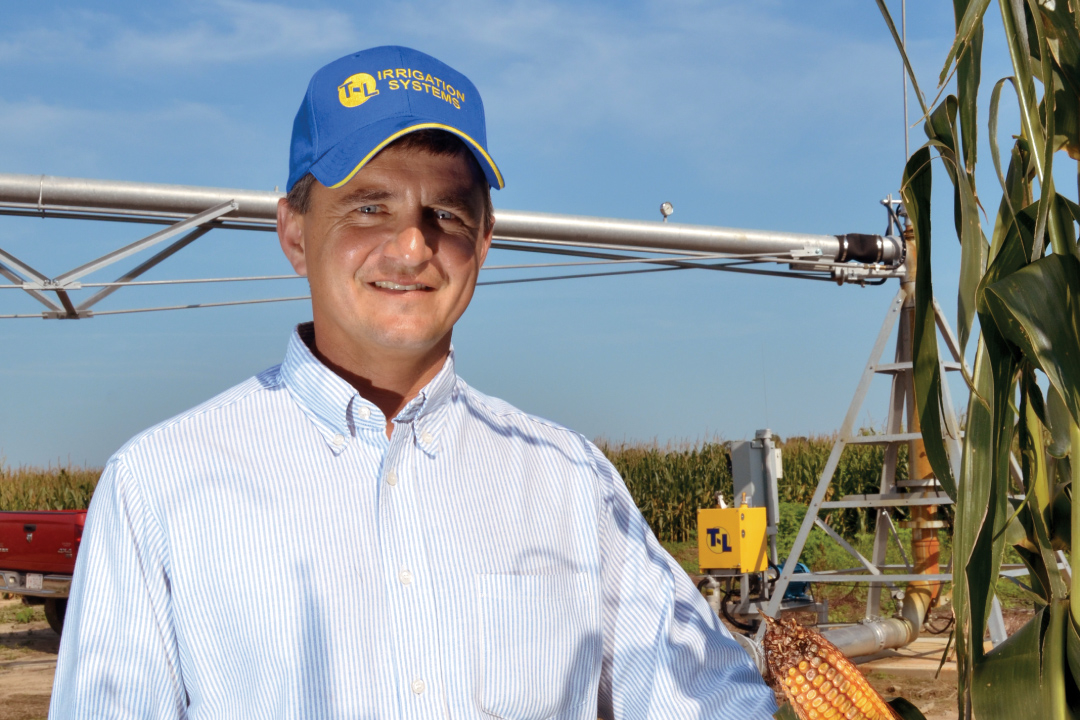